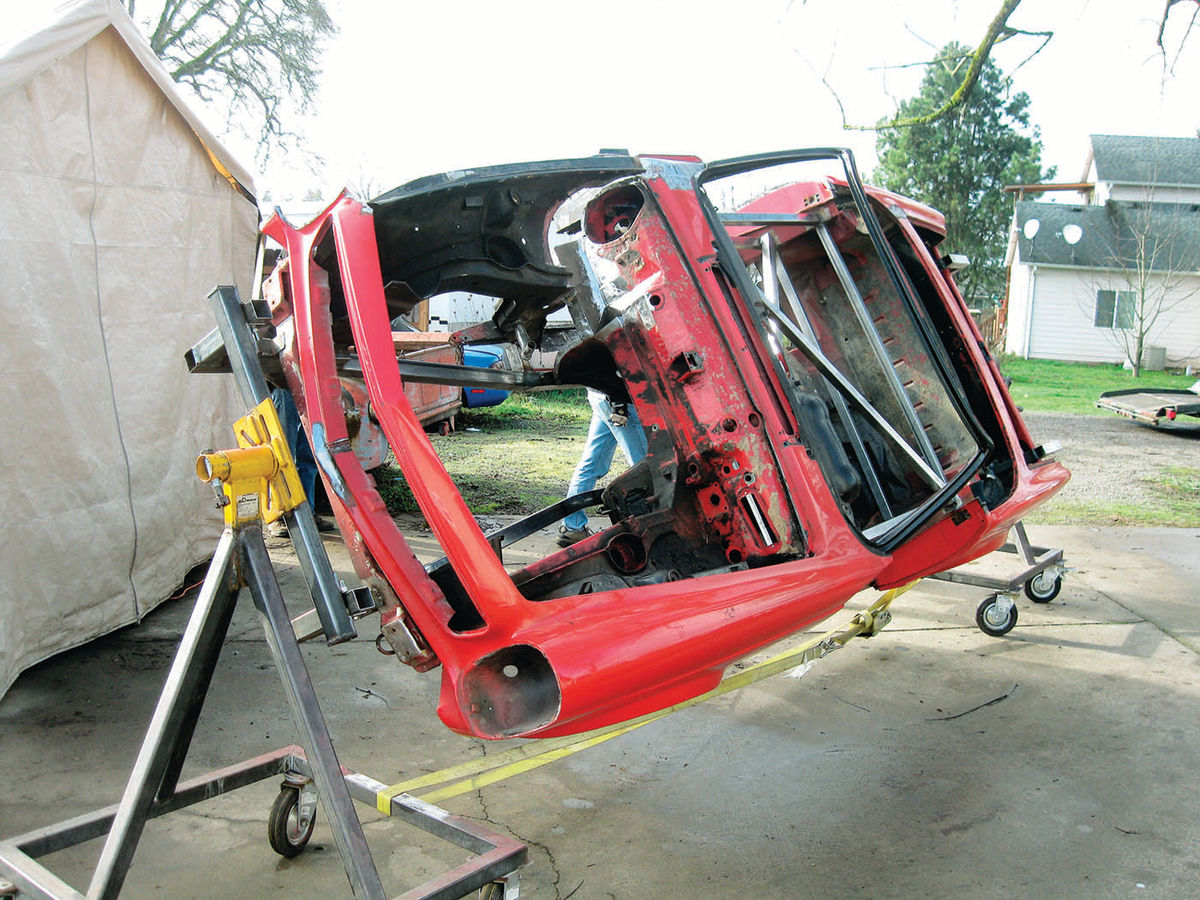 With a Change In Plans, the Car Will Be Chemically Stripped. Time to Inspect a Local Shop and Make a Decision.

Editor’s note: Reader Brian Bauske’s 1964 Mercedes sports car has turned into a much more extensive—and expensive—restoration project than he had anticipated at the beginning. The latest turn of events is that he now plans to go ahead with having the car stripped to make certain that all of the rust has been removed.

Comedian Jay Leno, who’s no doubt one of the world’s leading car buffs, was recently quoted as saying: “I tell people, if you’re looking for a car, go to the web site for that car. Every car has a car club with a web site, and every car probably has an older guy who’s stepping down or retiring and he’ll probably want $1500 more than what one is going for on the open market, but chances are it’s got $5000 worth of upgrades and improvements, and it’s been maintained. If you buy a Corvair off the street or from the Corvair club, the Corvair club car might be a couple bucks more, but you’re gonna get something that’s been taken care of and updated because it’s his car.”

Words to live by? I certainly didn’t take that approach when I bought my 230SL that is rapidly bankrupting me (more on that in a minute).

Let me give you an update on the Typhoon.

The car was in worse mechanical condition than advertised.

The brakes and steering/suspension were very good.

The exhaust is way too loud and is going to be replaced real soon.

The engine is quiet but blows oil out the breather because the PCV valve cannot keep up with the blow-by. It had a horrible misfire but a new set of points may have fixed that. The distributor still has problems. The dwell changes from

27-38 degrees as the vacuum advance moves. It’s supposed to be 32 degrees all the time. There is no thermostat in the engine so we had to control engine temp with cardboard in front of the radiator. We bought a thermostat for it in Hays but could not get a gasket.

The seller (expletive deleted)-up the glove box in the most peculiar way. It was hard to open so he found a different lock barrel and put that in, closed the lid and now it won’t open at all and he lost the old barrel that fit the original keys. AARRGH.

The shocks are bad.

The throttle didn’t open all the way because of a ripped rubber bushing that controlled the linkage, but we have fixed that now.

Everything else is as good as advertised. Oh, he told me it was rust-free, but I knew that could not be true. It isn’t rust-free.

The radiator and the gas tank leak.

In spite of all that, we had a great drive. Except for the crappy shocks it handled very well. I enjoyed sweeping past timid drivers on mountain curves. We were able to keep up with Interstate traffic and even hit 85 mph on a downhill. We averaged 18 mpg, but if we fix the misfire, I am sure that can be improved on. We had a blast, many questions and comments, and thumbs-up.

I intend to fix the exhaust...more on this later.

I am going to fix the gas tank leak.

We are going to fix the thermostat today. We will flush the cooling system and see how many leaks there are (there is leak-stop in the coolant).

Then I intend to drive it.

After reading my brother’s email, I just had to say, is this classic or what? I guess bringing old cars back from a near-junkyard condition—the automotive equivalent of death—with bruised knuckles and empty wallets—is our destiny as auto restorers. He’ll have it purring and looking like new in a few months.

Now, back to Affinity Imports in Salem, Oregon, where Troy Walker’s master assistant Steve Duffin has taken on my Mercedes 230SL as his personal project. The pictures in this episode are all his.

I Hadn’t Planned On This

As I mentioned in the last installment (April), I really didn’t want to have the car stripped. Not only would it commit me to a complete and costly paint job (plus the resultant fear of parking lot dings and rock chips), I was also worried about damage from the process itself. But I had promised you readers not to show any more of those gruesome rust shots!

There seem to be three major technologies for stripping cars: abrasives, chemical, or by hand. No doubt many readers have deep expertise and strong opinions on this topic, and I would love to read them. I’m not sure that what I chose would work for others, and I felt that I needed to make a quick decision.

From my understanding, everything from silica to baking soda to walnut shells has been used as abrasives for stripping. My concerns about this technique were two-fold: I didn’t want to take too much metal off, and if this is anything like the stuff my dentist uses to clean my teeth, it is very hard to get the grit out of the cracks!

As you saw in earlier installments, we first tried to remove all the undercoating by hand, which was very tedious. I spent some time doing this myself and saw firsthand how many imperfections there were in the paint and the body panels. That was when I reluctantly agreed to proceed with chemical stripping.

I’ve always believed that by simply walking in the door you can tell in a few minutes whether a shop is well-run.

As you saw in earlier installments, we first tried to remove all the undercoating by hand, which was very tedious. I spent some time doing this myself and saw firsthand how many imperfections there were in the paint and the body panels. That was when I reluctantly agreed to proceed with chemical stripping.

After performing due diligence, Troy and I boiled (ha ha) the choice down to two shops, one of which was MetalWorks Classic Auto Restoration of Eugene, Oregon, that does acid stripping. My friend Larry, with whom I once watched the London to Brighton Run, lives in Eugene and agreed to go over and check out MetalWorks.

By the way, if you’re not familiar with the Royal Automobile Club’s annual London to Brighton Veteran Car Run, it celebrates the 1896 Emancipation Run that followed passage of the “Locomotives on the Highway Act,” a very important measure in the history of the automobile. The act raised the speed limit for “Light Locomotives” from 4 to 14 mph, although this was reduced to 12 mph before the measure went into force. It also abolished the requirement for a car to be preceded by a man on foot with a lantern. It’s an extraordinary experience to see vehicles of every description, none built later than 1904, chugging across the finish line, and is highly recommended to all auto enthusiasts.

Now, back to my friend Larry and his report on the paint-stripping shop; slightly abridged:

On 1/7/2013 I drove out to MetalWorks, which is in a couple of industrial warehouse buildings. Spoke to Bo Keepers, who owns the paint & rust removal portion of the business (the other portion is restoration; the two work together). Bo gave me a good tour of the facility, and talked with me about the process.

The facility is nice. Very clean, lots of cars in various stages of stripping/restoration. I saw no cars being stored outside. I saw everything from parts about to be stripped, to parts that have just been stripped, to cars having body work done, to pre-painting, to just about ready to go home. I had no complaints.

Bo explained their process to me. I got a bit lost, but basically they do a hot caustic dip, followed by an acid bath. The caustic dip, which is pH positive (alkaline) removes pretty much everything and the acid bath restores the natural acidity to the metal.

The vehicle, once properly prepped, sits in the caustic dip for a day or two (although it doesn’t hurt to have it sit there for longer), then gets thoroughly washed with clean water, then goes into the acid bath for another day or two or three.

Bo did explain that the caustic dip can’t be used on aluminum, as it destroys the aluminum. Even the VIN tags have to be removed, because the bath destroys them.

I’ve always believed that by simply walking in the door you can tell in a few minutes whether a shop is well-run. You get personal attention, the place is well-kept, and people who work there seem to know what to do and are more or less happy doing it. I trust my friend Larry’s instincts in this area, so we decided to choose MetalWorks.

How did it turn out? We’ll talk about that in the next episode.