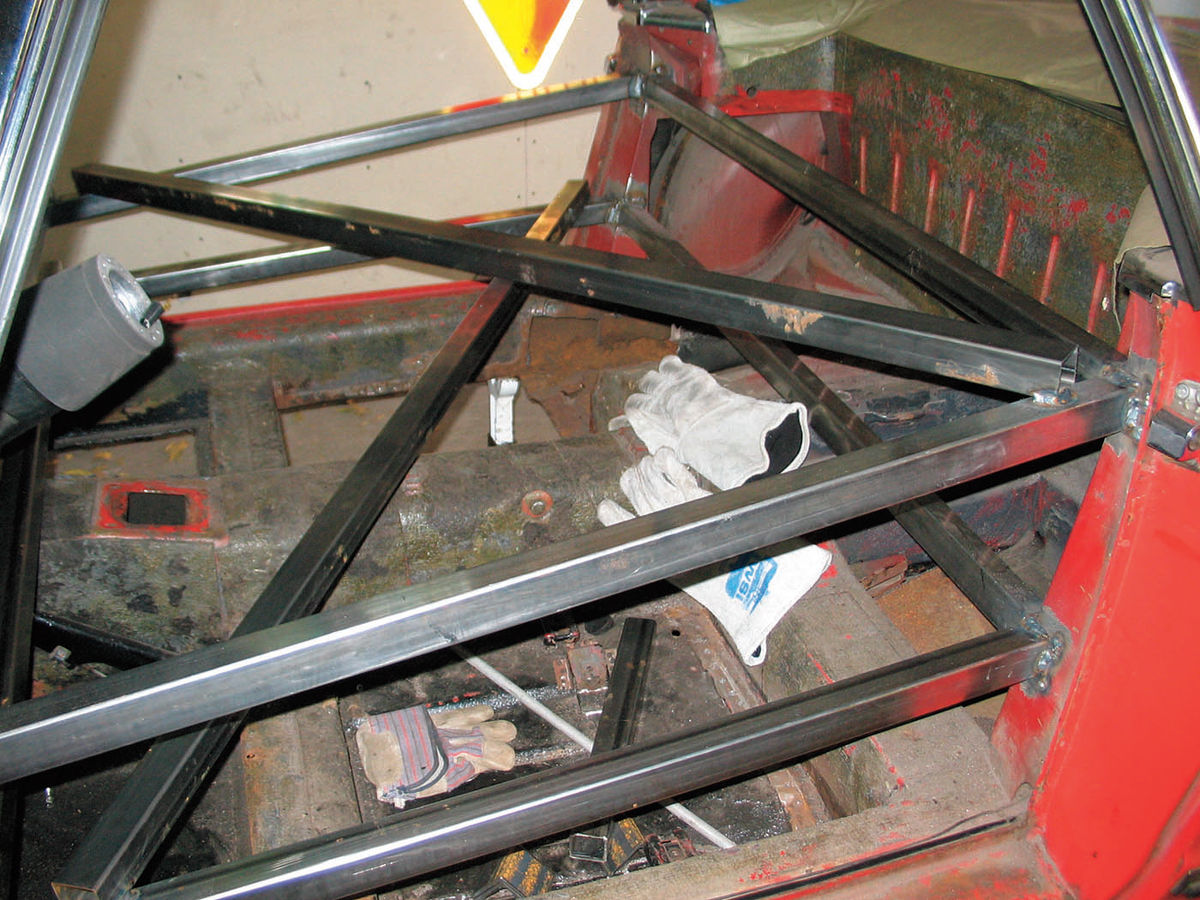 They Stiffened the Car’s Body and Lifted Its “Pagoda” Top. Then It Was Turned on a Rotisserie and…

Editor’s note: Reader Brian Bauske wanted a sports car to use as a regular driver and he found the vehicle he was seeking at an auction—a 1964 Mercedes 230SL. He then drove the car for 15 years before he decided to sell it. With that came pre-sale inspections that led to the discovery of hidden rust that threatened the structural integrity of the unibody car along with past body repairs that had been done in a sloppy fashion. This led to the extensive restoration project being documented here that included removal of the drivetrain and stiffening of the body prior to placing the Mercedes on a rotisserie. There have been 19 images in the first two installments so we’ll start here with Photo 20.

It’s an extraordinary sensation to see your beloved but disappointing automobile go shiny side down—safely! This was a huge confidence builder for me in this ever-expanding project and helped me get past my fear of “scope creep.” (After all, I’m a project manager by profession and this kind of fear comes with the territory.)

Restoration pro Troy Walker of Affinity Imports in Salem, Oregon, had ingeniously constructed a very impressive armature inside the passenger compartment (Photo 20) and fabricated sturdy mounts for the rotisserie at the front and rear of the car. He explained that even bumper mounts could not provide enough support at this point. This framework provides structure and stability and will allow the car to be supported once most of the lower parts of the unibody are removed.

Troy had also taken careful measurements in case there was some flexing, and assured me he would take it to a frame shop for final checks before reassembly.

Things were looking up at this point— literally—as the rotisserie was attached and the car raised (Photo 21).

The unique “pagoda” roofline of Mercedes’ W113 series has been described as looking “like a tree fell on it.” It was so poorly designed aerodynamically that the car was actually faster with the soft top! Please note: a) without a hoist (unless you have Larry Lyles’ cousin Bubba around) lifting one of these tops is more than-a-two-person job and b) never rely on just the hoist once it is suspended; add some additional straps. That bad boy is heavy!

As you can tell, the pagoda roof is not one of my favorite design features, but it’s clearly part of what I see as the car’s overall uncommon beauty.

I had loaned Troy my “pagoda hoist” so that the hardtop could be removed and suspended.

Taking It for a Spin

All of this preparation took a long time. But finally the day came when, as I mentioned earlier, the rotisserie was attached and raised. We turned the crank and over she went (Photo 22).

They say that every vehicle has some loose change in it. But this one dumped out nothing but rust and a few screws and washers. How much rust? Take a look at what was inside the frame rail alone (Photo 23).

Turning to the Dark Side

The far side of the moon was a mystery in my youth, as it is kept turned away from the Earth and no one had ever seen it. When it was finally viewed by Apollo astronauts, it turned out to be unlike the side we see up in the sky. For example it isn’t dark, as it has few of the huge lava seas that form the “man in the moon” or “rabbit” images we find in folklore.

So too the rust-ravaged underside of the Mercedes turned out to unlike the shiny side I’d shown off for 15 years. It was a mess! And it was very dark—with undercoating that had been sprayed thickly over the poor-quality welds used in a prior repair, and even over rust holes (Photo 24).

Furthermore, with the car turned on the rotisserie, scenes of appalling deterioration were now fully revealed to us, including rust around the battery tray, rust around a sub-frame attachment as well as some total rust-through in the car’s underside.

Lending a Hand Myself

Troy explained that because the undercoating would have a tendency to catch fire and emit noxious fumes when he used his plasma cutter on the sheet metal, it was necessary to start by removing as much of the coating as possible.

This is nobody’s favorite job, and Troy had already lost an employee who didn’t want to do it, so I volunteered in hopes of making a contribution to the project and avoiding having to pay someone else. Troy graciously agreed, and I went to work with a heat gun and scraper. A cautionary note: the heat gun on its high setting is at 1500° F and even a slight touch on unprotected skin will raise a nasty welt.

Anyone who has ever lain under a car to remove undercoating, with hot debris falling in their face, will appreciate the relative ease with which this could now be accomplished…with the car on the rotisserie and capable of being positioned at the most convenient angle at any time.

It was about a day’s work to remove enough to satisfy Troy and send me back to my former role as a spectator.

Next, we will continue to document the restoration process. In the meantime, I’ll be happy to take comments or respond to questions. Email them to a@autorestorer.com or write to Auto Restorer, PO Box 6050, Mission Viejo, CA 92690.