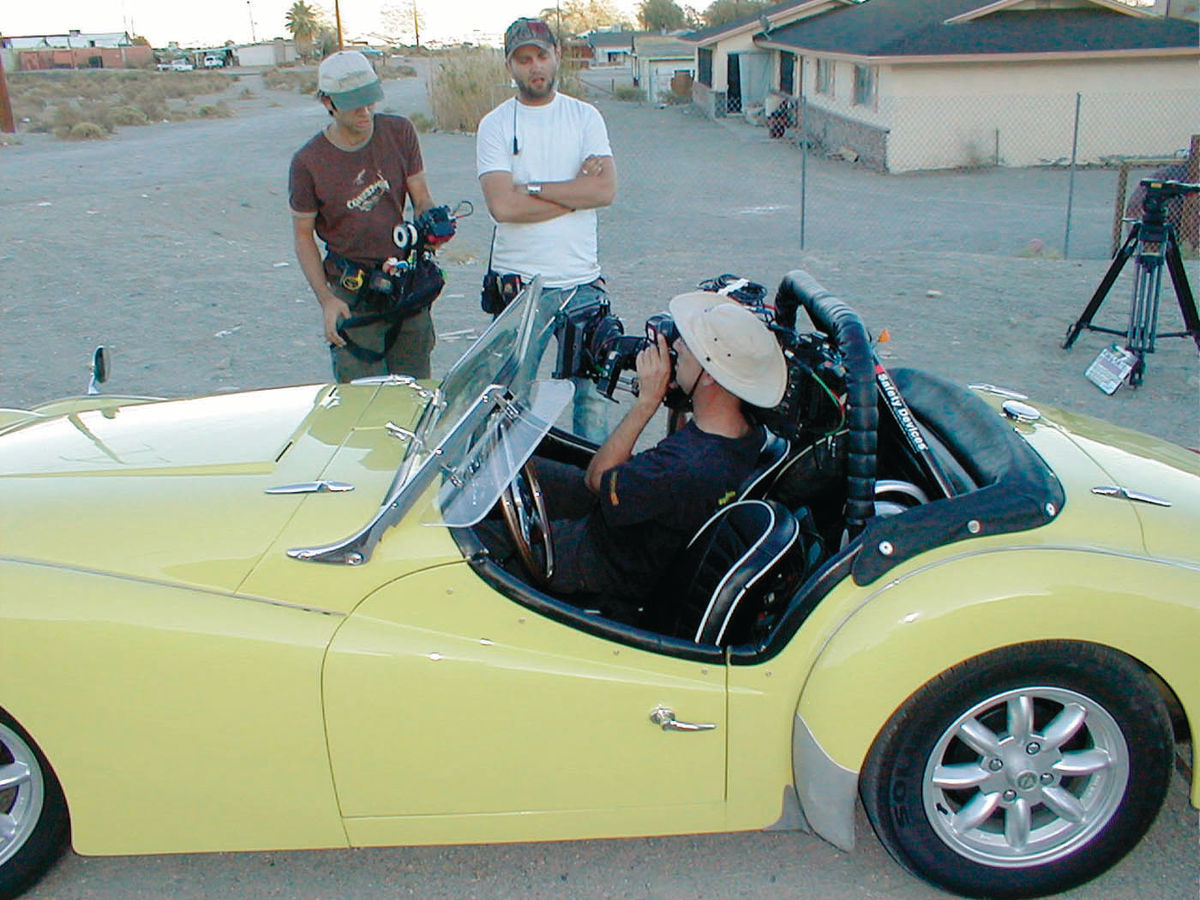 Loaning Your Vintage Vehicle to a Movie Crew Can Be Fun and a Bit Nerve-Wracking at the Same Time. What? You Say the Designated Driver Doesn’t Speak English?

T hose lucky few familiar with older British sports cars know that these vehicles provide their owners with many memorable experiences, mostly of a mechanical variety. But my 1958 Triumph TR3A (see AR August 2015) was also the portal into the exotic world of Hollywood movie making.

Living in the small town of Ridgecrest in southern California’s Mojave Desert, it was not unusual to see movie productions utilizing the area’s exotic locations. It was unusual, however, to be asked to provide a vehicle for one.

But one day the president of our local British car club was contacted by the producer of a movie to be filmed in the nearby town of Trona. The producer was looking for a Nash Metropolitan to be used in a key scene. There were no Metropolitans in the club, but the president suggested that they use my TR3A, it being one of the few club cars that was in running condition at the time, and also the “cutest.”

An agreement was struck and early in the morning of the appointed day in October I drove my freshly washed, waxed and vacuumed TR3A the 20 miles to Trona for its “15 minutes of fame” and my experience with movie magic.

Trona is a hardscrabble company mining town that lays astride California State Highway 178, one of the back routes leading to Death Valley. Its chief asset is Searles Lake, a huge dry expanse that last held any significant amount of water some ten thousand years ago, and is currently mined for minerals such as borax.

Trona also is the location of some huge tufa (porous rock) spires, known as the Trona Pinnacles, which you would doubtless recognize as the backdrop for many a science fiction epic, e.g., Lost in Space, Star Trek V, Battlestar Galactica, Planet of the Apes and numerous others. The mining operation is an ideal location for an episode of “Dirty Jobs,” which, coincidently enough, it was on this day of my Hollywood adventure. Because of its location next to the dry lake, Trona was deemed the ideal location for the movie production in question, appropriately titled “Dancing on a Dry Salt Lake.”

Editor’s note: Dominique De Fazio, the writer, producer, director and star of the film, described it this way:

Warner De Santis, a cosmologist obsessed with trying to hear God back in time at the “Origin of the Universe,” gets fired from NASA, drives to the Mojave Desert, crashes his car and remains in a small mining town until his car is fixed. There, Warner encounters persons that might be “spirit messengers.” Taking their words as instructions, he goes on a mission to find the “Place of Origin.” In the end, Warner finds in the ordinary world, close at hand, the spiritual meaning that escaped his reaching into the distance of space and time.

Editor’s note continued: The car he “crashed” was not the TR3A featured here. Now, back to Bo and his Triumph.

Upon arrival “on location,” I was introduced to Dominique De Fazio, who explained the Triumph’s part. The TR3A’s scenes consisted of being driven around the small desert town by three ladies in bikinis with a sign affixed to the car’s side advertising the upcoming musical “Hawaiian Holiday,” an integral part of the movie’s plot.

This was a small independent production company and many of the principals were from foreign lands. The actress who was to drive the TR3A, for example, was from Italy and spoke very limited English, and I, on the other hand, speak absolutely no Italian. Enlightening her on the intricacies of managing the stick shift of my Triumph was therefore difficult. And, at least initially, it was more than a little harrowing to watch.

The first scene involved our Italian actress sheparding the TR down a driveway, through a gate, and out onto the street. Fortunately, the driveway had a small slope, and it was agreed (through an interpreter) that she would just release the parking brake and coast our star down and out onto the road. This procedure called for explaining the intricacies of the Triumph’s parking brake release, which is counter-intuitive, as are much of our beloved British cars operations, but she accomplished it. In fact, she eventually drove the TR with great aplomb through the streets of Trona for the “Hawaiian Holiday” scenes. (I attribute this to her birthplace being the land of the Ferrari and that she was at least passably familiar with manual transmissions.)

It Was Totally Foreign to the Film Crew

My yellow Triumph was the source of great interest to the film crew, most of whom were young and totally unfamiliar with Little British Cars (LBCs) of the Triumph’s era, and when it was not being filmed it was surrounded by curious onlookers.

The Triumph’s scenes were completed in one day. I was offered payment but declined, the thoroughly enjoyed experience (and an excellent catered meal) being payment enough.

I have since learned that providing a car to a movie set can be hazardous, but I must say that everyone involved in the production was very solicitous and careful of the TR. Several years passed before I could find a reference to “Dancingon a Dry Salt Lake,” but it now has a website (www.dancingonadrysaltlake. com) that includes a production photo of the TR carrying the three bikinied young actresses. The movie was also the recipient of numerous excellence and “Best of” awards.

As mentioned earlier, an episode of the TV show “Dirty Jobs” was also being filmed in Trona that day. As I was driving the TR back home, I was passed by a sleek black sedan whose driver gave me the “thumbs up” as he passed. It was “Dirty Jobs” star Mike Rowe. Or, at least, I like to think that it was.