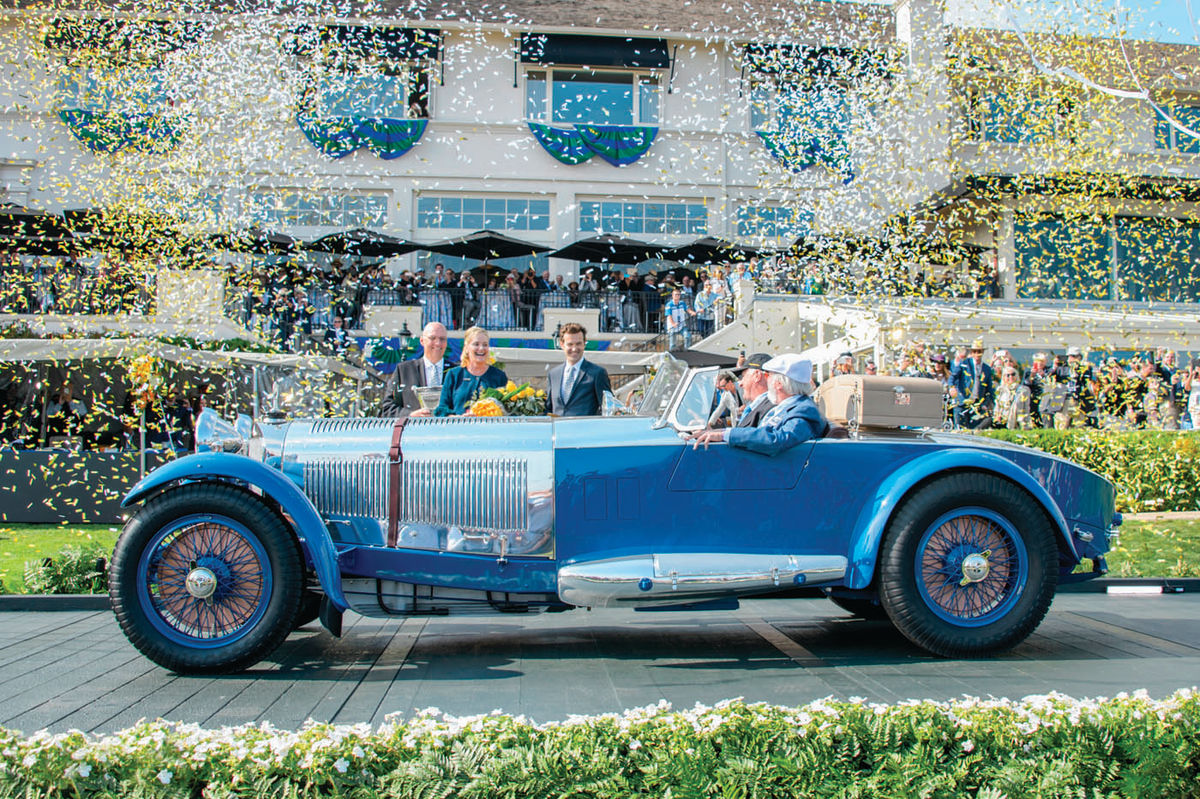 Expensive Cars, Wealthy Folks and Celebrities From Around the World. Let’s Peek Through a Knothole In the Fence to See What the Excitement’s All About.

It’s been called “the most beautiful parking lot in the world” and “the Super Bowl of cars.” Comedian Jay Leno, a noted car collector himself, once said it’s a place “where mere millionaires can compete against billionaires.”

However you describe it, the Pebble Beach Concours d’Elegance, held each August on California’s Monterey Peninsula, stands out as perhaps the most exclusive car show in the world.

That green scent in the air at the Pebble Beach golf links where the event takes place doesn’t necessarily come from the freshly mowed fairways; it’s the sweet smell of money emanating from the professionally restored rare and exotic vehicles on display and from the stacks of cash that trade hands at the upscale auctions associated with the concours.

Entering a vehicle into the show, as you might expect, is by invitation only and the concours participant list is international in its scope. Among the 204 vehicles competing this year, 165 were from the U.S. The remainder came from 15 other countries including Austria, Canada, England, France, Germany, Mexico, New Zealand, Slovakia, Spain and Switzerland, along with four vehicles that traveled all the way from China.

The Best of Show

To help demonstrate the rarefied competitive atmosphere that exists at Pebble Beach, consider the car that took the Best of Show award at this year’s concours. (As a point of reference, the cars are judged for their historical accuracy, technical merit and style.

Just a week before the show, Bruce R. McCaw’s 1929 Mercedes-Benz S Barker Tourer emerged from the restoration shop of Steve Babinsky in Lebanon, New Jersey. The boattailed car was quickly shipped across the country to where it captured the top prize at the prestigious Pebble Beach event.

“This Mercedes-Benz S Barker Tourer is a combination of speed, style and power,” said Concours Chairman Sandra Button. “Somehow these three elements—along with those fantastic torpedo running boards—become the very definition of elegance.”

The car, a sporting tourer, was first delivered to a Captain Miller on behalf of Earl Howe, who founded the British Racing Drivers’ Club.

“We’ve had the car for several years,” said McCaw, of Bellevue, Washington. “The question was whether or not to restore it. I always hate to restore something that doesn’t need it. But we finally found enough pictures that we knew the car needed to be restored.”

The car retains its original Marchal lighting equipment and chrome-plated parts along with its low-cut doors and unusual torpedo-style running boards containing tools and other ancillary equipment. As the story goes, the car’s rich blue color was inspired by a dress made of peacock feathers in the 1850s.

Ironically, in the final circle where three remaining contenders for Best of Show faced off against each other, Bruce McCaw was up against his brother John McCaw who, with his wife Gwen, competed for the top honors with their 1957 Ferrari 315 S Scaglietti Spyder. Also in the Winner’s Circle vying for that top prize was a 1932 Packard 906 Twin Six Dietrich Convertible Victoria owned by William E. (Chip) Connor of Reno, Nevada.

The runners-up didn’t go away emptyhanded, however. John and Gwen took first place in the Ferrari Major Race Winner class and Chip came out on top in the Packard class.

A Look at Some of the Other Winners and Show Cars

Since most of us (including the AR editor) don’t attend the Pebble show or encounter these types of cars in our daily lives, we decided to gather up a number of images from the concours operators and share them in this issue. Among the ones that caught our eye were:

• Ferrari Major Race Winner: 1957 Ferrari 315 S Scaglietti Spyder. (Note: This was one of the final three in the judging for Best of Show.)

• Packard: 1932 Packard 906 Twin Six Dietrich Convertible Victoria. (Note: This was one of the final three in the judging for Best of Show.)

Along with the money in evidence on the show field, as noted above a good deal of cash changes hands during the various auctions that take place in conjunction with the Pebble concours.

For example, Gooding & Company, which deals in high-end vehicles, is “the official auction house of the Pebble Beach Concours.” Its two-day sale this year brought in some $91.5 million.

The top draw for the first day of the Gooding auction, a 1970 Porsche 917K, became the most valuable Porsche ever sold at auction with a price of $14.08 million. That broke the previous Porsche record held by Gooding & Company which was set two years ago with the sale of a 1982 Porsche 956 that went for $10.12 million.

The next day at the Gooding sale a 1966 Ferrari 275 GTB/C set a new world auction record price for the model when it changed hands for $14.52 million.

Plans for Next Year

“Coordinating calendars can be complicated, but we want to make certain that everyone has a chance to enjoy the beautiful place that is Pebble Beach,” said Concours Chairman Sandra Button.

If you’re now having thoughts of enjoying that beautiful place and the beautiful cars there, be aware that in keeping with the upscale tenor of the event, ticket prices tend to be upscale as well. While advance ticket prices hadn’t been announced as of our press time, it was noted that as of next Aug. 1 general admission prices will increase to $375.

So unless you happen to be one of those millionaires or billionaires that populate the show field, maybe it wouldn’t be a bad idea to start setting a few bucks aside each time you get paid.