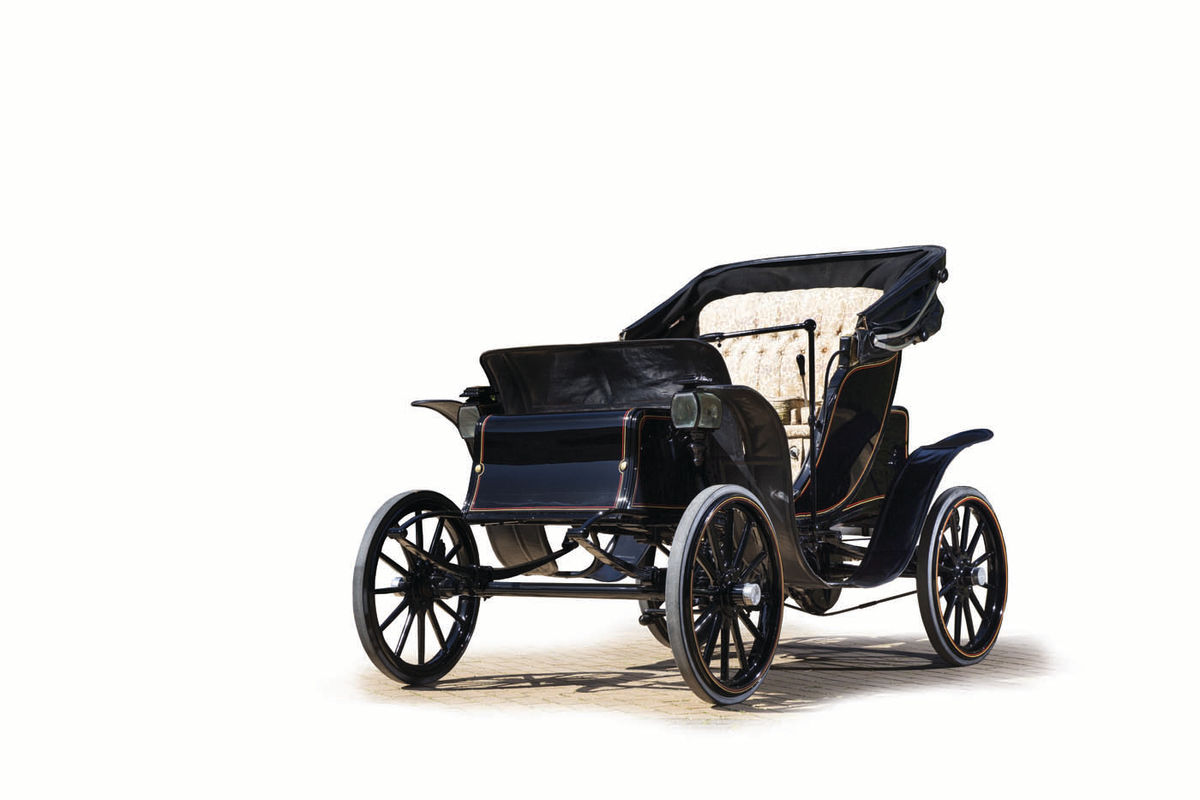 The advertising line for the electric vehicle certainly could catch your attention: “Friends who own Electrics go around in comfort and luxury without soiling their hands, gloves or clothing and without fuss or noise.”

And just where did we come across this bit of hype? Was it in an advertisement for the new Chevy Bolt? Maybe it was in a brochure for the Nissan Leaf…

No, this slogan was developed to promote the Pope-Waverly Victoria Phaeton seen above that hit the streets “without fuss or noise” a little more than a century ago in 1906.

The message was timely then because as you no doubt know, in the early years of the 20th century the electric car was far more popular than its gasolinepowered relative.

The earliest gasoline-powered cars were noisy and didn’t exactly smell like a spring day in a country field. But even if that didn’t bother you, many people, especially women, didn’t want to deal with a handcrank starter system.

Electric cars started without physical effort and ran quietly and odor-free. True, many of them were limited to a range of about 20 miles per charge, but cities were much smaller then and even a limited driving range was enough to get you safely to your destination and back.

However, the tide turned in favor of gasoline cars with the introduction of the electric starter on the 1912 Cadillac, the expansion of American cities and improvements in road quality.

Still, the lure of those early electrics and the role they played in the evolution of automotive transportation has remained strong, as evidenced by the recent auction sale of the two electric vehicles shown on this page.

Although both cars were built in the U.S., they found their way to England where they were sold by the auction house Historics at Brooklands in Surrey. Now, about those cars...

The 1907 Victor High Wheel Electric Runabout, the one that looks something like a buckboard wagon without the horses, sold for $44,000.

Here’s how the auction house described it for bidders: After the car was imported into the UK, the electrical system was “completely overhauled and the vehicle is now fitted with six Odyssey PC2250 high-capacity traction batteries (including a Vivian high-capacity charging system) which run for up to 65-75 miles on one full charge.” The car “has been recently re-painted...and has black leather upholstery. The wooden wheels feature narrow solid rubber tires. The Victor has a large bell to serve as a warning, due to the quietness of the car.”

The other car, the 1906 PopeWaverly Victoria Phaeton mentioned above, traded hands at the auction for $52,000. It was described this way: “An older restoration, this Pope-Waverley still presents well. The black paint is professionally striped in red and yellow and looks good.” After it was imported into the UK it was fitted with modern batteries and a new charging system, giving it a range of up to 50 miles.

The new owner of the Pope-Waverly exported the car to the Czech Republic. The Victor High Wheel Electric Runabout, meanwhile, is staying in the UK and the new owner has already taken it to a vintage rally in England.

All of which brings a question to mind... In 2116 will people gather to bid on a vintage Bolt and Leaf from the early years of this century?