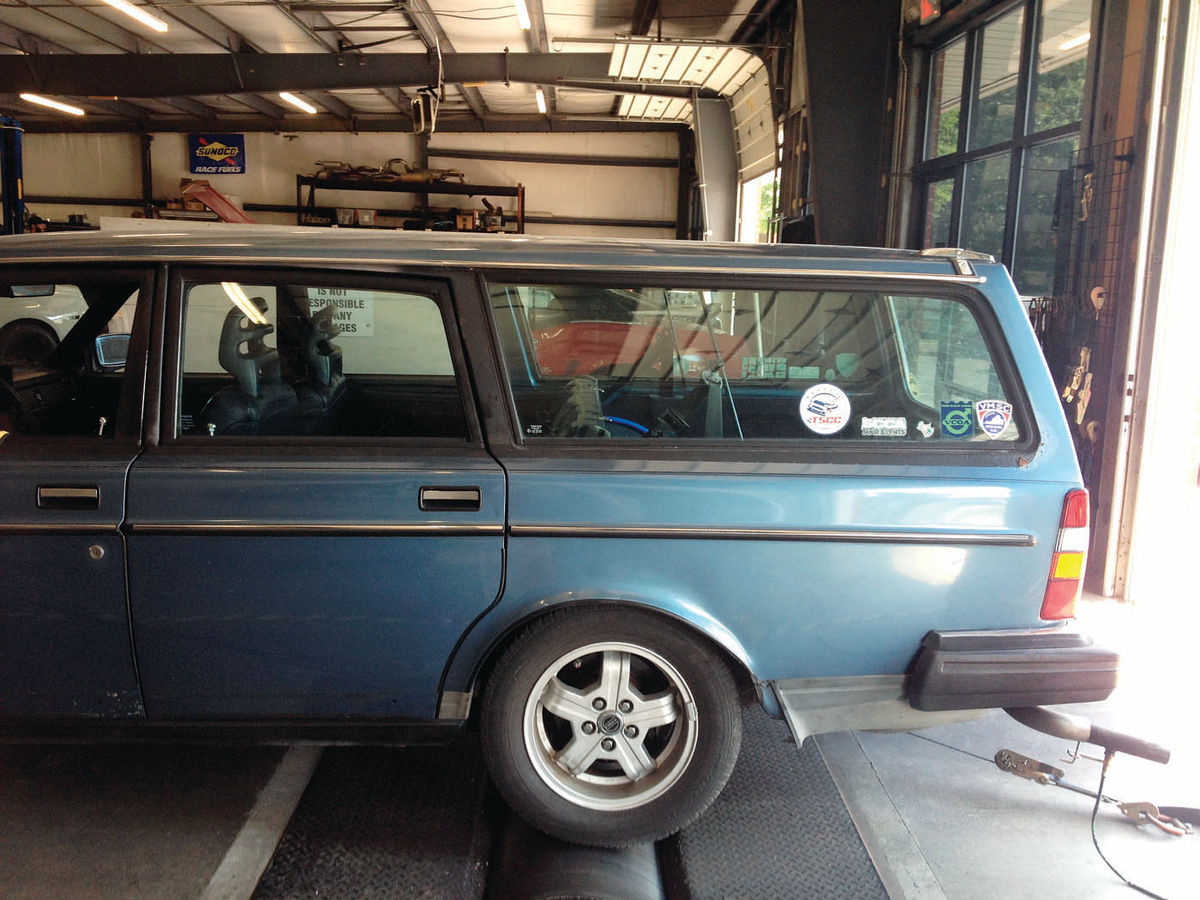 It May Seem Like It’s Going Against the Flow of Modern Technology, But Using Carburetors Instead of Fuel Injection Could Simplify a Vehicle and Its Maintenance. Let’s Get Involved With the Start of This Project.

Editor’s note: Carl Bauske and his Volvo wagon “Buster” have visited these pages before, most recently in February when he told us how he had adapted the car’s wheels to carry bigger tires. Now he’s back with another project involving his long-term Swedish car. Here’s Carl:

My daughter Amanda and I race a 1986 Volvo 245 wagon in SCCA autocross events in Central Virginia, just for fun. We have never been competitive against lighter, more powerful cars.

We just completed our 20th year racing, mostly with the same car, “Buster,” and he has racked up 278,000 miles. The class we run in now is F street prepared (FSP). This class allows certain modifications to your street car, such as: any size or type of DOT-legal tires, different springs, shocks and anti-roll bars. FSP class also allows any changes to the induction, ignition, and exhaust systems but no changes at all to the internal parts of the original-type engine.

Today, Buster has his original, simple and durable 2.3-liter in-line 4-cylinder engine with 5 main bearings, a cast iron block and an aluminum cross-flow cylinder head with 8 valves and a beltdriven overhead camshaft. This engine has never been rebuilt or overhauled and has no performance or other type of modifications.

In this series we’ll present the details of retrofitting a fuel-injected car (Bosch LH Jetronic 2.2) with old-style Weber carburetors and replacing his nonprogrammable Chrysler electronic ignition system with a programmable distributor called 123Tune.

On the other end, his exhaust system is already upgraded to a larger size through the use of Volvo 240 Turbo components and some special pieces to make the connection. We could use an aftermarket header, but we feel the original 4-intotwo manifold and 2-into-one headpipe offer little resistance to flow.

What’s Involved In This Project

The basic steps required to make these changes, while leaving the engine internals alone, are as follows:

1. Run the car on a chassis dynamometer to establish a baseline.

2. Replace his intake manifold and throttle body with a manifold that interfaces with two 45DCOE Weber two-barrel side-draft carburetors.

3. Modify his fuel supply system to deliver gas at 3.5 psi to the carburetors instead of 36 psi to the fuel injectors. We must also remove control over his two fuel pumps from the Bosch 2.2 ECU and rewire them for manual operation.

4. Replace his present throttle linkage with a suitable setup.

5. Replace his distributor and Chrysler ignition controller with a new programmable 123Tune distributor made by Albertronic in the Netherlands.

7. Remove any remaining under-hood items that are no longer required.

8. Run the car on the same chassis dynamometer and tune the induction and ignition systems for optimum performance.

Step 1 is finished. Last November we took Buster to EFI Performance in Richmond, Virginia, and they ran three dyno pulls, during which Buster spun the in-floor, 3000-pound dynamometer drum to 119 mph in fourth gear (6100 engine rpm). They accelerate the drum in each gear up to 4th and then at 2000 rpm, they open the accelerator and run the car up to the rev limiter. https://www.youtube.com/ watch?v=S2bpCxTczgU

(Photo 1 shows Buster on the dyno at EFI while Photo 2 is the results of dynamometer pulls 1, 2 and 3 with Bosch Fuel Injection.)

Exhaust analysis showed his fuel mix at wide open throttle (WOT) varied from a little lean (15.5:1) at 2000 to stoichiometric (14.5:1) at 6000. The EFI techs told us we were leaving some power on the table running so lean. They felt the engine would produce the most power at 13.5:1. The only way we can adjust WOT fuel mix on the Bosch 2.2 is to raise the fuel pressure and the Volvo fuel pressure regulator is not adjustable, but is controlled by intake manifold absolute pressure (MAP).

Why Are We Using Webers?

Since Edoardo Weber’s beginnings in 1925, inventing hop-up kits for Fiats, Weber has been a go-to source of power for both production cars like Alfa Romeo and Ferrari, and street and race cars that came with smaller, less-sophisticated carburetors. Normally, conversion to Weber is accompanied by modifications to the engine by changing the camshaft, installing larger valves, opening up the ports and raising the compression ratio, all to make the engine breathe easier. We did not have this option without opening the engine and changing our class. We hope to do that at some point, but since Buster is still making his full-rated output, (in fact, more) we are trying to leave the internals alone. I say more because we are seeing 115 horsepower and 130 ft.-lbs. at the wheels, not the flywheel. We think there are three reasons for this. 1. We replaced the mechanical fan with an electric fan. 2. The exhaust is opened up using the turbo pipes and muffler. 3. Volvo always seems to underrate their engine output.

After running down some leads, we found some Swedes with a go-fast shop for Volvos, KGTrimning, located in Södra Sandby, near Malmo.

As builders of outstanding rally and race cars, they could provide all kinds of goodies to get 300 horsepower out of Buster, but that is a slippery and expensive slope. Volvo 240 cars in Sweden are like Chevys here in the states. There are thousands around and they are easy to work on with abundant after market performance parts. However KGTrimning told us (warned us?) they have never bolted Webers on a stock engine, but they were very helpful in supplying the (impossible to find in the U.S.) parts we needed to do this project.

Webers are renowned for fine workmanship and ease of tuning. The throttle shafts turn in ball bearings. The venturis in the barrels can be selected for size. Our model 9 set comes with 36 mm venturis. The 45DCOE allows for easy removal and replacement of all the jets by removing a small cover. No gas is spilled and the air cleaners can remain in place. The bad news is that they need to be tuned, unlike today’s self-tuning EFI systems.

What do we expect to gain with this project? Truthfully, we have no idea. We are venturing into uncharted waters. If you examine the individual parts of the present induction system it is hard to find room for improvement. The intake manifold seems well-designed with little restriction. The equal length runners flow out of a plenum which the 56 mm throttle body empties into. Guidelines found on the internet indicate that 56 mm should be big enough for a 2.3-liter engine turning 6000 rpm.

One exception may be in the Mass Air Flow sensor (also called an AMM—air mass meter). The MAF sensor looks like a restriction. It has wire screen across both ends to protect the delicate parts inside and produce a laminar flow and it seems at least partly clogged with structures in the air stream, plus, it looks too small around. There are fuel injection systems that don’t use an MAF but they are expensive and would require a whole new ECU and ignition system anyway.

And we have set our hopes on a modest improvement in performance. If nothing else, we will gain complete control over fuel mixture and ignition advance timing. Since we cannot change any internal components of the engine, and the well-designed stock Volvo/Bosch package appears to be functioning well, there is not much room for a large Improvement. Because the 36mm venturis of the Weber’s four barrels should remove any limitations of the external induction system, we hope for some improvement in torque and horsepower.

Finally, it will be fun and amusing, challenging, and an automotive adventure. It will “clean up” a huge tangled mess of decaying wires, rotting hoses and tubes, and replace them with a lovely-to-look-at pair of Webers. I know that readers have expressed concern over the complex electronics in modern cars and whether they will be maintained and restored or scrapped because of the rising costs of repair. So this retrofit may be a harbinger of things to come.

Options Open for the Future

If, some day, Buster’s engine fails, we can build an engine with internal improvements. This would bump us into a “modified” class, but, hey, this is all about having fun with a good old car. To hear Buster on the dynamometer, turning 6000 rpm at WOT, it is very hard to understand how an engine with 278,000 miles can hold together.

Next we will cover step #2, removing the current manifold and test fitting the new one. This step could be a show-stopper. If we cannot fit the manifold and Webers in the engine compartment, you may see the parts appear on eBay.