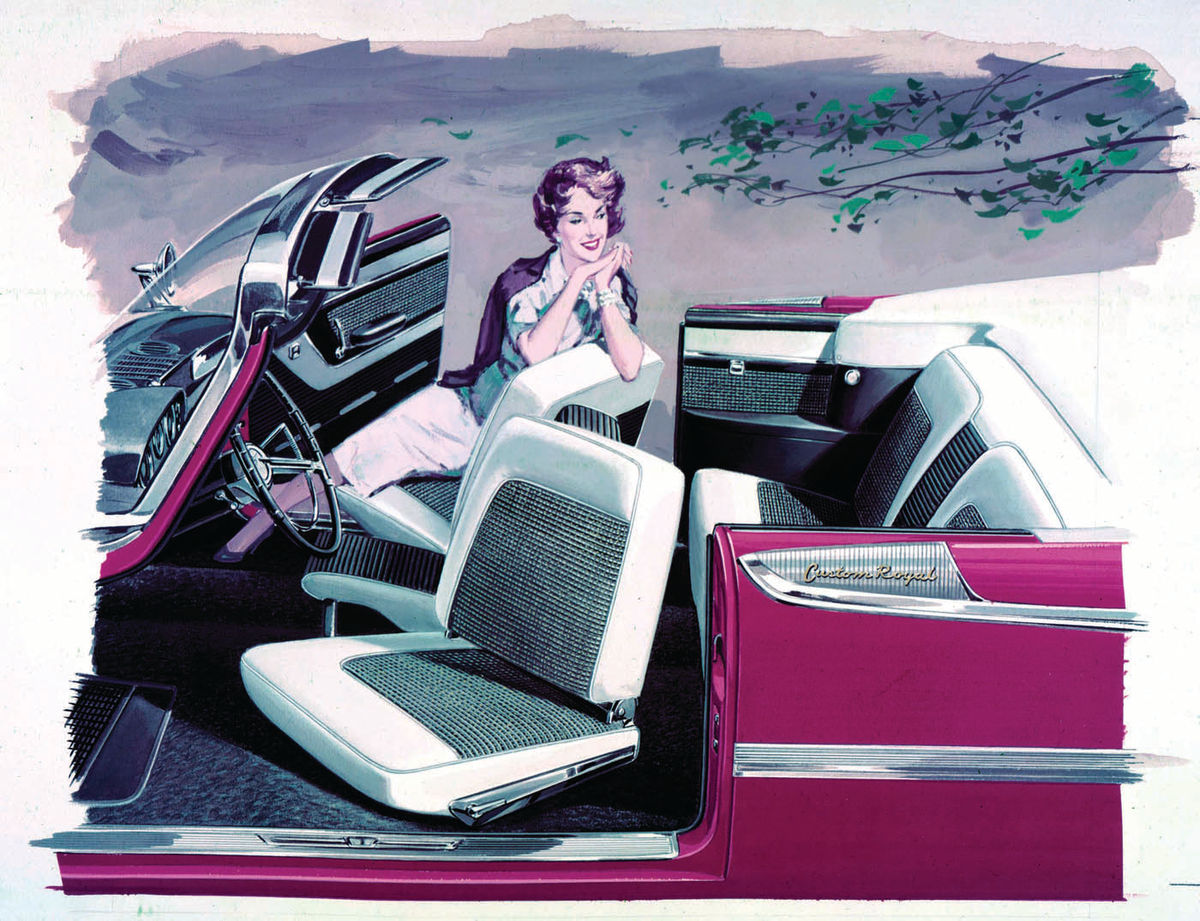 WHEN YOU TAKE a look at the moody advertising illustration on this page you can’t help but notice an eye-catching option that Chrysler offered on its premium cars nearly six decades ago.

And no, I don’t mean the attractive 1950’s lady perched daintily in the Dodge Custom Royal; I’m referring to the front swivel seats shown here in the “swivel-out” position.

This swivel seat option was introduced for 1959 and here’s how Chrysler described its method of operation: “The weight-operated seat swings out when you push a button and swivel your body. Outside of the car, push the button, and swing the seat in or out with your hand.”

Chrysler obviously saw this as a great new offering and promoted it with a good deal of advertising, with special emphasis on its intended appeal for women. One ad, which saw no reason to proceed in a subtle fashion, pitched the option this way: “Bless DeSoto for making seats that let you step out like a lady. What a relief to step out instead of having to crawl out of your car. No more hiked-up skirts or popping runs. The ’59 DeSoto’s Sport Swivel Seats let anyone slip in or out in one easy motion.”

Just imagine…no longer having to “crawl” out of your car while passersby stared at your hiked-up skirt and ruined stockings. An option like that would have to be an instant hit with consumers.

But as you well know, it wasn’t a hit. In fact, it tanked, and after one year the swivel seat disappeared from the list of Chrysler Corp. options.

Perhaps its failure was due to the fact that at the time men made most of the automotive purchasing decisions and they weren’t concerned about the possibility of hiked-up pant legs and stretched socks every time they crawled in or out of their car. Or perhaps the swivel seats made a direct trip from introduction to extinction because people came to the conclusion that they could pivot on their own bottoms as easily as they could on a mechanism that might bind or break within a few years of use.

Given that the special seats made such a quick exit from the marketplace, you might find yourself wondering, “Why didn’t someone think this through before they acted. Some thought and discussion among the corporate managers could have headed this off in the initial planning stages.”

Knowing how automotive companies work, however, tells us that any product change or addition does not happen quickly or become part of the company’s option list based on one person’s earnest suggestion. Engineers, product planners and marketing people have to study and test prototypes of the product as it works its way up the approval ladder of corporate committees and ranking executives.

And once the proposed product has made its way through that maze of planners and decision-makers, sometimes you put a Mustang on the market to the never-ending cheers of international consumers…and other times you find yourself with a batch of unwanted swivel seats on your hands.

Interesting tale, you may be thinking along about now, but is there a point to this discussion?

Definitely. As any calendar will tell us, we’re entering a new year and with that comes a proverbial clean slate for each of us.

Maybe last year you launched into a project with one of your cars or trucks and you were sure that you had figured out the best way to handle the situation and believed that you had the skills to work your way to a successful outcome. Maybe you even consulted with some of your car buddies to get their input on the best way to proceed with the work. And yet, after hours of thought and labor, you wound up with a whole lot of frustration and very little satisfaction for all your efforts.

Or maybe instead of having a bad time in your shop, you hit a wall in another aspect of your personal life.

But if the projects and personal interactions of 2015 didn’t work out the way you had intended, you probably have gained some additional insights to help you navigate your way through the coming months. And while that doesn’t offer any guarantees, it does mean that 2016 already has a leg up over last January.

So even if we planned and built the equivalent of a swivel seat in our lives last year, maybe we now have what it takes to do better this time around.