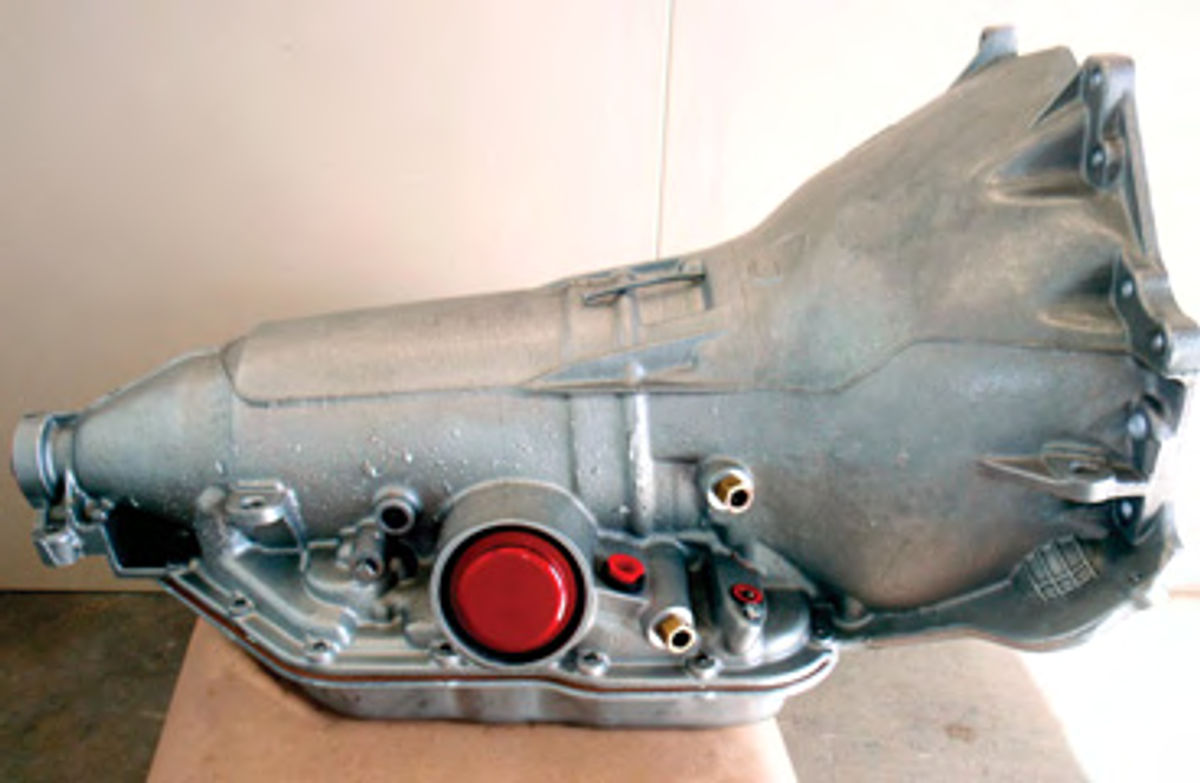 An Automatic Overdrive Can Improve Performance & Save Gas. Here’s a Look at Some Popular OD Transmissions.

FOR MANY OF us car aficionados, our greatest joy is driving our old rides. Whether It’s cruising to a carshow, enjoying a Sunday drive or using a vintage vehicle as a regular driver, many of us gear heads enjoy driving our old cars more than waxing them. Unfortunately, today’s higher driving speeds and the high cost of gas can take away some of the luster from that experience.

Fuel mileage improvements vary depending on the car and the original transmission, but many people report a highway mileage increase of 20-28%,with some extreme cases going as high as 40%. Other benefits include less wear and tear on the engine as well as reduced interior noise, which adds to the driving pleasure.

A Brief History of OD Transmissions

Automatic transmissions with Overdrive were first introduced in domestic cars in the 1980s to help meet increased federal Corporate Average Fuel Economy (CAFE)standards and mitigate the rising cost of gas.

Ford was the first of the Detroit Three to the market, introducing the Automatic Overdrive (AOD) in 1980. The AOD contained many elements of the C4 and FMX transmissions with the addition of an overdrive 4th gear.

GM followed in 1981 with the 200R4, which was based on the Turbo Hydramatic 200 with strengthened internals and an overdrive gear. The venerable 700R4 was first introduced in the 1982 Corvette.

Chrysler A518 overdrive transmissions were introduced on Dodge trucks in the early 1990s and are based on the 747 TorqueFlite.

All of the domestic overdrive transmissions mentioned (200R4, 700R4, AOD, and A518) were first introduced with hydraulic (conventional) valve bodies, and then later redesigned for electronic computer controls.

The best transmissions to retrofit are the ones with the hydraulic valve bodies because they can be run behind carbureted engines without computer controls. The electronic transmissions can be used as well, but they require a transmission controller (computer) which can be very expensive.

Each of these transmissions has an optimum range of model years to consider for your project. When they were first introduced, for example, they all had reputations for early failures. Over their production runs, there were a lot of fixes and improvements that resolved the durability problems.

As a general rule, the optimum transmissions for our purposes are the latest non-electronic units.

This article is focused primarily on the GM transmissions, but the basic information is the same for the Ford and Chrysler transmissions.

For the GM transmissions, there are two basic choices: the 200R4 and the 700R4. The early 200R4 transmissions had some significant problems, but the latter units are pretty stout. GM had enough confidence in the 200R4 to use it in the Buick Grand National, which is saying a lot. A stock-level transmission with fix-it upgrades is good to about 300-350 horsepower.In extreme applications, this transmission can be built up to handle up to 600 HP (one vendor builds these transmissions to 1000 HP), although this requires a considerable amount of work by a knowledgeable transmission builder. Set up properly, the 200R4 is a stout transmission (Photo 1).

The 200R4 has a few advantages over the700R4.The200R4 has a dual-pattern bellhousing, meaning that it can be used behind Chevrolet, Buick, Olds, Pontiac and Cadillac engines without requiring an adaptor (Photo 2). It has more even gear spacing and a 2.74 first-gear ratio, which is much less aggressive than the 700R4.The200R4is also 3 inches shorter, which in some applications makes for a better fit.

The optimum years for a 200R4 are 1986 through 1988. The Turbo Buicks and Grand Nationals have the strongest internals, but a good transmission shop can incorporate all of those fixes and upgrades for minimal cost into any 200R4 during a rebuild.

The700R4, later renamed the4L60,is considered by many enthusiasts to be the overdrive transmission of choice.It is stronger than the 200R4 in stock form and is readily available from a number of original applications, including trucks, vans, the Caprice,Camaro and Corvettes.

The 700R4 also was used in a number of smaller 4-cylinder cars—you’ll need to avoid using one of the “baby 700R4s.” The “V-8 case” transmission is the one to use. The 700R4 has a very aggressive low gear, which is great for a heavy vehicle and also can be fun for those with a lead foot and generous tire budget.

Because the 700R4 was used in so many applications, it was built in many different configurations.The Early Transmissions were weak, but were significantly improved over the 12-year production run. The 1981-84 transmission should be avoided if possible. The best years are 1987-91, although any 1985 and newer transmission can be upgraded when rebuilt (Photos 3 and 4).

Be aware that putting a stock V-6 transmission into a V-8 application is a bad idea. The transmissions used in 4.3- liter V-6 applications, such as Astro Vans and S-10s use the same hard parts inside, but have a different calibration and fewer clutches in the 3-4 clutch pack. However, the V-6 transmissions can be upgraded to V-8 specifications during a rebuild.

Installing an OD transmission will typically require shortening the driveshaft, moving the transmission mount forward or both. There are several suppliers who sell kits for installing overdrive into popular models of cars, but nearly any rear-wheel drive car can be upgraded to overdrive.

Table 1 shows a comparison of key transmission measurements for several popular transmissions. The best way to know what is needed is to use a tape measure and compare the existing transmission to the new one.

The 200R4 is the same overall length as a short shaft Turbo 350, and uses the same driveshaft yoke. However, the transmission mount is in a different spot, so the transmission crossmember will have to be changed or modified. The 700R4 is 3 inches longer and a little wider.

The driveline yoke for the 200R4 and 700R4 transmissions are the same size as a Turbo 350. In many applications the driveshaft will have to be shortened by about 3 inches, but the same yoke can be used. The Turbo 400 yoke is a larger diameter, requiring the yoke to be changed. On the positive side, the 700R4 is about the same length as a short shaft Turbo 400, so often the driveline does not need to be shortened. A good driveline shop can make any of these changes.

Wiring a transmission to lock up automatically in 4th gear is actually very easy and can be done when the transmission is rebuilt. Also, there are several kits available to make this change and in many cases it can be accomplished using the existing parts. This will be shown in detail next month.

There is arguably no subject more misunderstood than the Throttle Valve cable on these OD transmissions. There is a lot of misinformation on the Internet, but there is nothing to fear. It is easy to properly install and adjust the TV cable if you use the right parts.

Sow hatis a TV cable, anyway? The TV cable tells the transmission everything it needs to know to operate properly. This is what GM said about the TV cable in the 1991 C/K truck service manual:

“The TV cable used with the 4L60 transmission (700R4) should not be thought of as an automatic downshift cable. The TV cable used on the 4L60 controls line pressure, shift points, shift feel, part throttle downshifts and the detent downshifts. The function of the cable is similar to the combined functions of a vacuum modulator and a detent cable.”

The TV valve boosts the transmission line pressure as the throttle is opened and the engine makes more power. The key isto have the TV start building pressure in the transmission at the same instant the engine starts building power. It is vital for the TV cable to have proper geometry and be adjusted properly. It is literally the difference between life and death of your new transmission. Driving with a TV cable that is loose can cause the 3-4 clutch pack to burn up in just a few miles.

Late model GM carburetors and fuel injection throttle bodies have the correct geometry, while early Rochester and Quadrajet carbs do not. Aftermarket carburetors such as Holly and Edelbrock also require an adaptor to put the TV cable button in the right place. There are TV linkage kits available for nearly every carburetor, ranging from simple and inexpensive to quite elaborate.

If the carburetor has the proper TV cable geometry, adjustment is very simple. The TV cable is adjusted such that the cable starts to pull as soon as the throttle valves are opened and is as tight as possible (TV fully depressed) at wide open throttle. However, if the throttle linkage geometry is wrong it will be impossible to get the TV cable adjustment correct at both idle and Wide Open Throttle. Illustration 1 shows the proper geometry for the TV valve connection to the throttle shaft.

Some people try to “adjust” or “tune” the transmission shifts by adjusting the TV cable. This is not a recommended practice. With everything properly adjusted, the transmission should shift properly. Transmission “tuning” is best done by changing the governor springs or installation of a shift improver kit.

All modern 4-speed OD transmission shift patterns a reP-R-N-OD-D-2-1.When replacing a Turbo 200, 350 or 400 transmission, the shift pattern will be the same except that Overdrive is where Drive used to be. Each gear is offset by one position. First gear will be a new position past the existing 1st gear. In many cases the original shift linkage can be adapted to the new transmission with no problem and for a lot of applications you can buy an indicator lens with the proper markings. There also are a number of aftermarket shifters that can be used.

When replacing older transmissions such as an early Powerglide,Jet-A-Way, Slim-Jim or other early automatics, the shift pattern will be different. The neutral safety switch and backup light switches can be a problem for those cars with early automatic transmissions where Park and Neutral are in different locations than with the overdrive transmissions. Neutral safety switches can sometimes be adapted from a later car, although some installers bypass the switch entirely, defeating the safety feature.

Next: Follow along next month while we install a 700R4 into a ’55 Chevrolet Bel Air.

How -to Shift to An Overdrive