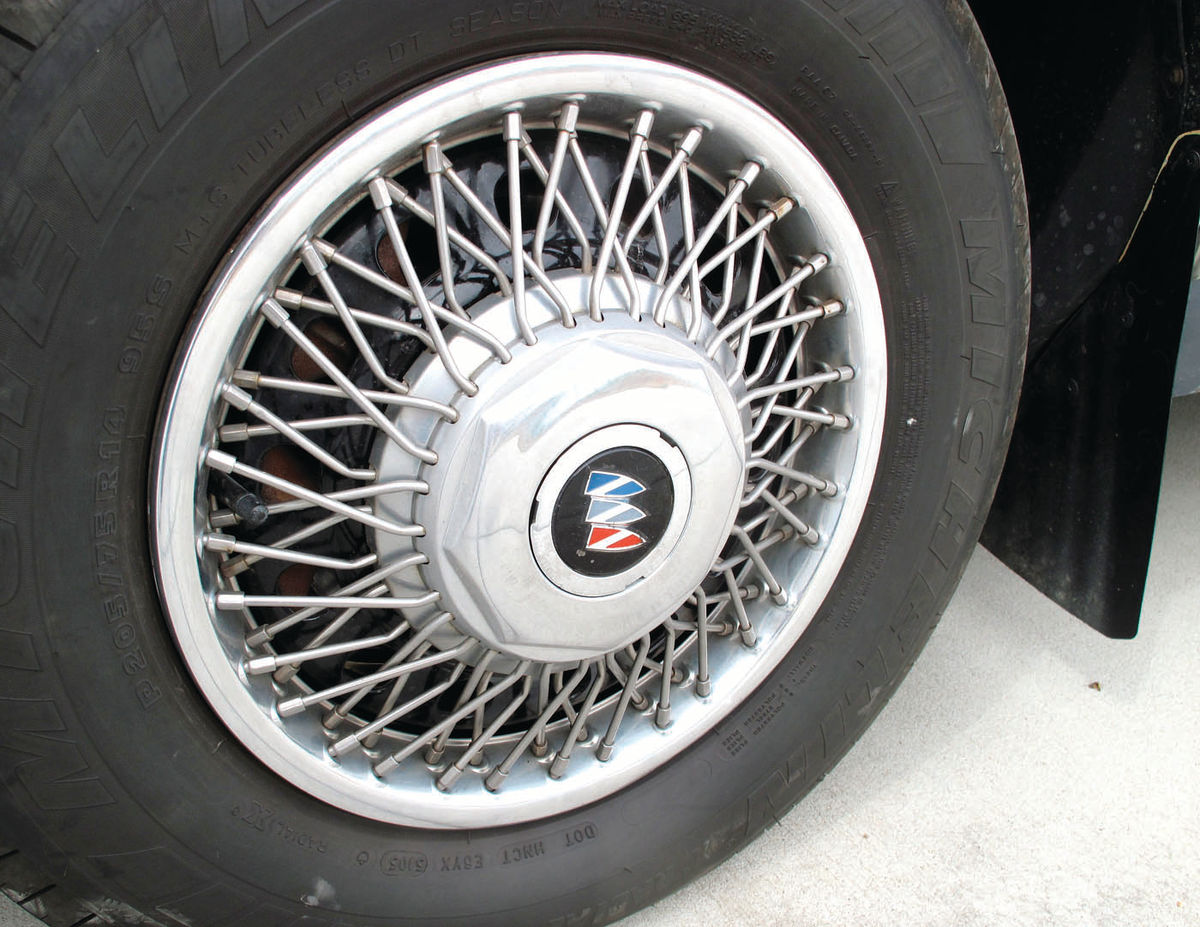 The Buick Is On the Road Once Again But It Has Experienced a Few Problems. Meanwhile, Parts Are Being Gathered to Keep the Park Avenue Running… for the Next Three Decades.

Editor’s note: In this final report, the author puts some finishing touches on his mother’s cherished 1987 Buick Park Avenue, a car he hopes to drive for another 150,000 miles. He also has taken parts stockpiling steps to help ensure that the car stays on the road for years to come.

After all the time spent under the hood and under the car, I was ready to make this Buick shine.

Parkhurst’s faux wire-wheel hubcaps had long lost their new-car glow. Reluctant to polish their spokes by hand—54 times 4 equals 216 spokes!—I tried a shop tip I once read about and ran them in my dishwasher. Unfortunately, even setting the dishwasher on the “pots and pans” cycle with the “high temp” option did nothing to improve the hubcaps’ luster (Photo 83).

Turning to other parts of the car, I got better results spending a day using traditional detailing methods. I cleaned the tires with Formula 409 and a scrub brush, cleaned the glass with a nylon Chore Boy and Bon Ami and washed the car’s very dusty finish twice with a sponge, carwash soap and lots of fresh water.

Don’t worry! Bon Ami is not a scouring powder, and the car’s owner’s manual actually recommends it as “a non-abrasive cleaner.”

Bon Ami (a French phrase for “good friend”) uses a no-scratch mineral formula of limestone, feldspar, soda ash and baking soda to remove the road film that can form on glass. Despite GM’s recommendation and my own positive experiences, the Bon Ami can warns: “Do not use on windows, glass, or mirrors.” So take my advice with a grain of feldspar.

Next, I used a damp chamois to wipe dirt off all door edges and openings, the trunk and hood openings and under both the trunk lid and hood.

After applying Flitz metal polish to all chrome, I used Meguiar’s Clear Plastic Cleaner 17 followed by Clear Plastic Polish 10 to brighten the taillights, cornering lights (on the sides of the front fenders) and the plastic emblems on the grille, trunk lid and hubcaps.

I revived the trunk lid, where the Buick’s 1987 clear-coat finish had turned hazy, by applying Meguiar’s Ultimate Compound with a sponge applicator and buffing it with a microfiber towel (Photo 84).

To nourish the paint before waxing, I applied Meguiar’s Mirror Glaze No. 7 with a hand pad. I sealed the nowglowing finish with Turtle Wax 2001 synthetic “polish,” which the maker claims will last a full year.

I finished my exterior detailing by applying Rain-X to all glass. Like a wax, Rain-X causes water to bead up and run off instead of producing a visiondistorting film. Thus ended a ninehour session reviving the car’s exterior (Photo 85).

The next day, I spent four hours spiffing up the interior, which included using Windex to clean inside the windshield, rear window and side windows.

After vacuuming the car’s deep-pile carpeting, I used a portable Bissell steam cleaner, which sprays on hot detergent and then sucks it up. A nasty brown stain on the rear passenger floor—cola or coffee?—came out so easily that I assume it was nothing more than mud.

I vacuumed dirt from the stitching in the leather upholstery and then cleaned and conditioned the leather A Restoring part 7 The Buick Is On the Road Once Again But It Has Experienced a Few Problems. Meanwhile, Parts Are Being Gathered to Keep the Park Avenue Running… for the Next Three Decades. By Curt McConnell 83 Though unimproved by a trip through the dishwasher, the Park Avenue’s 30-year-old hubcaps still look sharp with Fiebing’s saddle soap.

After wiping it with a 409-soaked rag, I treated the dashboard with Boss Gloss vinyl conditioner, a POR-15 product.

A trip to town and back means driving the Buick on six miles of gravel roads, a condition that calls for some extra protection. To supplement the front mud flaps I’d previously installed to avoid stone chips on the rocker panels and lower door edges, I decided to add rears. It meant buying a set of generic flaps and trimming their inner edges to match the contour of the Buick’s fender well lip (Photo 86).

They looked great...for a week. Ultimately, however, they proved too rigid to absorb the beating they received (Photo 87). So I’ll cut two new flaps out of a big rubber mud flap designed for a truck and shape them like the shattered ones that they’ll replace.

After having diverted so much time and money to the Buick’s revival, I was ready to ride! But Parkhurst had other ideas.

The first sign of trouble came when the “check engine” light announced what I’d already observed: the Buick’s V-6, never smooth at idle, had begun shaking like a cold dog.

While poking around under the hood, I discovered why: I’d neglected to reconnect a wire to the fabled mass airflow sensor in the snorkel tube between the air cleaner and engine. One problem solved.

Next, the engine began dying, typically right after I’d start it, shift into reverse and begin backing out of a parking space. I suspected low transmission fluid.

When I checked it warm with the engine idling and the car on a level surface, the fluid didn’t even register on the dipstick. After I added 1 1/2 pints, however, it read “full” again. I closely inspected the tranny pan, the new lines and axle shaft seals I’d just installed— everything involving the transmission (or, technically, transaxle)—but I spied no signs of leaks.

Apparently, the torque converter drank some more fluid after I last checked it. Moreover, I needed to add a full quart of mixed antifreeze to the radiator’s overflow tank.

The lesson: after servicing and refilling a car’s transmission, emptying and refilling its cooling system—even simply changing the oil and filter— drive the car a few miles and then recheck the fluid level.

But Then the Engine Died In Traffic

As it turned out, however, the low tranny fluid had nothing to do with my engine troubles. In fact, the dying engine was merely a symptom of a bigger problem: the car’s entire electrical system was intermittently shutting down.

I didn’t notice this right away because the engine generally died while I was backing up and, therefore, not looking at the dashboard. I’d turn back around, put the shift lever in neutral, start the engine again and be on my way.

But, finally, when the engine died while I was driving, I noticed a rather big clue: Instead of displaying the full array of red and amber warning lights, the entire dashboard had gone dark. Only by turning the ignition key off and on repeatedly did I finally get power back.

In this granddaddy of all dead-car episodes, the Buick had died without warning while I was driving down a busy four-lane city street. Boom! No turn signals, no power steering, no power brakes. No Gene Vincent CD, for that matter. (The tune playing: “Race with the Devil!”)

I was, fortunately, in a left-hand turn lane and facing no oncoming traffic, which allowed me to muscle the dead, still rolling, Park Avenue through the turn.

On a relatively quiet side street, I put the still-coasting car in neutral and cranked the engine. It started immediately; I finished my drive with no further drama.

A Phone Call Solves the Problem

During a Big Think, I conjured up many potential maladies: serious wear in the ignition switch, for instance, or a short circuit inside the steering column.

Fortunately, a mechanic with his wits about him diagnosed the problem during a two-minute phone conversation. Given the number of leads attached to it, he said, a malfunctioning ignition switch typically would cut power to a few devices but not all. Had I disconnected the battery recently?

Ah, yes to that. I’d removed it to replace the engine timing gears. In fact, the side-mount positive cable on the battery, while snug, nonetheless still moved by hand. I hadn’t wanted to over-tighten its small bolt for fear of stripping out the threads inside the battery. I overcame that fear now, however, by cinching it down tightly. The engine hasn’t cut out on me since.

Mostly New (But With Some Flaws)

There once was a young man with a dream…he wanted to restore the new-car magic to his mama’s beloved luxury liner and continue to drive the car “forever” (as measured by a human lifespan).

As you know from having read this series, I am—never mind the wrinkles!—that young man. So...how did it go?

In brief, despite tackling some difficult and frustrating repairs, I not only learned some things along the way but I’m generally satisfied with the results.

Furthermore, I painted the steering knuckles; replaced the transmission filter, fluid and fluid-cooling lines; detailed the body inside and out, which included polishing the wheel paint and even wire-brushing the rusty lug nuts, and washed the engine.

To top it off, I hired shops to replace the steering gear and power steering pump and flush the steering fluid; aim the headlights, align the wheels and install a new muffler and tailpipe.

Parkhurst still has flaws but they are down to a manageable number. For example, the headliner is loose in places, the gear-selector needle has broken and the left-rear door’s automatic lock rarely works.

Stockpiling to Last Until 2047

As I repair the current problems, I know new ones will arise. It simply goes hand-in-hand with owning and driving an older car. I think of it as continuing education for an owner-mechanic. As long as I have the time and energy, I’ll stay committed to keeping Parkhurst running well and looking sharp.

To further commit, if not overcommit, myself to Parkhurst’s longevity, I’ve decided to build up a parts stash. The 30-year-old car will be—what?— 55 or 60 years old by the time it hits 300,000 miles.

Will components such as new struts, ball joints, tie-rod ends, in-tank fuel pumps, wheel bearings, drive axles, oil seals, motor and transaxle mounts, headlight bulbs, wheel cylinders, caliper rebuild kits, air filters, transmission filters and the like still be available for a 1987 Buick in 2047? And, if so, will they be sold at reasonable prices? Call me an old-car survivalist, if you will, but I’m banking on “no” to both questions and therefore have accumulated a sizable parts inventory (Photo 88).

Speaking of stockpiling, I stumbled into a sweetheart of a deal while I was working on Parkhurst. One of the repair shops I use had a clone—yes, another 1987 Park Avenue—in dire straits, waiting to be towed away to a salvage yard. It was the shop’s loaner car, sidelined by a hammering piston rod at 282,000 miles.

When the shop’s owner offered to sell it to me for its scrap value, $300, the car followed me home (on a trailer), a four-wheeled parts stash for the ages (Photo 89).

With two parts cars in the barn and a basement full of new parts, Parkhurst and I are ready for the future. My only question now is: what will it take to persuade the Classic Car Club of America to declare the 1987 Buick Park Avenue a Full Classic?