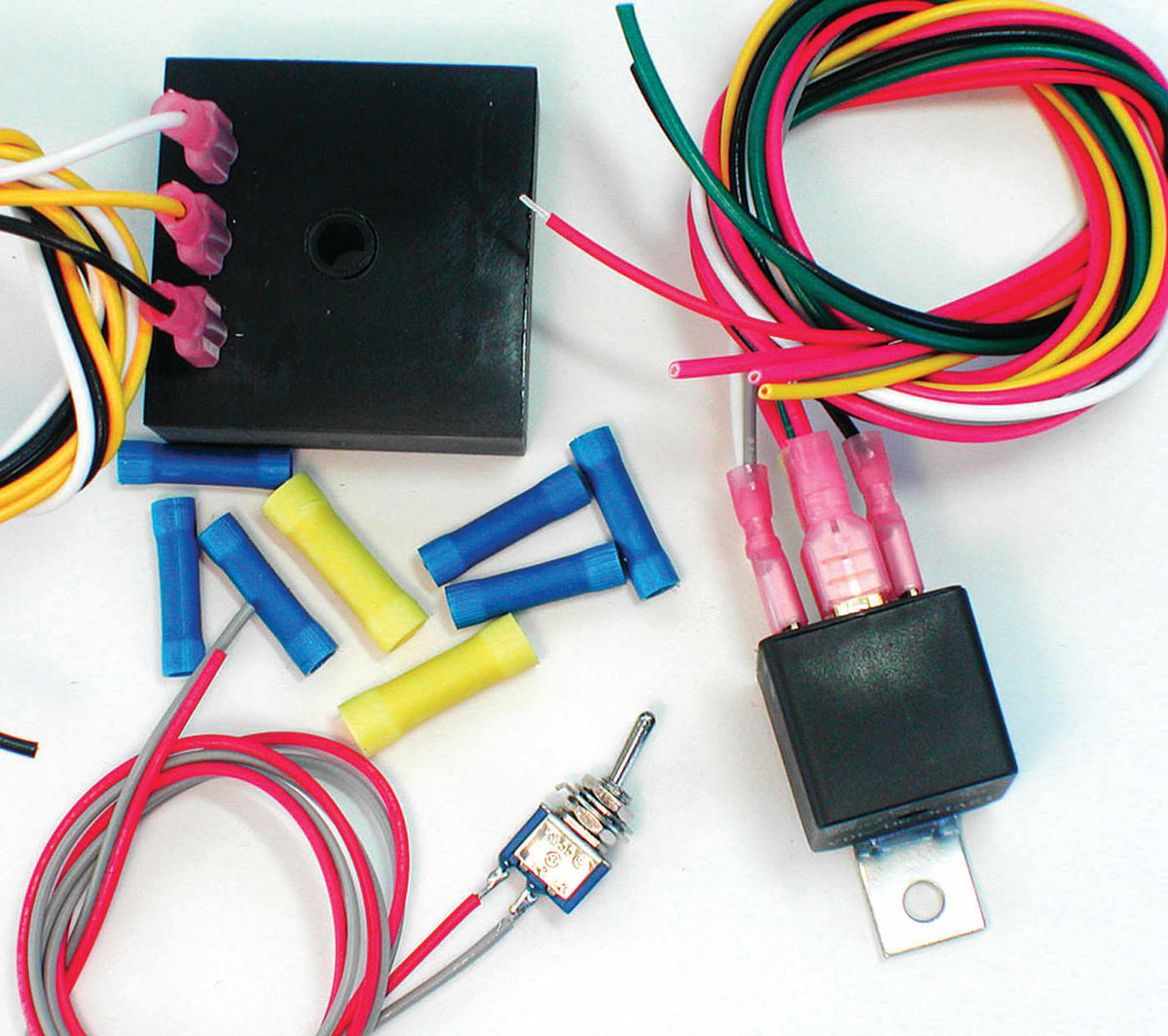 Protect Your Vehicle From Thieves

Start By Taking Action to Keep Your Special Vehicles Safe. But Consider Recovery Steps as Well.

PERHAPS YOU’VE SPENT years—even decades—searching for your dream car. Or maybe you took part in a long, hard restoration as you painstakingly fabricated parts, unearthed original components and nitpicked to get every inch just right. Now that you have your classic whole and gleaming in the garage, you want to keep it there…and not stolen by a thug.

But then some methods of theft protection deter from your vintage vehicle’s appearance and authenticity. Fortunately, you do have options that don’t involve drilling holes.

Methods of stopping auto theft can be divided into two basic categories: prevention and recovery. Going with one or more tactics from each category offers more comprehensive protection than just going with either prevention or recovery.

“Time and attention are the biggest threats to burglars,” says Marc MacYoung, the self-defense and theft prevention professional behind nononsenseselfdefense.com.

“Time” refers to the minutes it takesa thief to get a vehicle moving. The longer it takes; the better the chance that someone will become aware of what’s going on and do something to stop the theft. “Attention” includes anything that will make you and others aware of what’s taking place so the thief can be stopped.

Start With the Basics

Many of the preventative measures involve the same type of common sense approaches you would use with any valuable possession. They’re pretty lowtech, too. For example: Keep your vintage vehicle locked, don’t leave the keys in it (even in your locked garage), and never leave it unattended in public. If you do park and leave it in a public place, turn the wheels hard to the left and use the parking brake so it’s harder to tow. Although these aren’t impregnable defenses, they are simple and help protect your car or truck.

Physical barriers such as a block or lock for a wheel, brake pedal or steering wheel detract from your car’s appearance at shows and are fairly easy for most thieves to foil. Although these barrier devices are inexpensive, they aren’t all that effective except to prevent the least likely type of crime: a spontaneous theft committed by a passerby.

Car alarms attract attention to your vehicle, which may be useful when it’s in your garage and you’re at home, but false alarms have conditioned city dwellers to a point where they ignore or are annoyed by the sound of a car alarm. In other words, it’s come to a point where they’re largely ineffective. Like an alarm, keeping a dog to alert you to intruders may be helpful if you’re at home when the theft attempt happens.

“There are ways around dogs,” MacYoung said. “If someone’s really, really after the vehicle, they’ll get it. Dogs buy you time. They alert people. They won’t protect your property but will alert you.”

Getting Some High Tech Help

While your car is at home, it’s safest. But it’s sensible to take a few precautions beyond the common sense advice given above. For instance, you can install motion sensing lights and alarms outside, along with security cameras.

He also recommends a few low-tech measures, such as bars and curtains on garage windows, a reinforced entry door, and an overhead door that cannot be manually opened from the outside.

If a thief makes it past all of those barriers, high-tech devices can prevent the car from starting.

A Ravelco device can help to prevent auto theft by interrupting the flow of electricity to the car’s systems. If the person attempting to start the car doesn’t have the 16-pin male plug that goes into the Ravelco port installed in a concealed location under the dash, the car will not start. With 100,000 possible combinations, it’s very unlikely that a thief will stumble upon the right one. The company says that in 37 years in the business, it has installed four million of its units and not one vehicle has been stolen (ravelco.com).

“One of the common ways of stealing older cars is to pop open the hood of the car, run a wire from the battery to the ignition coil, and use a screw driver to start it,” says Richard Biscevic, owner of California Ravelco in San Carlos. “With the Ravelco, that approach will not work.”

Providing the Ravelco is installed by a licensed installer, Biscevic says there’s no way a thief can take the car. As an added deterrent, the wires under the dash are wrapped in a protective steel covering wrap.

“We install the female end of the unit under the dash where it’s not as visible but you can get to it,” Biscevic said. The system costs $469.95, plus sales tax, installed. The company gives discounts in California and to AAA members.

Steve Watson, owner of Watson’s StreetWorks in Bozrah, Connecticut (watsons-streetworks.com), agrees that electrical interruption is the best way to go for safety that is convenient, unobtrusive and reliable. His company sells hidden switches that disconnect the battery, including a toggle and a key lock system.

“It’s quite easy to put a switch into the ignition feed, a relay and have some other small, hidden switch somewhere,” Watson said. “You can allow and shut off the ignition system by flipping the switch. It’s a very simple and relatively inexpensive way to go. For less than $40 you can buy all the pieces you need.”

Their most popular product is their own: Road Kill, a timed ignition shut-off.

“It does a similar thing to a switch, except it allows the car to be started and it will run for 10 seconds, but it will kill the ignition and set off a horn alarm,” Watson said. “It kind of suckers the poor guy in and makes him think he can get away but the whole thing shuts down.”

It doesn’t draw off the battery, which makes it a good method for cars that aren’t driven much. The current price is $89, installed.

Tips for Shows and Traveling

While at a car show, your best bet is to never leave your car unattended. Bring along someone to stay with the vehicle so you can buy lunch or take care of other necessary matters, for example.

“Going to shows is like going to the grocery store for car thieves,” says John Abounader, executive director of the International Association of Auto Theft Investigators in Clinton, New York (iaati.org). “People are standing there telling you how good their cars are and what they’ve done to them.”

Naturally, car guys and gals are proud of their vintage vehicles, but they also may unknowingly be “selling” a thief on the value of their classics.

Some proud owners have even been known to display a plaque with their name and address on it near their vehicles. Don’t do this. Instead, use only your first name and hometown or for further contact, an email address or cell phone number. Otherwise, it’s too easy for a thief to track you down and steal your car.

“If you’re a thief, you’ll go to a show and find out where those people live,” Abounader says. “Sooner or later, without anti-theft devices on your car, it’s like taking candy from a baby.”

Traveling with your classic makes your car more vulnerable if you’re staying overnight. MacYoung suggests you and fellow car club members or exhibitors hire someone to watch your cars at the same lodging. A security guard can make the difference between resting well at night and jumping every time a motor rouses you from sleep.

To prevent theft of a car on a trailer, Steve Watson uses an artificial ball in the trailer hitch with a high-quality padlock.

“You can also incorporate an alarm system on the trailer with the help of a battery,” Watson added. “I’ve been told by tow truck drivers that no one pays attention to car alarms anymore. My key word is still deterrent.”

If the truly unfortunate should occur and a car or truck is stolen, it can suffer costly damage while in the hands of the thieves, leaving you with a potential insurance headache and additional restoration work even if it is returned to you. However, since you can’t prevent the most determined professional thief from overcoming your theft deterrents and taking your vehicle, a recovery method can be of great importance.

LoJack is among the best-known tracking systems. Using radio frequency signal technology, thieves can’t disappear as easily behind steel and concrete to hide stolen vehicles. Many law enforcement agencies like using the LoJack technology as an aid in tracking stolen cars. In addition, it doesn’t draw off the battery and can be installed per your specifications so it doesn’t interfere with your car’s ability to participate in shows.

According to the company’s website, lojack.com, “you have a 90 percent chance of recovering your stolen car, truck or SUV—usually within 24 hours and often within just a few hours.”

The company offers a money-back guarantee for the cost of LoJack for vehicles that are not returned. The cost is $695, including installation, with no monthly fees.

The biggest problem with LoJack is that the service is not available nationwide. If you live in or are visiting one of the 22 states where it isn’t offered, it won’t work. Or if you’re near the border of one of those states, a thief would only need to drive a short distance to disappear.

As an alternative, adding another cell phone to your plan provides another option that’s both affordable and easy. Many carriers charge only $10 per month, plus taxes and fees for that extra phone connection. Charge the phone, turn the phone’s GPS mode on, set the phone’s ringer to silent, wire it into the battery and stow the phone out of sight in the car.

The caveats here are that the phone will drain the battery if the vehicle is not driven frequently enough, and if it’s driven out of range after it’s stolen, the GPS won’t help. Furthermore, concrete or steel barriers may block the signal. Many cell companies offer virtually nationwide coverage, which is more far-reaching than LoJack. On the other hand, in states with LoJack coverage, law enforcement officers are already accustomed to tracking stolen cars with LoJack. They may be more hesitant to track your phone (and thus your vehicle) with a site like http://www.instamapper.com or http://www.sat-gps-locate.com.

Should someone steal your vintage vehicle, report it immediately to the police and you could consider contacting someone like Abounader of the IAATI.

“I’ve recovered cars like a Shelby Cobra Mustang that was taken in New Jersey,” Abounader says.

The owner spotted it at a car show in Carlisle, Pennsylvania. He reported it to the local police, but “they had no clue,” Abounader says.

“He contacted me and I ended up stopping it at the border to Canada.”

Among the dozens of classics Abounader has recovered, one was a 1962 Corvette that had been missing for 28 years. While unusual, it can happen.

But in the final analysis, I’m sure we’ll all agree that it’s far better to try and ensure that your classic stays right where it belongs…and doesn’t take any unfortunate, unscheduled trips.