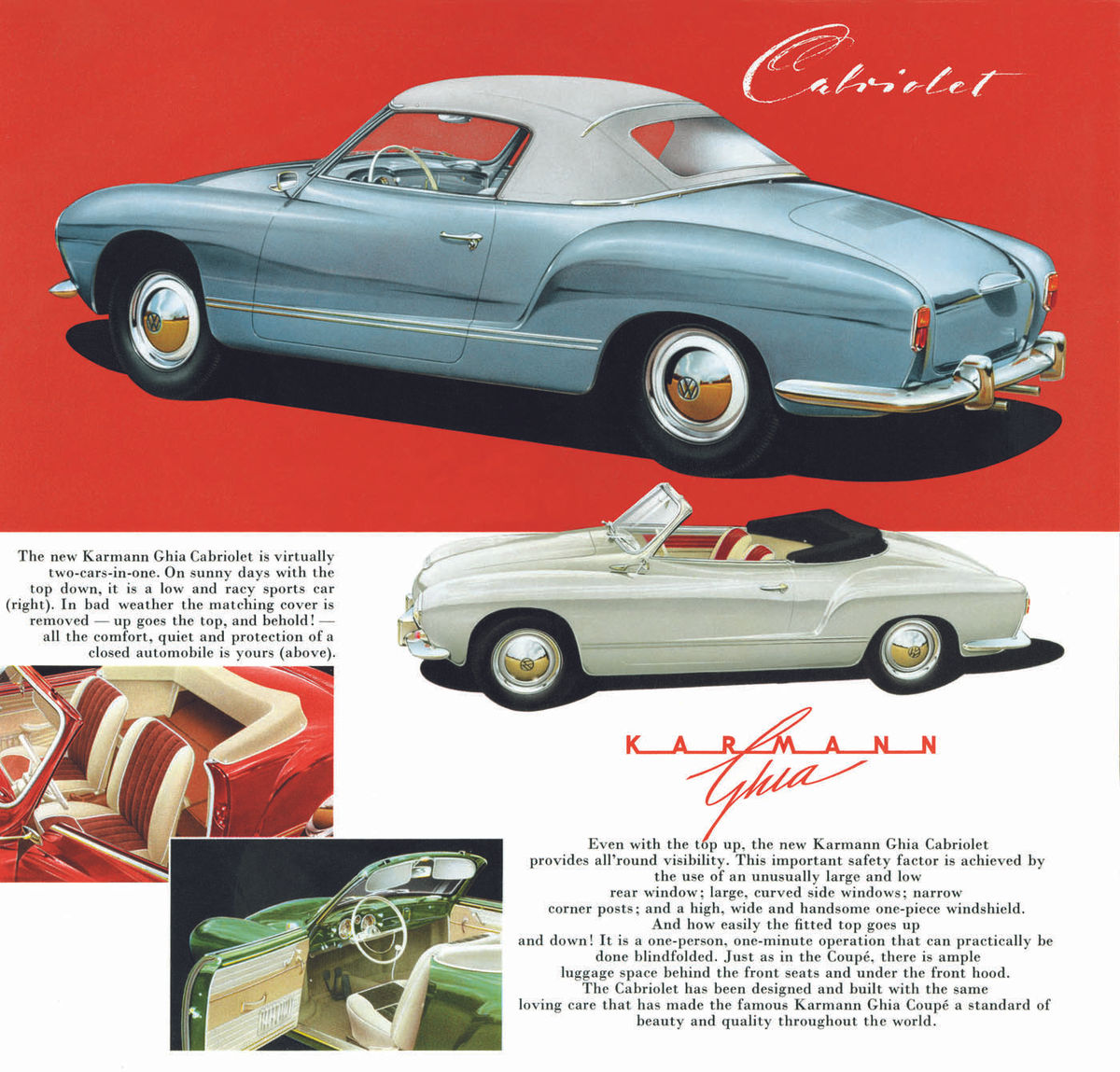 It May Be Not Much More Than a Beetle with Special Sheet Metal, But When You Drive One You’d Swear It Has a Sporty Feel.

“The purpose of this book is to tell you the complete story of aircooled Volkswagen automobiles. The primary focus will be on the Type 1 Volkswagen, which most of us know as the Beetle or ‘Bug.’ We’ll cover every year of this model from 1946 through 1979 and will then take an overview look at the 1980-2003 Beetles manufactured and sold in other countries. We’ll also study the three generations of air-cooled Volkswagen buses, several types of Karmann Ghias and the Notchback, Fastback and Squareback models that arrived in the early 1960s in an attempt to broaden the company’s product offerings.”

We’ve always thought that the Karmann Ghia is an especially interesting vehicle so we decided to share a section of the book that deals with this uncommon VW. Here’s John:

The Karmann Ghia Type 14 is more or less the Beetle with a sporty body. Ghia designer Luigi Segre styled the car in Italy and it has much of the look of some early 1950s dream cars that Ghia did for the Chrysler Corporation. Karmann of Osnabruck, Germany, hand-built the Karmann Ghia body. There were no performance upgrades but the lighter sports car was faster. In 1961 Volkswagen introduced the Type 34 Karmann Ghia, which was a Type 3 Volkswagen with a different look.

The Type 14 took its bow at the 1953 Paris Auto Show and turned out to be a popular car. On July 14, 1955, Karmann held a press review and exactly two months later the now-named Karmann Ghia was shown at the Frankfurt auto show. The Karmann-built coupe had changes from Ghia’s prototype, including a twin-nostril nose, curved window glass, wider window trim, full-width bumpers, repositioned front blinkers and restyled air intake louvers on the deck. The Ghia fender badges were also repositioned.

As noted, 1956 was the first year for the stylish Karmann Ghia coupe that blended the mechanical components and structure of the Beetle with a handsome Italian-designed coupe body with 2+2 seating. Karmann of Osnabruck, the firm that manufactured the body, also turned out Volkswagen convertibles.

The Karmann Ghia driving position was lower than that of a Beetle sedan. Motor Trend described it as being “more like Porsche.” The shapely body had a sculpted line leading from the lower door, upward and along the rear quarter panel. There was more of a hood up front than on the Beetle. The roofline was low. It looked great but a tall person’s head would touch the roof. Rear quarter windows were installed, along with curved door windows.

Motor Trend said, “The interior finish is flawless and chastely classic.” There were upholstered, individually adjustable bucket seats in front and a foam rubber-cushioned bench seat in the rear. A storage compartment and full-width parcel tray were behind the seat backrest. The wide doors had large storage pockets. The back of the upholstered rear seat folded down to provide a platform that doubled the storage space for luggage and personal belongings.

Either cloth or leatherette upholstery was available. Driving controls were like those of the Beetle, but not identical. The small grilles on each side of the nose admitted floor-level fresh air. The rear end was less skitterish than that of the Beetle, thanks to the Karmann Ghia’s front-end roll bar and wider frame rails.

The sports car had better low-end acceleration than other Volkswagens. “On a lonely stretch,” declared Motor Trend of their test coupe, the “Ghia’s high-speed behavior proved impeccable.” According to the magazine, this was a result of the car’s lighter weight, better front-to-rear weight distribution, and streamlining. Nevertheless, the Karmann Ghia’s 0-to-60 time was a slow 34.2 seconds. (Editor’s note: For a much different 0-to-60 statistic, check out the Mustang on page 32.)

The Karmann Ghia’s horizontally opposed, overhead-valve four-cylinder air-cooled engine was shared with the Beetle. It used a light alloy block, heads, and finned cylinders with cast-iron cylinder liners. Bore and stroke was 3.03 x 2.52 inches (77 x 64mm) for 72.7 cubic inches (1192cc). It had 6.6:1 compression and 36 horsepower at 3700 rpm. It used four main bearings, solid lifters and a Solex 28 PCI downdraft carburetor. A top speed of over 70 miles per hour was claimed. It had 6-volt electrics.

“Analyzing the Growing Volkswagen Family,” said the tag line on the cover of the May 1956 issue of Motor Trend. The cover photo showed the new Karmann Ghia coupe, a Volkswagen Microbus and thirteen Beetle sedans. Inside was a comparison road test of the Karmann Ghia coupe.

Production of Karmann Ghias was 2452 units this year, but it would quickly double. At the Frankfurt International Automobile Show in mid-1956, Volkswagen introduced a Karmann Ghia Cabriolet. The open car would be put into production on August 1, 1957, when the changeover to 1958 models occurred.

Volkswagen was proud of its new sports car and put out a classy tri-fold brochure heralding the 1957 coupe model. “Every flowing, graceful line… every breathtaking detail…every magic touch of luxury and comfort of the beautiful Karmann Ghia Coupe has a truly ‘Continental’ accent,” said the copywriters. It pointed out that Ghia, of Turin, Italy, was a renowned European car designer.

“Even at sustained cruising speeds you get a king-size 32 miles per gallon,” the sales catalog claimed. “Maintenance costs are phenomenally low, too…75,000 miles without any major repairs is common!”

Again upholstered, adjustable bucket seats were up front and a small, benchtype seat in the rear could be used for occasional accommodation for two passengers.

“Beauty is definitely not just ‘skin deep,’” read the sales folder. “You’ll find that top-notch engineering skills and careful consideration have been lavished on each detail.” There was a fancy new bright metal horn ring designed for just the Ghia. Special paint, deeply upholstered front bucket seats that adjusted fore and aft and up and down, a bench-type rear jump seat, a spacious front storage compartment and new easy-to-care-for vinyl door panels were among the fine details. The original roller-type accelerator was replaced with a pedal type.

This year the Karmann Ghia line continued to offer the coupe that was introduced in 1956 and added the Cabriolet that entered production in the summer of 1957 as a 1958 model. Volkswagen literature pointed out that the Karmann Ghia was “styled and engineered by Europe’s finest master craftsmen.” Part of the engineering effort for the Cabriolet went into beefing up the body structure for topless driving.

The coupe’s form-fitting front bucket seats again had large, expandable storage pockets. The gearshift and hand brake were conveniently arranged between the front seats. The upholstery materials were fabric and imitation leather for durability and ease of cleaning. Squarer new bumper guards were seen.

The large velour-trimmed area in the rear added to the coupe’s practicality. The seat back again folded down for additional storage. The interior side panels were made of durable, washable, and fade-proof plastic in matching colors. Extra sound absorption was achieved by a perforated plastic roof lining.

The new Karmann Ghia Cabriolet (also called a Sports Cabriolet) was virtually a two-in-one-car according to Volkswagen. On sunny days, the owner could put the top down to have a lowslung, racy sports car. In bad weather, the owner could remove the matching tonneau cover and put the fabric top up.

The Karmann Ghia’s instrument panel had a new fuel gauge between the electric clock and the speedometer. Other features included a two-spoke steering wheel with horn ring and opaque sun visors that were contoured to the lines of the roof and the windows.

It seems the Volkswagens were already becoming collectibles at the time. The August 1958 issue of Motor Trend had a classified ad from Charles Pasco of Seattle offering to trade his ’55 Morgan Drophead Coupe for a Beetle or Karmann Ghia. Possibly he contacted D.E. Salmeier of Clovis, New Mexico, who had an ad on the same page offering a 1958 Karmann Ghia with 3000 miles for $2625.

“The Complete Book of Classic Volkswagens” covers “the evolution of the popular Beetle as well as other variations of Volkswagen’s air-cooled cars, vans and trucks.” The 288-page (9.75 x 12 in.) book has 300 color and 200 b/w photos. It’s published by Motorbooks (quartoknows.com) and has an MSRP of $50.