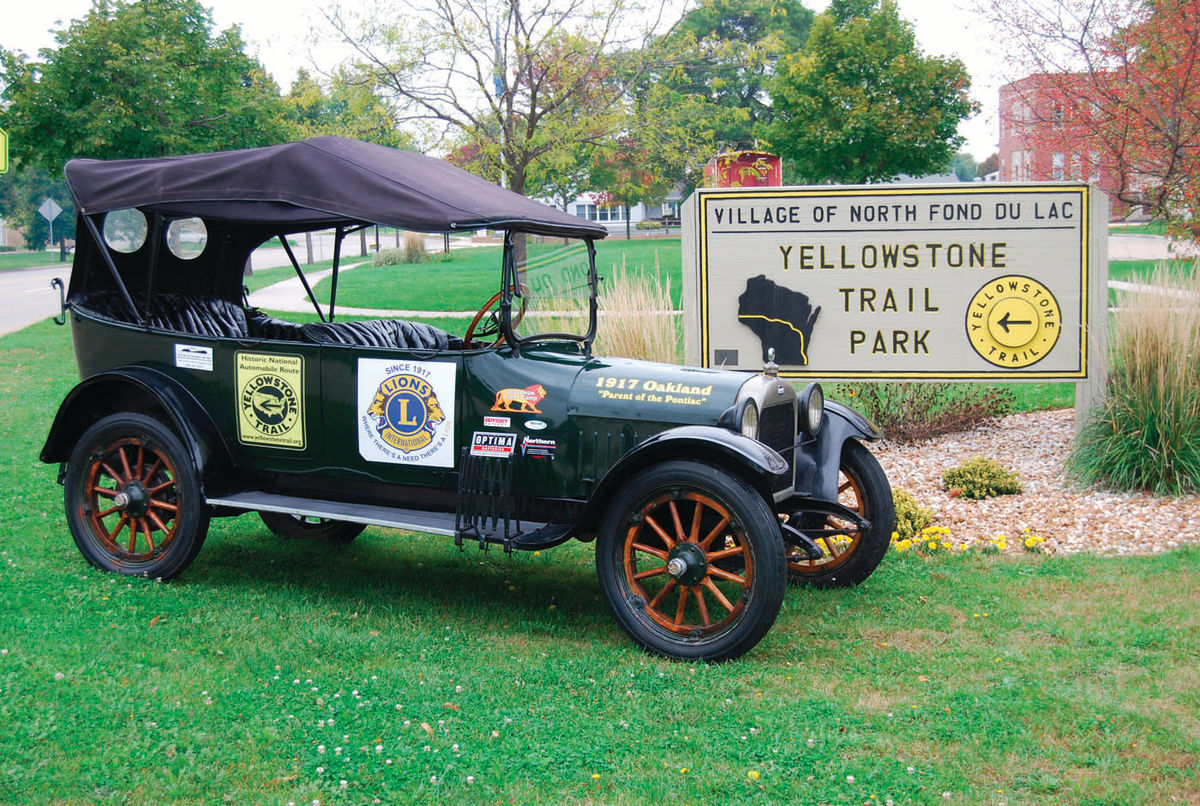 Their 400-Mile Tour in a 1917 Oakland Called for Some Special Traveling Tactics. The Heavy Rain Didn’t Help Things Either.

Editor’s note: When AR contributor John Gunnell acquired a 1917 Oakland, he and some car pals decided to drive the antique vehicle along Wisconsin’s 400-mile stretch of the Yellowstone Trail. The Trail, established in 1912, was the first transcontinental highway through the upper tier of states, running from Massachusetts through Yellowstone National Park in Wyoming to Seattle. They also decided to use the trip to raise money for the Lions Club because just like the Oakland, that group hit the century mark in 2017.

As we recounted in last month’s installment, during the first four days of the trip we were constantly working on the car. Now let’s take a look at the last two days of our trip…when the weather added to our touring problem.

Friday started at an Oshkosh hotel under cloudy skies. For the rest of the day we would cloud the air a little bit more with exhaust smoke from my Oakland. The day ended at the Super 8 in Hartford, Wisconsin, with a roll of duct tape, some borrowed plastic wrap and skies that had become quite rainy.

Shortly after leaving Oshkosh, we stopped at a gas station at the intersection of Highway 45 and County Road R. Hobbyist Kenn Oie had emailed that he’d meet us with his 1960 Thunderbird. Once we arrived, Dave Sarna, who’s been doing much of the mechanical work and driving, serviced the Oakland. It has no valve cover, so the valve train has to be oiled daily. He also added coolant to the almost-empty radiator, topped off the oil and tinkered with a few other things.

We started off again on County Road R, with Dave and the smoky Oakland leading the parade, Kenn following in the T-Bird and me driving the F150 Crew Cab chase truck and trailer. The Oakland was running fairly strong and we stayed on R until we came to RP, which took us into North Fond du Lac. Several of Wisconsin’s 400 Yellowstone Trail signs were spotted along this route.

We were early, but Lions Club members were already at the Yellowstone Park in North Fond du Lac. The small park has a large Yellowstone Trail sign that was great for photo ops, including one for us. A minute away from the sign was a warehouse for Northern Battery (www.northernbattery.com) which is located in another old Yellowstone Garage, a stopping place along the route in the Trail’s early days. In fact, the garage belonged to the family of Mark Mowbray, the executive director of the national Yellowstone Trail Assoc. Mark and his brother came to see us in North Fond du Lac. He also had told Kirk Donskey, the vice president of Northern Battery, about our plans to stop at the building. Kirk made a healthy donation to the Lions Club and also helped us out with a technical issue. Our two-year-old battery had gone dead several times, so Kirk told his Fond du Lac crew to put a new 6-volt Northern Battery in the Oakland.

After an hour or so, we were ready to have lunch, take off and smoke up the highway to Hartford, Wisconsin. Dave had been advised to put a little diesel fuel in the Oakland’s tank, so we went looking for a gas station with diesel fuel. But we didn’t make it to the KwikTrip station before the Oakland started acting up. The carburetor was flooding and stalling the car, but the problem also seemed to be electrical. At the Kwik-Trip, Dave took the distributor apart and cleaned the contact points with sandpaper. He then checked and adjusted the carburetor.

Keeping It On the Road

I suggested we might want to put the car on our trailer and tow it to our next stop at an automotive museum in Hartford, but Dave would have none of that. He insisted the car was going to make it under its own power and continued to adjust the carb the best he could. It wasn’t “good,” but it was good enough.

We skipped lunch and went smoking through downtown Fond du Lac, then took off for Hartford on Highway 176. Mark mentioned something about a hill we’d be climbing. He wasn’t kidding!

In the old days, Oakland automobiles were known as good hill climbers, but our “Sensible Six” huffed and puffed a little climbing those grades south of Fond du Lac. We were beginning to wonder if Dave was driving a car or “The Little Engine That Thought It Could.”

Sometimes, he’d come to a halt near the top of a hill and I expected to be loading the trailer. Then the Oakland would shake, puff out a little smoke and start moving uphill again.

As you might imagine, we had traffic backed up at various points. Dave was usually going about 20-25 mph. I was driving behind him with my 4-ways flashing. We left room between us for vehicles to pass me, get back in for safety and then pass the Oakland. Not all the motorists caught on right away, but fortunately we didn’t become the target of any road rage.

About 10 miles out of Hartford, Dave stopped for a breather and I told him I had checked the GPS for an easier way to get to the auto museum. So I went ahead to lead him in. All went fine until the last couple of turns. Dave got stuck in traffic coming up a hill and lost sight of me turning left. He continued straight. I did a U-turn when I could and went the way he had gone. It was easy to find him. All I had to do was follow the smoke!

The GPS soon got us to the Wisconsin Automotive Museum where members of three different Lions Clubs were waiting, along with Dawn Bondhus, the museum director. After some picturetaking, Dawn offered Dave and me a tour. The specialties there are Kissel Kars, Nashes and short track racing cars, but the overall collection included everything from a gorgeous Ruxton on special display to a 1913 locomotive. We had a pretty long chat with Dawn and though I’ve been to the museum many times, this was the best visit.

The rain had started just before we got to Hartford at 4 p.m. and continued all the time we were there. By the time we left it was coming down pretty steady. It was dark, but Dave wanted to drive the Oakland to the Super 8 where we had a reservation. Amazingly, he was able to make a relatively easy (he only cut off one car) left turn onto Highway 60, a busy 4-lane road. I wasn’t quite as lucky with the trailer and had to wait awhile. Dave would need to find the Super 8 on his own.

Dave missed the entrance on the first try but came back and parked the Oakland. It was raining pretty steady, so Dave decided to walk down the street to buy a tarp to cover the car. The Oakland has absolutely no rain protection other than the windshield and the top.

I soon found him sitting in the hotel lobby with scissors and a couple of sheets of shipping plastic that he had received from the backroom crew of a nearby Walgreens. We wrapped the plastic around the car and held it on with duct tape.

I came to realize that if Dave hadn’t been involved in this Yellowstone Trail Tour, it probably never would have been completed. Dave just doesn’t know the meaning of the word “quit.” Two weeks earlier he had realized a personal dream by driving a Trans Am 209 mph at Bonneville (2-way average over 206 mph). After that high-speed adventure, he drove the ’17 Oakland at 25 mph across 409 miles in Wisconsin. Somehow, some way, Dave achieves what he sets out to do.

We Finally Made It

Saturday was Day 7 of the Yellowstone Trail Tour and it found us dealing with rain all day. The rain was pretty light in Hartford in the morning, got worse in Hales Corners at noon and was pretty heavy in Kenosha late in the day. The 1917 Oakland got a little waterlogged, although its big “convertible top” did a pretty good job of keeping most of the interior dry.

We had starting problems in Hartford and decided to tow the car in the Milwaukee area. In Hales Corners, we stopped at a historic old tavern and the local Lions Club members turned out and gave us a nice donation. Bob Hanson of WPAK Radio in Waupaca caught up with us for the end of the tour. His cousin from Kenosha came along to guide us through the area.

After leaving Hales Corners, we headed the Oakland toward Kenosha. There we ended the tour at Gateway Classics, a giant collector-car dealership.

Towing It Home With the Top Down

We towed the car home on a windy and rainy Sunday after noting that the fabric top had torn at the upper rear corner on the passenger side. Even though it was raining steadily, we lowered the top to prevent it from tearing to pieces. There are special precautions one should take before towing an early prewar car (see a list of tips below) but we had to avoid taking the time to do them because it was raining so hard.

When we got the car back to my Yellowstone Garage in Waupaca, Dave removed the top and took it to the Appleton Awning Co. to get the tear repaired. He also took the Marvel carburetor off and brought it to Bob Buchman who will be restoring it.

Shortly after the Yellowstone Trail Tour, we heard that this endeavor had raised over $7000 for the Lions. We now plan to take the car to several upcoming events such as the NEW Motorama show in Green Bay on March 23-25, the Pontiac-Oakland Club International Convention in Wisconsin Dells June 24-26 and the Iola Car Show in Iola, Wisconsin, July 12-14.

Some Tips for Towing an Early Prewar Car

Towing or trailering an early prewar car calls for some special precautions:

1. It’s a good idea to tape or cover the headlight lenses.

2. Use padded tie-down straps to keep the hood on the car.

3. Lower the top if possible and strap it with tie downs or bungees.

4. If you must tow with the top up put the car on the trailer backward for added protection.

6. Remove everything from inside the car.

7. Tie opposite doors together with straps or bungees.

8. Wrap the windshield with plastic wrap.

9. If practical, wrap the car with plastic shrink wrap as used with boats.