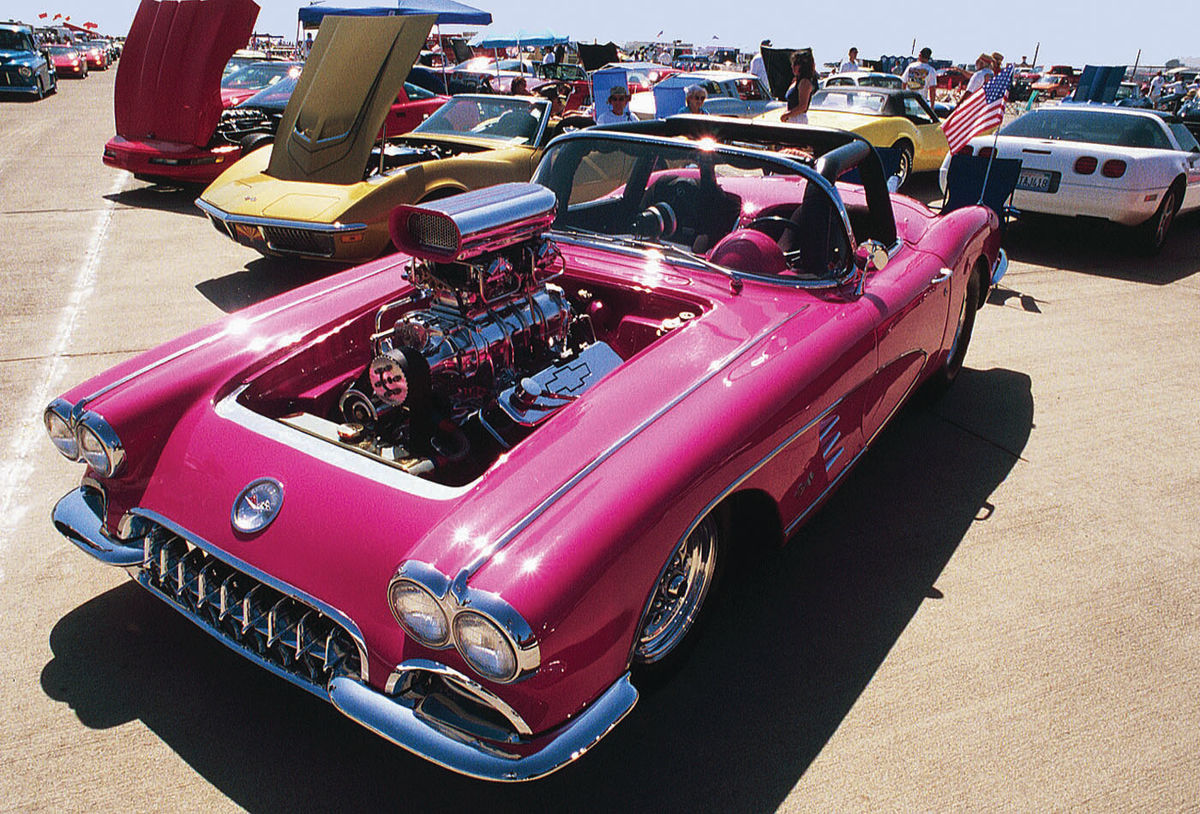 I am just starting out in the hobby, but I have inherited a nice 1968 Camaro from my uncle that has a V-8 with a fourbarrel and automatic transmission in it and I would like to make a street rod out of it. I am taking auto shop in high school so I know the basics. Would a blower be the best way to go? What are the advantages and disadvantages?

When a normally aspirated internal combustion engine is running, air enters each time a piston is pulled down inside its cylinder on the intake stroke because as the piston recedes, it enlarges the chamber, causing a vacuum. This vacuum is quickly filled by air rushing in and mixing with atomized fuel while passing through the carburetor. The raising piston in turn compresses the fuel and air mixture. Then, at the right moment the mixture is ignited, which super-heats the air, causing it to expand and push down on the piston. That hot air is then released through the exhaust system.

Atmospheric pressure is about 14 pounds per square inch at sea level, and that is what makes the cylinders fill with air. So it stands to reason then that if you increase the air pressure by forcing more air into the intake system, you will have a denser mixture, a bigger explosion in the cylinder, and more power as a result.

The major catch to supercharging for most street rodders is cost. Installing a supercharger or turbocharger can cost $3000 to $5000, and that is more than most of us spend on the entire engine. There are other drawbacks too, such as installation, plumbing and setting up the ignition. Also, blowers work best with fuel injection and that is another expense, and more to learn about setting up the system and tuning it.

And like everything else, there are limits to how much of an increase in pressure you can push into an engine. That’s because as you compress air, it gets hot. And as the air in a supercharger gets hotter it becomes less dense, and the power gains diminish. Also, if the air/fuel mixture coming into the engine becomes too lean or too hot, it may explode on its own.

Detonation occurs when the combustion pressure goes so high that the inlet charge explodes before the spark plug arcs. When this happens combustion takes place while the piston is still moving up in the cylinder, and that causes a tremendous shock to the pistons, rods, and crankshaft.

The flame travel across a cylinder under normal circumstances is between 120 and 200 miles an hour. But when fuel detonates—that is, explodes under pressure before the sparkplug even fires—the flame speed goes up as high as 2000 miles an hour, and the resulting shock destroys your pistons. A richer mixture (one with more fuel in suspension) or one that is less compressed is cooler so it is less likely to detonate. Also, there are devices called intercoolers that cool the compressed air before it goes into the engine and they help prevent detonation too.

But even when you can get a cool, dense mixture into an engine under high pressure, you need to take into account whether you engine’s bottom end can handle the extra power. Even though theoretically the more air and fuel you can run through your engine the more power it will make, there are practical considerations. Four to seven pounds increase in boost is tops for the street.

Most engine builders are familiar with the Roots-type blower. Those big, polished blowers you see sitting atop dragster engines are generally the GMC type 6-71. The basic design actually goes back to the late 19th century. Inside that big housing on top of the engine are two sort of figure-eight-shaped metal vanes that rotate in close tolerance with one another to pump air.

And since the device can pump air much faster than an engine can consume it, the air in the intake manifold becomes compressed. The blowers you see most commonly at the drag strip were originally developed by GMC for big, two-cycle diesel truck engines. Hot rodders were quick to see their advantages and adapted them to their engines years ago. These old-style crankshaft driven blowers can give you more boost than you’ll ever need, look impressive as hell, and make a lot of exciting noise, but they are not the best choice for street use.

Big blowers require a fair amount of power just to turn them over, and they don’t fit under the hoods of most street vehicles. They also give poor mileage if you run them with carburetors instead of fuel injection because the fuel/air mixture must be kept rich to avoid detonation. You can mitigate this by driving conservatively, but then, why would you want a blower in that case?

My favorite Roots-type blower for the street is the Weiand Pro-Street 142 offered by Holley Weiand. They are small and fit nicely under most hoods. They also work well with Holley carbs, or injection that is set up for them. And Holley can help you custom order a supercharger for your particular application. These blowers are well-made, durable and produce awesome low-end torque as well as high-end horsepower.

And then there are turbochargers which use the pressure of the escaping exhaust in an engine to spin a turbine that drives an impeller to force air into the intake manifold. Truly impressive horsepower gains can be had with turbochargers, but they too have drawbacks…the major one being throttle lag. When you first jump on the throttle, nothing much happens. And then the turbocharger spools up and you get a sudden surge of power.

Another interesting thing happens when you let off the gas in a turboequipped car…the turbocharger keeps on pumping for a while longer as the exhaust gas escapes, which is what causes that pop and the shot of flame when the driver rolls out of the throttle on a turbocharged race car. This isn’t a problem if kept under control, but it can be disconcerting.

Turbochargers don’t provide boost at low rpm, and their bearings and turbines can suffer from the extreme heat generated by the exhaust system if not properly cooled. They also require more extensive plumbing than other superchargers. On the other hand, if used with an intercooler and with the oil in them properly cooled, they are incredible.

Garrett is my choice for turbochargers. They are the turbo of choice in venues where supercharging is allowed. Many major manufacturers have installed Garrett turbochargers on their offerings in the last 20 years and they have proven themselves to be very reliable.

Turbos are really great for higher altitudes too. If you were building a street rod in the Colorado Rockies, you might well consider adding one. Many diesel truck manufacturers run Garrett turbochargers and have found them reliable and indispensable in the mountains.

Centrifugal superchargers have been around for a long time too, and they have become popular again with manufacturers such as Buick, Pontiac and Ford. The advantages to them are that they give you boost at lower rpm and back off when you do, so there is no throttle lag. They also are easy to install and they fit under the hoods of most vehicles.

Eaton makes bolt-on units for new cars, and when combined with modern fuel injection and ignition management systems they are impressive. They also are quiet, reliable, and street legal in all 50 states. Problem is, Eaton doesn’t provide kits for the street rod builder, so a lot of fabrication would be required if you wanted to adapt one to an older engine.

However, for street use, ample power can be generated from your engine without going to the expense of a supercharger. Many wellengineered after-market components are available for less money that will wake up your engine. So unless you have the requisite expertise and money, superchargers aren’t worth the trouble. They are marvelous devices that make awesome power, but if you don’t know what you are doing, they can make awesome trouble too.