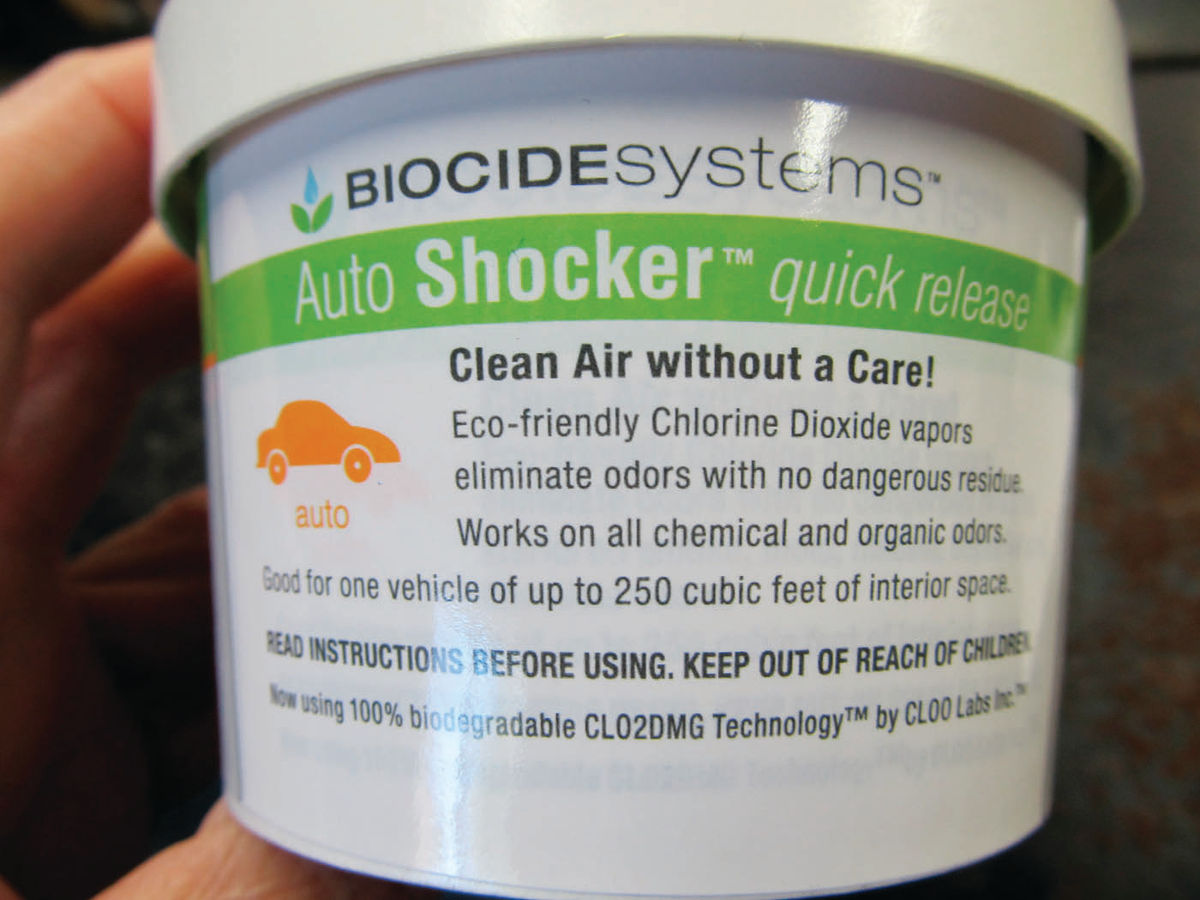 No doubt you’ve encountered offensive interior odors in any number of vintage vehicles and even in some newer ones.

I’ve had several vehicles with that problem and looked for an odor removal technique that involved more than just hanging a scented cardboard pine tree from my mirror or hosing down the interior with a fresh-smelling spray. Those two approaches, in my mind, just attempt to cover up odors and convince you that everything is OK.

I’d heard about using an ozone generator like those brought in to remove smoke odors in buildings, but was looking for something that wouldn’t cost too much, plus I was uncertain as to the extent of oxidation that might occur with ozone.

Then a bit of Internet research pointed me to a product called “Auto Shocker” from Biocide Systems in Los Angeles.

Chlorine Dioxide Is the Main Ingredient

I first used this product on a 1932 barn find Chevy that had a combination of typical old-car mustiness and an offensive muddy road smell.

This car, when it was acquired in 2012 and placed in my barn, literally stunk up the place. I power washed the undercarriage in an attempt to remove caked-on mud that I imagined was the source of the odor. The hosedown only reduced the odor.

I then discovered “Auto Shocker” and used the product following the directions that include opening the foil packet and removing the paper bag containing yellow pellets, shaking the bag and placing it in the cup, and then adding warm water using the plastic measuring cup supplied with the product. I then placed a large paper cup with the Auto Shocker in the car overnight, indoors, away from the sun per the instructions.

The next morning there was no odor, just a bit of a fresh smell to the interior. The odors have not returned after the treatment three years ago and since then I’ve treated three other cars.

Our Cat Provided a Difficult Challenge

The second car, a 1988 Buick LeSabre with hints of a musty home smell, was housed in my workshop which was heated to about 50 degrees Fahrenheit during the wintertime. The end result was good…the interior had the smell of fresh laundry.

Then came the third challenge—and this one was major. There was male cat urine in my wife’s 2010 Dodge Caliber. A citrus cleaner, vinegar and water, water and Castrol Super Clean and more water did not remove the odor from a seat cushion.

Since the Auto Shocker instructions say that the material is not effective below 50F, and my garage was about 45F or less at the time, adding an electric in-car heater to elevate the temperature was in order. Well, a writeup in Wikipedia states that the CLO2 used for odor remediation starts to become thermally unstable at elevated temperatures. The Auto Shocker package says the car is to stay out of the sun where the interior could get really warm, so things should be OK, right?

Well, to some degree. The end result of a 12-hour exposure with the interior warmed to over 100F was that there was a distinct strong Chlorine odor to the interior of the car that lasted several weeks before dissipating. However, there was no kitty odor.

Car number four is a 1990 Olds that had a trace of kitty odor mixed with people odor and a bit of greasy clothes mixed in. That exercise was executed at about 55F in the workshop and proved successful after about an 8-to-10-hour exposure.

I’ve since ordered more Auto Shocker to have on hand…rather than replace the cat.

(Editor’s note: Biocide Systems says that among the odors its product will eliminate are those caused by cigarettes, spoiled food, pet urine, skunks, trash, mold, mildew, gasoline, paint, fish, sweat and flooding. The product will work on hard and soft surfaces and, depending on the severity of the situation, will eliminate odors in four to 24 hours.)