You should restore your moldings

I’m looking for belt moldings for the outside rear of my 1995 Olds Cutlass Supreme convertible. These parts are not carried at the dealer. I’ve called numerous places with no luck. Is there a place where I could order them or is there some place where I could have new ones made?

As you’ve already discovered, GM no longer sells the trim parts you seek and nobody offers reproductions.

A skilled fabricator could replicate the moldings but the cost would almost certainly be frightening.

You don’t say whether you have damaged/deteriorated examples of the moldings you’re seeking but if you do, another option is to restore what you have. As you know, the moldings originally were painted body color so it shouldn’t be too difficult to fix any damage and then repaint the moldings.

If your moldings are missing altogether you can, of course, seek good used examples. Internet auction sites like eBay are often a fruitful source for used parts.

And, as always, it’s a good idea to network with other Oldsmobile enthusiasts by joining an Olds club. The Oldsmobile Club of America has a local chapter in Brandon. 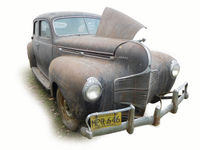