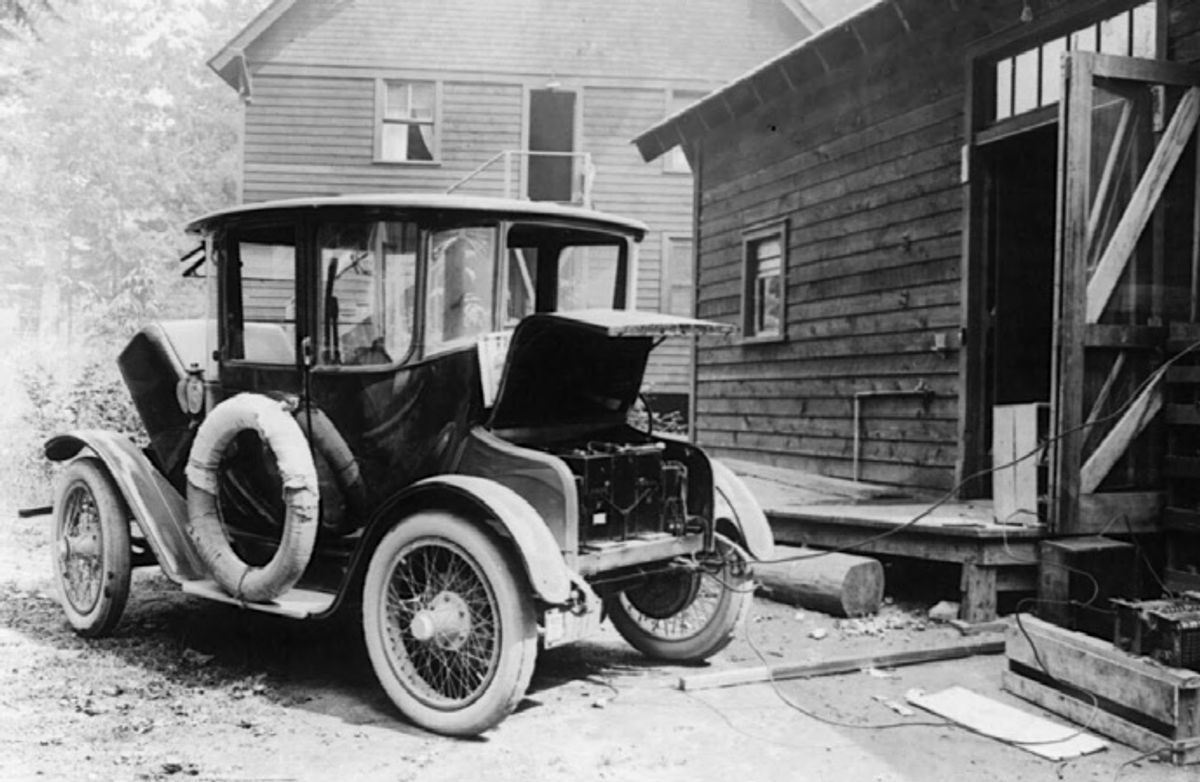 A Little Over a Century Ago, They Ruled the Roads…

STOP ME IF you’ve heard any of these electric car stories before: A leading statesman is among the first to ride in a new electric vehicle. A major domestic automaker works on the development of an electric car that will use an onboard gasoline engine to provide additional electric power. Plans are discussed to install charging stations in parking areas to facilitate use of electric cars. The media touts new technology as perhaps leading to the revival of the long-dormant electric car market segment.

Sure, you’re familiar with all of these stories,right?After all, President Obama drove a Chevrolet Volt for about 10 feet or so when he visited the car’s assembly plant. The Volt, of course, is known as an extended range vehicle because it has a gasoline engine to provide electric power when the batteries are depleted. And whenever the discussion turns to the idea of electric cars being used as commuters, one topic certain to be discussed is the need for public charging stations; where they’ll be placed, who will maintain them and how much will it cost to use one. As for the media coverage, it’s hard to avoid the rush of articles about the rebirth of electric cars. In fact, the L.A. Auto Show folks announced that the “Modern Electric Car Era” began at their November event. As if to add credence to the show’s claim, Motor Trend, Automobile and The Green Car Journal all chose that venue to announce that they’d named the Volt their “car of the year.”

Wait, It Seems That I Heard Those Stories Some Time Ago…

Now we come to the part where we spring the trap.

The statesman we were referring to in the first paragraph wasn’t President Obama. It was the then Prince of Wales, later King Edward VII, who became the first fare in London’s First electric taxi…in 1897.

The domestic automaker we were talking about was American Motors, which teamed with the Sonotone Corp. to work on the development of an electric vehicle with nickel-cadmium batteries kept at full charge by a small gasoline engine running a generator. Critics of the proposed car, which never was marketed by AMC, said it was a clever design, but it canceled one of the electric’s virtues—a lack of gasoline fumes and exhaust gases.

As for the media coverage, we were referring to a lengthy article titled “Are Electric Cars Coming Back?” It carried the subtitle, “New developments, taking advantage of the old-fashioned electric’s renowned reliability and economical operation, may bring about a revival of an automotive museum piece.” That article ran in The Saturday Evening Post…on March 12, 1960.

Among the ideas discussed in the article were: Why not put electric chargers on parking meters, “an extra dime giving a parked car 10 miles of recharge while it waits.” Or how about setting up gasoline car rental stations at the city limits of a major metropolis so folks who live in the city and own a short-range electric can change cars for long trips. Still another idea broached in the article was the possibility of stringing overhead trolley wires along freeways to power electrics which would then switch to their batteries when they hit the off ramp. How they would quickly hook and unhook from the trolley wires wasn’t explained.

The Brief History of Electric Dominance

The fact that we were able to dig up this gathering of electric car references from decades past comes as no surprise, given that electrics once were the powerhouse of the domestic automotive market.In fact, in 1899 and 1900 electric cars outsold gasoline and steam cars in the U.S. and continued to have a following for several years after that.

The electric car’s popularity of 110 years ago is easily understood when you consider the advantages many people would see in that type of vehicle.

After all, electric cars emitted none of the smells, noise and vibration associated with the early gas cars, there was no gear shifting, which tended to be something of a task with the transmissions of the day, and you didn’t have to crank start the electrics, which could be a daunting proposition, especially for women drivers. Granted,steam cars can be quiet and don’t require gear shifting or crank starting, but they do call for a lengthy, involved ritual to get them going, particularly on a cold day.

Furthermore, while the early electrics had a short driving range between charges, the steam cars needed to make numerous pit stops to refill their water tanks. And while the electrics were more limited in their driving range than the gasoline cars, there were few good roads a century ago and those were short and in town, meaning the electrics didn’t need to go very far anyway.

But it wasn’t long before roads were improved and extended, Charles Kettering brought out the electric starter in 1912, which meant you didn’t have to crank start a car anymore, and Henry Ford’s mass-produced Model T made the gas car much more accessible to many more people than the electric competition, which, generally speaking, cost about three times as much as a T.

Given those changes in the marketplace, it wasn’t long before the internal combustion cars took a strong upper hand over the electrics. Various electric vehicle companies went out of business in the ’teens, and while Detroit Electric, the most successful of the early electric vehicle manufacturers, kept on producing vehicles through the 1920s, mainly for wealthy women who wanted a quiet, easy-to-drive town commuter, it ceased production in the mid-’30s.

So, Are Electrics Really Making a Market Comeback?

Those who were around during the short-lived diesel engine boom of three decades ago might be excused if they consider all they’ve been hearing lately about the return of the electric car and take something of a wait-and-see attitude toward the viability of electric in today’s domestic marketplace.

After all, in the late ’70s and early ’80s the fuel-efficient diesel was touted as the next big thing for American roadways. Automotive execs from various companies announced plans for additional diesel engines and diesel-powered models,saying that by the mid-1990s a quarter of the cars sold in the U.S. would have a clattering diesel under the hood. Then gasoline prices slipped and the diesel market tanked.

Granted, there are numerous electrics headed for the market as we speak, so the automakers are doing more than just talking about a return of electric cars. In addition to the aforementioned Chevy Volt, which many actually classify as a hybrid since it does carry a gasoline engine, the all-electric Nissan Leaf is ready for market launch; Mitsubishi Says it’ll have an electric vehicle available later in 2011 and Ford is waffling, saying it will have an electric Focus late in 2011, but most of the production won’t come until 2012.Meanwhile,Toyotasaysitwill have an electric RAV4 in 2012 and Honda has announced that the Fit EV (electric vehicle) will arrive that same year. Furthermore, Renault Nissan CEO Carlos Ghosn has said that his two companies will each have four electric vehicle models by 2013 and their combined annual production of electrics will reach 500,000 by the end of that year. Ghosn has said that he expects electrics to account for 10 percent of global vehicle sales by 2020, although he also admits that government subsidies will be necessary for the first few years to make the electrics more attractive to consumers.

Interestingly, however, the forecasting firm J.D. Power & Associates takes a much dimmer view of electrics in the marketplace, saying that it expects the combination of electrics and hybrids to take only 7.3 percent of global sales a decade from now.

“Many consumers say they are concerned about the environment, but when they find out how much a green vehicle is going to cost, their altruistic inclination declines considerably,” said John Humphrey, senior vice president of automotive operations for J.D. Power.

And in addition to the initial price considerations, potential electric vehicle buyers also will have to mull over factors such as the installation of 240- volt service in their garage to greatly decrease at-home recharging times, the lack of a public infrastructure for on the-go recharging, and the range constraints on their electric car of choice.

So, while we’re waiting for this latest chapter in automotive history to play out (GM, for example, says it can only build 10,000 Volts In 2011, and it “won’t get a real sense of demand until 2013 or 2014”), we’d like to hear from some hobbyists who own and drive electrics that were built in the early 20th century.

And one question we’ll be eager to ask them is: Do you intend to buy one of the up-and-coming electrics to park next to your century-old machine?