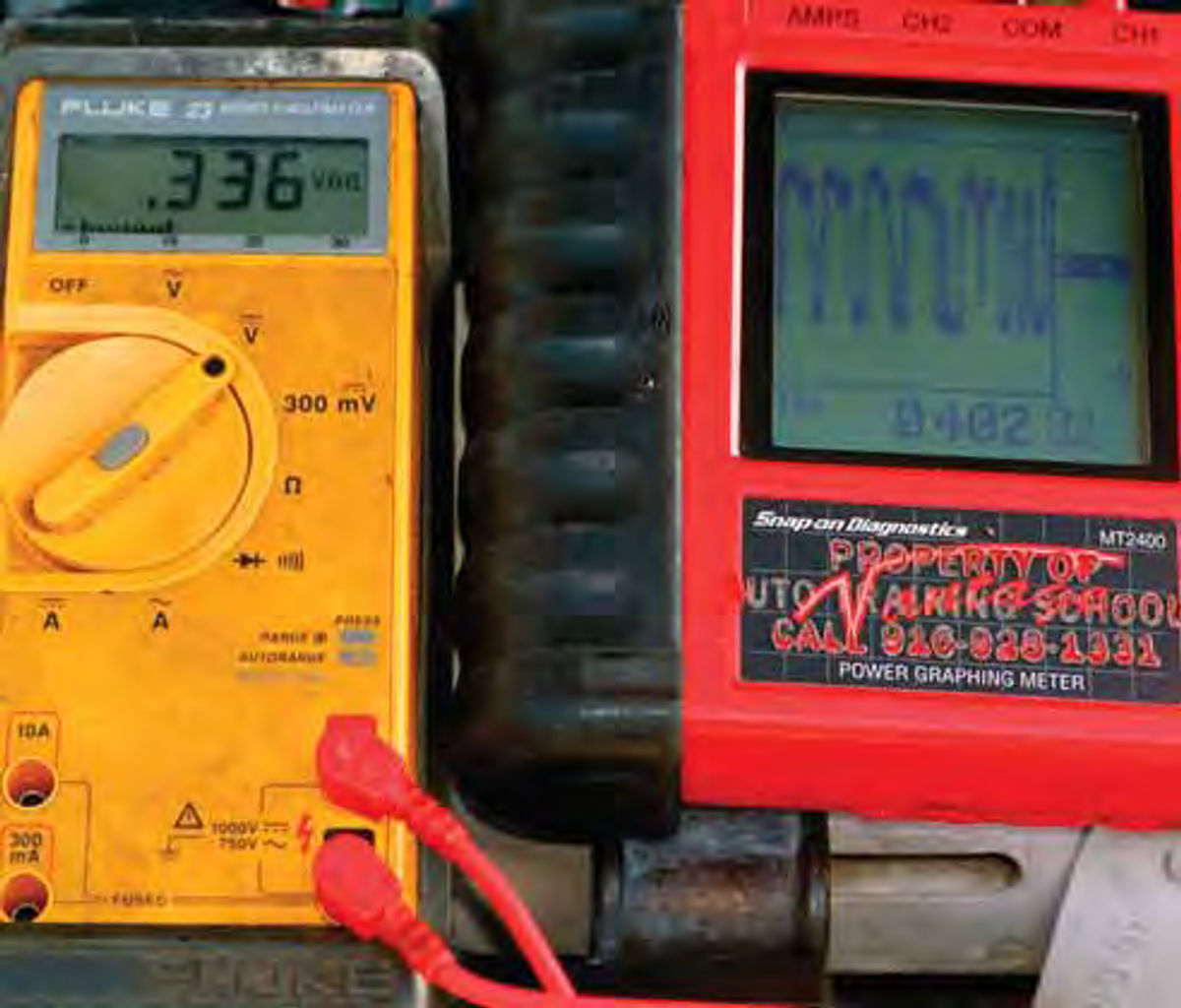 An Oxygen sensor Is Now the Chief Suspect In Our Search. So, We’ll Check Its Operation In This Installment.

EDITOR’S NOTE: WE’RE still searching for the reason or reasons why the “Check Engine” light has been coming on sporadically on our Mercury project car.

In the first installment in this four part series we looked at some tune-up problems that can cause the light to glow and in the second installment we hooked up a scanning tool to check on sensor inputs and controller outputs.

This time, we’ll cover oxygen sensor wave forms and use a graphing anaLYZER or lab scope to verify if we have a “dead” or “LAZY” oxygen sensor.

When using a graphing analyzer or lab scope, and for the purpose of this series, several terms need to be defined and normal data ranges will be discussed. Now, about those definitions:

• Volt: A unit of electrical measurement.

Voltage may be expressed in whole numbers like 12 volts on a battery, displayed in tenths like 12.6 volts, or displayed in hundredths like 12.63 volts. The more displayed digits, the more accurate the voltage reading.

On computer-controlled vehicles, many times voltages of less than 1 volt are measured. This can be expressed accurately enough in tenths of a volt like 0.2 to 0.8 volts(which is the range of an oxygen sensor).

With voltages of less than 0.1 volts, like a computer circuit ground voltage, it is easier to read the voltage in millivolts (MV). 100 MV is 0.1 volt (volt divided by 1000 = millivolts).

For example, if we want to accurately measure a computer ground circuit voltage, we would select a millivolt scale and read 76 mv which is 0.076 volt.

•Cycle: When measuring oxygen sensor voltages, we must also measure how many cycles are displayed each second.

The number of cycles in a second depends on the vehicle’s “computer strategy,” a subject which we will cover in a later article.

An oxygen sensor cycle is from midway on a voltage graph beginning at 0.5 volts, increasing up to 0.8 volts, decreasing down past 0.5 volts and on down to 0.2 volts and back up to 0.5 volts. (See Figure 1.)

The graphing will not tell you what’s causing an anomaly. You must still figure out the anomaly “cause(s)” and the “effect(s)” one item at a time.

As outlined in Part 1 of this series, I urge you to perform all tune-up and maintenance first before you start changing sensors, actuators or computers.

In addition, use of a digital volt-ohmeter (VOM) equipped with a bar graph (Fluke model 77) will be discussed.

With these instruments, I can test why the “check engine” light comes on.

I “back probed” the bank 1 O2 sensor (back bank, transverse engine in our ’95 3.8L Mercury). You can back probe the O2 connector using a heavy duty “T” head pin.

On our ’95 Mercury the black wire on the sensor side of the connector is the signal wire to the computer.

Note: For more on back probing and measuring oxygen sensor voltage, you can review my book, “Tuning Up Autos and Trucks,” listed under “Resource” at the end of this article.

When switching from 0.2-0.8 at low cruise, the computer system was in “closed loop.” (There will be more about closed loop operation in Part 4 of this series.)

Upon entering the freeway, the O2 sensor was switching for around 1/2-mile. Then, the voltage dropped to 0.2 and stayed at 0.2 cruising at 60 mph. There was no oxygen sensor switching!

The “check engine” light came on after the oxygen sensor voltage stopped switching. That was within 1 mile after entering the freeway on our test drive.

I monitored the waveform using a Snap-On Vantage Graphing Analyzer. The waveform showed a “misfire.” The misfire was not continuous. It was only an occasional misfire.

At this point I am not sure of the cause. As you read in Part 1 on tune-ups, the plugs were sparking normally.

Also at that time, my analysis was the Bank 1 oxygen sensor was very “lazy.” It took a long time to start switching plus it “died” on the freeway.

I tested the Bank 2 (front bank) oxygen sensor. The graphing analyzer showed instant response to switching from 0.2-0.8 volt with a warmed-up engine and a steady wave form. There were no glitches like we experienced on the Bank 1 (back) oxygen sensor.

As you’ll recall in Part 1 (November), I decided to perform a fuel injector (FI) cleaning directly into the fuel rail just to see if the Bank 1 oxygen sensor would be able to revive itself.

After the FI cleaning, the front bank (Bank 2) oxygen sensor continued to operate normally with good switching and no glitches.

The wave form showed lots of “hash” with an average voltage of around 0.2 and the check engine light stayed on. There was no switching.

And sometimes, the lazy O2 sensor “wakes up” after the direct fuel rail injector cleaning.

But in this instance, none of that happened. As noted above, in this case the Bank 1 sensor died.

It was time to bite the bullet on this project, so I installed a new oxygen sensor in Bank 1.

The new sensor works fine. The “check engine” light isn’t coming on and no more computer trouble codes popping up!

“Tuning Up Autos and Trucks” by Milt Webb

If You See the Check Engine Light

Help me identify these crankshafts

Prepping your chrome for plating