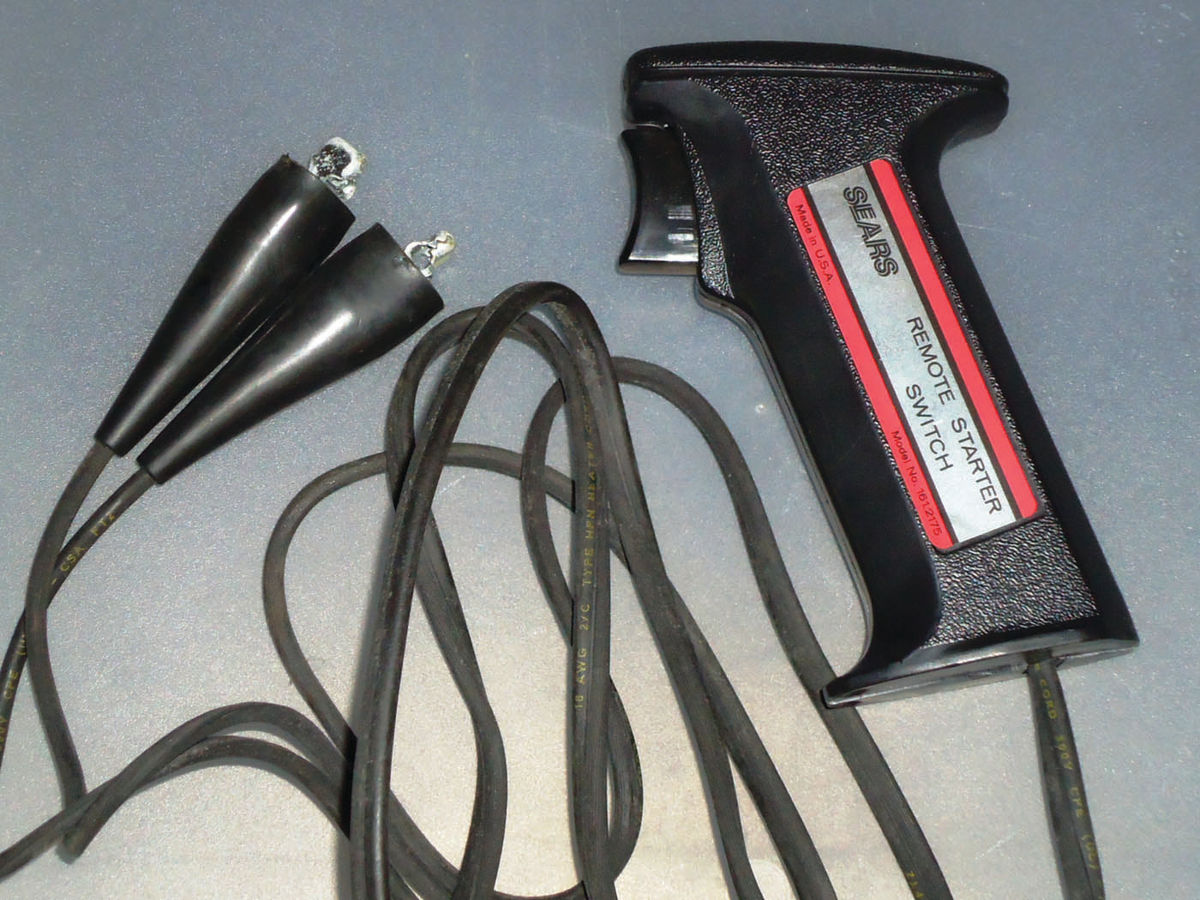 Having this simple tool can eliminate the need for an assistant in many situations or at the very least eliminate your running back and forth to the driver’s seat when performing certain tasks. It would be useful when doing a compression or cylinder leak down test to name a few.

Photo 1 is of a Sears remote starter switch (I believe it was made by Actron). This probably is 10 years old, and was made in the US. In Photo 2 you see an old Snap-on. This type uses a button instead of a trigger like the Sears tool and is a better choice when you are trying to bump the engine in the smallest increments, for example when aligning the timing mark. Connecting the switch is easier on some vehicles than others. On my GM vehicles one lead of the remote starter is connected to the battery terminal of the solenoid, and the other to the “S” terminal (usually located to the inside; closest to the engine block; most challenging to reach). Some vehicles, like older Fords where the solenoid was located high on the fender well are very quick and easy to connect. Check your vehicle’s manual to verify proper hook-up, and should there be any additional special instructions. Amazon has several to offer, including one by Actron #CP7853 for $15.99 which is identical to the Sears tool pictured, but is now made in China. Today’s Snap-on naturally looks different than the one in Photo 2. Item #MT302BY is still a button design, made in the US and priced at $76.99. A couple of others listed on Amazon are, OTC #3650 for $40.22. One review mentioned it’s listed as made in the US of global components. Whenever I read that, the first thing that comes to mind is deception, so be aware. Performance tool #W80586 lists for $16.60, and while no country of origin was indicated, one review said it was “Chinese/Korean made.” Possibly it is a product of Korea. Tooltopia has a Gearwrench #KD124 for $11.97. There are many more out there to choose from online.

Without a doubt, this is the most underutilized tool, and I am the worst offender. Considering the minimal cost, it can be a great addition to your tool collection.

As with any tool, the more you use it, the more familiar you become with it, and more useful it becomes. Photo 3 shows a Sears vacuum gauge. It came with some adapters, although a couple may have been located after the fact. It can be used to check engine vacuum or mechanical fuel pump pressure. The scale reads positive pressure typically referenced in PSI to the right of zero, and vacuum in inches of mercury to the left of zero.

On pre-emission vehicles a vacuum gauge can be used to adjust your carburetor’s idle bleed screws by obtaining the highest vacuum reading. It can also be used to adjust ignition timing. To see just how accurate adjusting the ignition timing would be using only a vacuum gauge, I used my 1966 Malibu with its 194 CID engine as a test subject. This was done simply out of curiosity. With the engine fully warmed up, the distributor vacuum advance disconnected and vacuum source plugged, the distributor was rotated back and forth until the highest vacuum reading was obtained. I repeated this procedure a couple of times until I felt certain it was correct, and then secured the distributor. Next the timing light was connected and ignition timing was checked in the conventional manner. It was within 1° of the desired setting, pretty impressive. This is something to keep in mind should you ever encounter an older vehicle where its harmonic balancer’s outer ring has shifted, thus the timing mark is out of place. The harmonic balancer should be replaced, but this could get you by in a pinch.

Checking a vehicle for an exhaust restriction is another handy task for the gauge. Back in the early 1970s some GM vehicles came equipped with double wall exhaust pipes. Frequently these vehicles would come in for service complaining of diminished performance. What was happening was the inside pipe would start to collapse, causing a restriction, but there were no outward signs. On severe conditions you could actually hear the exhaust system on these vehicles making a jet-like sound as they struggled to drive down the road.

A few years later the catalytic converter was introduced. It didn’t take long before people tried to run leaded fuel through them which created another possible restriction to consider.

Additionally, a vacuum gauge is useful to identify vacuum leaks, leaking and sticking valves, weak valve springs and more. Many gauges include information with regard to the different gauge readings and what they mean, but if not check your manual or do an online search. There is plenty of information out there.

While the above-mentioned vacuum gauges are fine for checking the fuel pump pressure on mechanical pumps like those found on my 1966 Malibu and 1986 Caprice (vehicles with carburetors), the Throttle body Injection (TBI) on my El Camino requires a different gauge and set-up, and port fuel injection still another.

For gas-powered vehicles that have a Schrader valve connection on the fuel rail, Actron offers a #CP7818 Kit. Here it is in Photo 4. The gauge reads from 0–100 psi in 2-pound increments, and it has a fuel bleed off line to release the fuel pressure before disconnecting the gauge. It includes an adapter for the smaller Schrader valve. They state on the old packaging that came with it that it fits most GM 1984–1996; and most Ford 1983–1996. Check with the manufacturer to make certain it will fit your vehicle. Today they are made in China. It’s available from Amazon for $33.29; www.toolsource.com is offering it for $26.95; and www.tooltopia.com has it for $32.69.

Actron also offers what they call a “professional fuel pressure tester kit” #CP7838. It appears to have several extra adapters, is made in China and priced at $41.99 through Amazon. Tooltopia has an OTC product; #OTC4480 which includes the adapter for GM TBI, and other extras for $84.98. They also have at least four other testers to offer. Snap-on naturally has several offerings covering anything you can imagine regardless of the vehicle. If you are servicing a variety of late-model vehicles and are willing to pay the price, Snap-on, Mac or one of the other professional tool suppliers might be the best choice.

Actron #CP7817 has a lower pressure gauge, from 0–60 psi, and is calibrated in 1-pound increments. Take a look at Photo 5. It looks almost identical to their #CP7818 shown in Photo 4, but includes a special adapter for TBI. Photo 6 is a close view of the adapter. The threads on the left of the adapter fit into the fuel filter and the fitting on the right is connected to the fuel line. Pointing downward is the Schrader valve connection for the gauge. On my 1987 El Camino there is only minimal free movement at the fuel filter; enough to allow the fuel filter to be removed and replaced, but not enough to accommodate the addition of the 2" long adapter. Only after removing all the fuel line retaining clamps from the frame rail was enough movement obtained to allow installing the adapter. This was a frustrating task to say the least. At the time all I could think of was that someone at GM should have lost their job for not having a Schrader valve somewhere accessible on the fuel line. Attempting a possible installation of the adapter closer to the throttle body proved to be impossible. Once the adapter was installed, it worked fine. Amazon also has this tester available for $24.97. Although available for sale, it appears that it may be out of production. The one I own was made in the US. As an option, just purchasing the TBI adapter shown in Photo 6 is possible. It’s available from Summit Racing for $11.97. It could then be used with any tester that has the Schrader valve connection on the adapter hose, although the lower pressure gauge is more suited for this lower pressure application.

Tool Aid adapter #37650 is made to take the place of the fuel filter, instead of fitting in with it like the one made by Actron. At least on the surface this certainly sounds like a better idea. Reviews on Amazon have several complaining that it leaked while others had no problem. Made in China, Tooltopia has a better price at $22. NAPA online also shows an adapter that will take the place of the filter, #BK 7002460 for $56.99. They list it as out of stock, and to call your local store for availability. This is likely a discontinued item, but you may be able to locate one.