My question is about tires. I have owned a 1950 Hudson Commodore Six since 1971. I completed a “frame off” (or at least as close as one can come to frame off with a Step Down Hudson) in 1992. At that time I purchased five new “correct” tires and tubes from Coker. The car has less than 2500 miles on it since the restoration and has always been stored in a windowless garage. The tires do not show visible signs of deterioration and air loss is minimal (a pound or two in six months). However, are the tires suspect because of their age?

I also own a 1991 Jeep Grand Wagoner, which we purchased new. I put new Cooper tires on it in 2002 and there is less than 2500 miles on them. This car, too, has always been garaged; the tires hold air and show no visible signs of deterioration. Again, are these tires suspect on the basis of age? I am sure I’m not the only hobbyist out here with older low-mileage tires. Thank you for your thoughts on this matter.

This is a good question and one that we get with some regularity, which is not surprising given that many collectible vehicles are driven sparingly and sometimes stored for extended periods of time.

While it is certain that every tire has a finite lifespan, it’s extremely difficult to predict what that is for any given tire. The task of determining how old is too old is made all the more difficult because so many variables, including exposure to the sun, chemicals and atmospheric pollutants, frequency of use, vehicle mass and wheel alignment, and inflation pressures, will all impact a tire’s lifespan. And the effects of aging can be quite different depending on how the tires are used and

how they’re treated. In general, older tires have less resistance to over-deflection (overloading or under inflation) and a disproportionately diminished resistance to failure at or near their speed rating. Or put more simply, all else being equal the detrimental effects of aging are not as pronounced for tires that are properly inflated, carrying a relatively light load, and driven at relatively modest speeds.

At the present time the U.S. National Highway Traffic Safety Administration (NHTSA) does not have a standard for when tires should be replaced as a result of age but it is conducting ongoing studies that include the effects of aging and that may eventually lead to a standard.

Does this mean you’re courting disaster if your tires are over 10 years old? If the tires were protected from sunlight, ozone, other harmful chemicals, excessively hot and cold temperatures, and are correctly inflated, carrying a relatively modest load, and not driven fast or hard, you’re probably not in imminent danger if your tires are a little older than 10 years.

So, if I were in your shoes I wouldn’t be all that worried about the tires on the Jeep, but I do suggest making sure they are correctly inflated at all times and visually inspecting both sidewalls and the treads very regularly.

I would, however, replace the tires on your Hudson. Without determining exactly when they were made you can’t say precisely how old they are, but you do know that they are at least 19 years old because that’s how long ago you installed them. I know it hurts to spend the money to replace tires that have travelled only 2500 miles and that still look as though they have lots of life in them but for peace of mind you should bite the bullet and buy new tires. 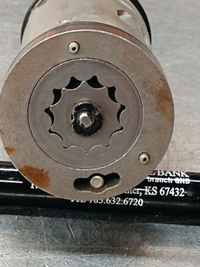