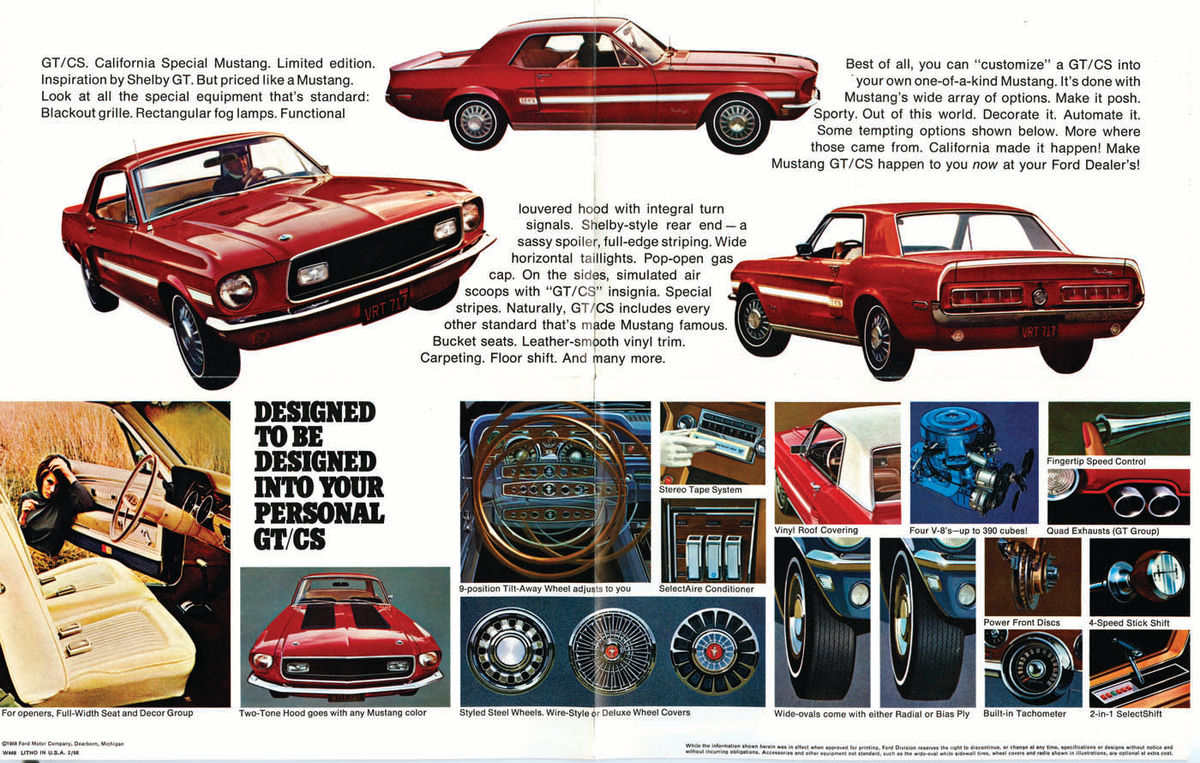 The Re-Introduction of Two Classic Mustangs

A Half-Century Ago, Two Special Ford Pony Cars Drew a Lot of Attention. Now They’re Back With a Blend of Vintage Styling Cues and Some Very Modern Equipment.

Did you find yourself drawn to a Mustang California Special when the West Coast-themed ponies first came out 50 years ago…but your afterschool job just didn’t provide that kind of payment money...

Or maybe you wanted a highperformance dark green Mustang after you saw Steve McQueen rumbling around the streets of San Francisco in the cop movie “Bullitt.” That 1968 flick featured one of the all-time best car chases with detective McQueen in the green Mustang and two menacing hit men in a black Dodge Charger. When you left the theater you just knew that you should be behind the wheel of a car like McQueen’s…only your cash was being spent on college tuition at the time instead of being available for a muscular, menacing Mustang.

Well, if you still have the urge for a California Special or a specially optioned Bullitt, you could search for a vintage version of either as Ford has put out limited editions of the two cars from time to time over the years.

Or you could wander over to your Ford dealership sometime this summer as the Blue Oval will once again be blending the past with the present as it comes out with 2019 versions of these two seminal cars.

Still California Dreamin’ After All These Years…

The lure of cruising along the Pacific Coast Highway on a warm, sunny afternoon and stopping off at a beach or two during the pleasant journey no doubt grabbed the attention of many of us the first time we heard The Beach Boys or Jan & Dean pay tribute to the glories of the Golden State. And if you’ve never taken a leisurely drive along California State Route 1, you really should give some thought to the motoring adventure.

In the meantime, you can help to put yourself in the right mindset for a PCH cruise by slipping behind the wheel of one of the California Special Mustangs built by Ford over the years.

As you might expect, with the huge success of the pony car right from the start in 1964, it wasn’t long before major Ford dealers realized that they could pump their sales even further by adding extra options and trim to create a more personalized pony for eager buyers. When Dearborn caught wind of what the dealers were doing, Ford saw the potential in these specialized versions and for 1968 it got into the act by building a limited number of Mustangs called the California Special.

“California Made It Happen”

As you can see from the photos on these pages, there have been several versions of the Mustang GT/CS over the years and when it was introduced the marketing theme for the car was “California Made It Happen.”

Mustang GT/CS features on that first car included fog lights, twist-type hood pins, side scoops, a rear spoiler with end caps and taillight panels with 1965 Thunderbird taillights (but these were non-sequential). There also were side stripes with the “GT/CS” logo along with a rear decklid stripe. (While they were badged as the GT/CS, they did not automatically include the GT option package although it was available on the car.)

The California Special could be equipped with any of the Ford engine and transmission combinations available for 1968 although most were produced with a 289 or 302 cid V-8 and twobarrel carburetor, teamed with a C-4 automatic transmission. These days, among the most sought-after examples of the ’68 California Special are those built with a 390 V-8 or a Cobra Jet 428 but only a small number of those were made.

Today’s California Special is a Mustang GT fastback coupe or convertible featuring a fading stripe that runs from the 5.0 side badge to the rear fender scoop. An “Ebony Black and Race Red” script California Special badge is found on the trunk lid. At the front there’s a blacked-out open grille and the car rides on special five-spoke painted machined wheels.

“Few things are more satisfying than dropping the top on a California Special and taking a drive down the majestic Pacific Coast Highway,” said Mark Conforzi, Ford designer. “This signature design takes its cues from the original California Special, while enhancing the personality of today’s Mustang.”

Power is a major draw in the current automotive marketplace and the 2019 Mustang GT’s 5.0-liter V-8 turns out 460 horsepower and 420 lb.-ft. of torque, and according to Ford will reach a top speed of 155 mph. That can be directed through a 6-speed manual that’s assisted by something the company calls revmatching. Here’s how Ford describes the feature: “Advanced rev-matching helps smooth out shifts by first predicting shifts then quickly matching engine rpm—similar to the heel-and-toe methods the pros use. On downshifts, engine rpm instantly kicks up to smooth out the transition between gears.”

This, however, raises the question of whether you need or even want 460 horsepower under the hood for an enjoyable drive along PCH. Maybe something closer to the 195 hp range would do quite nicely. After all, you certainly wouldn’t want your leisurely West Coast cruise interrupted by a police officer with a speeding ticket.

And speaking of the police…

Don’t Try This While In San Francisco…

Chances are you’ve seen the famous chase scene between the Mustang and the Charger in the otherwise unremarkable 1968 movie “Bullitt.”

If you haven’t, you can easily find it by searching for Bullitt Car Chase on the Internet.

The Ford and the Dodge were specially prepped for the high-speed run over the hilly streets of San Francisco and it’s certainly worth calling up on your computer screen even if you’ve already seen the cars in action multiple times.

The chase revolves around Steve McQueen, as San Francisco Detective Frank Bullitt, as he attempts to apprehend two hit men. If you’ve not seen this segment, we won’t give away the ending here. Let’s just say that the bad guys did not escape and the cars suffered some punishment as well.

Interestingly, the fate of the movie Mustang became something of a detective story in its own right that was only recently solved.

As it turned out, two identical ’68 Mustang GT fastbacks were used in the Warner Bros. movie and after the cameras stopped rolling the cars went in two very different directions. The vehicle driven by McQueen in the movie was sold by the studio to a private buyer and the other—seen in many of the jumps during the famous chase—wound up in a salvage yard.

The jumper vehicle resurfaced in Baja, California, in early 2017.

The other pony came to light a little after that when the owner contacted Ford to see if they like to use it in corporate promotions. The owner’s late father had purchased the car in 1974 and over the years the famous vehicle had even served as a driver. As you can see here, it shows its road wear and it’s going to be preserved in that condition. It also has retained some souvenirs from its movie career including camera mounts welded underneath, a Warner Bros. parking lot sticker, and the missing backup lights that McQueen wanted removed. After the vehicle was authenticated, it was displayed at the 2018 North American International Auto Show in Detroit last January and in April it was temporarily placed in a glass “garage” on the National Mall in D.C.

The Second...and Third Time Around

Ford came out with a Mustang Bullitt in 2008 and that car came in the same Dark Highland Green paint as the original but instead of the 390 V-8 that powered the movie car, the 40th Anniversary edition carried a 4.6-liter V-8 engine rated at 315 horsepower and 325 lb.-ft. of torque.

Now, five decades after the movie debuted, a 2019 Bullitt will be available this summer. The new Bullitt has all the items in the Mustang GT Premium and Performance Package but it also “maintains the original Bullitt’s understated persona,” Ford said.

“This new Bullitt is, as Steve McQueen was, effortlessly cool,” said Darrell Behmer, Mustang chief designer. “As a designer, it’s my favorite Mustang—devoid of stripes, spoilers and badges. It doesn’t need to scream about anything—it’s just cool.”

Exterior paint choices are limited to the Dark Highland Green seen in the movie and Shadow Black. Other features “that pay tribute to the car McQueen drove” are chrome accents around the grille and front windows, 19-inch aluminum wheels, red-painted Brembo brakes and a black front grille.

Furthermore, unlike the California Special, the Bullitt uses minimal badging, with the only exterior sign being the circular faux gas cap with the Bullitt logo on the rear of the car.

And unlike the original movie car, the new version has a 12-inch alldigital LCD instrument cluster and an optional Bullitt Electronics Package that includes “navigation, driver memory seats and mirrors, an upgraded sound system and a Blind Spot Information System with Cross-Traffic Alert that can alert the driver to vehicles detected in difficult-to-see places.” (That might come in handy if hit men in a black Charger were lurking nearby.)

Now that extremely powerful engine has just presented a very interesting thought. Next time you watch the clip of that San Francisco car chase, try to imagine the Mustang taking and cresting those asphalt hills at 160+ mph.

You have to wonder if even Steve McQueen could have maintained his legendary “cool” in a situation like that.