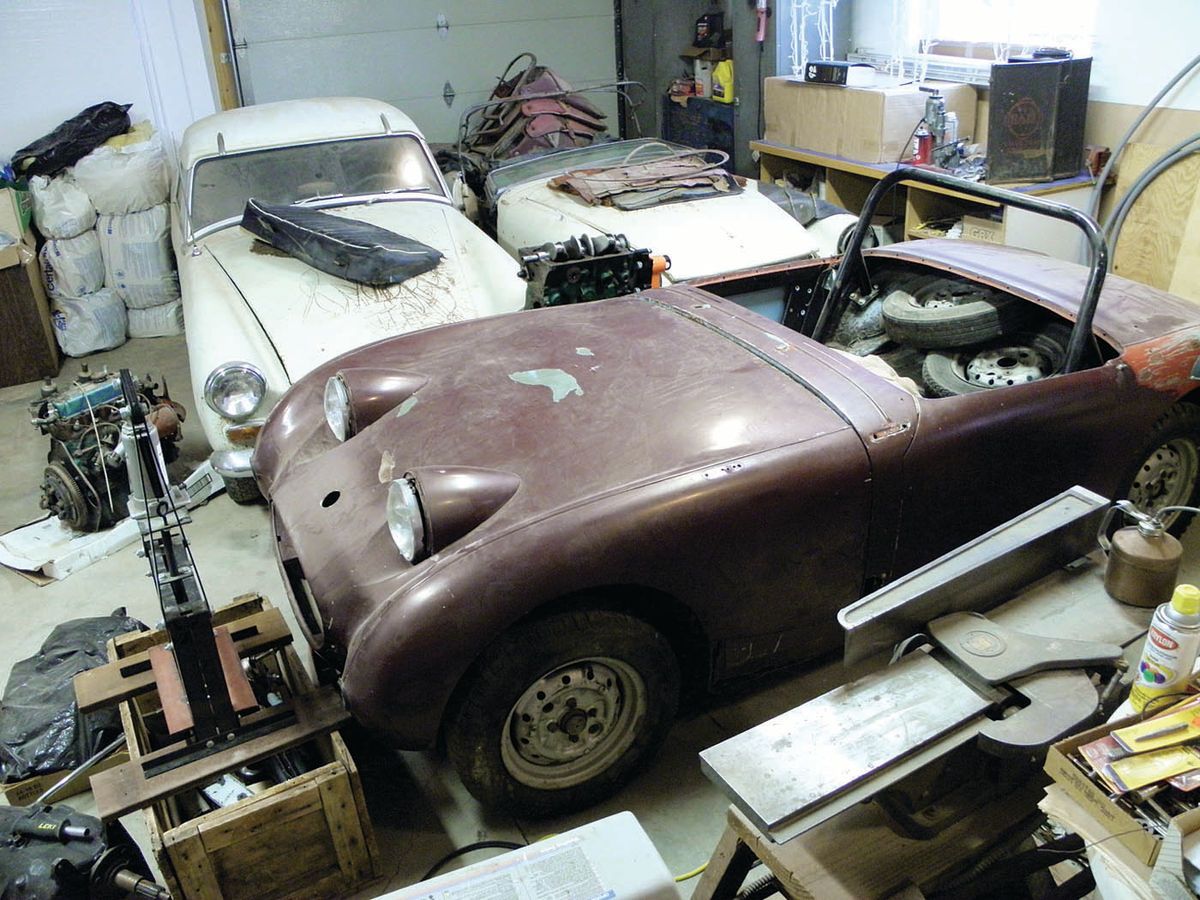 Some Tips for Tuning SU Carburetors

As a Cash-Strapped College Grad He Developed His Own Approach. But Then He Drove From Denver to New Orleans…

I JUST FINISHED reading Part 2 of the articles on rebuilding SU carburetors in the January issue of your wonderful magazine and wanted to add my own thoughts on the subject.

These carbs look funky compared to, say, Holleys and Rochesters, but they are really a straightforward CV (constant velocity) carburetor similar to Mikunis and others used on a lot of motorcycles.

The CV design in the SU carbs works by the lift of the piston in the “Top Hat” suction chamber relative to the throttle butterfly opening and engine rpm.

As air flow increases into the engine, the piston rises to allow a bigger cross sectional area in the venturi section of the carburetor so that the velocity of the air flowing across the needle and jet remains essentially the same at all engine speeds. By Bernoulli’s principle, if the velocity remains the same, the suction will remain about the same leaving the needle diameter at the “mouth” of the jet to control the fuel flow.

Because the jet is tapered from large at the top to smaller at the bottom, higher piston levels will expose a smaller diameter on the needle, leaving a larger opening in the mouth of the jet and allowing more fuel to enter the air stream to power the engine.

The information in the previous paragraph may be a mouthful, but as noted, the design of these carbs is actually pretty straightforward: The needle size regulates the fuel flow from the jet; not the change in velocity of the air.

Most typical American carburetors that we encounter here in the states use a fixed jet and venturi size allowing the change in the velocity of the air through the venturi to change the pressure drop to draw more fuel at higher air flows.

Americans change fixed jet sizes to adjust lean and rich running engines; the British adjust needle taper and the needle position at the top of the jet to adjust the mixture.

Hundreds of needle profiles have been developed as listed in the reference book “Tuning S.U. Carburetters Including Full Needle Charts” (Speedsport Motobooks, England), plus a few tuners have even been known to file a needle to create a unique taper.

Time for My First Adjustment

I acquired my first Austin-Healey Sprite in my last year of engineering school and began rebuilding that non-runner shortly thereafter. Once the Sprite was running, my old 1939 Ford was retired making the Sprite my daily driver.

When the time came to adjust the carbs, my reference book said to use a Unisync carb synchronizing tool to measure the airflow at idle or use a piece of rubber heater hose to listen to the air flow at the mouth of the carb.

Being a poor recent college graduate, buying a Unisync was out of the question and one can’t just be rented down at the local tool rental outlet.

Being an engineer, the somewhat subjective procedure of listening through a hose was not appealing so a mechanical route was explored.

With a mechanical route, the assumption must be made that all of the parts are essentially identical in size. With identical parts, making their location equal at both carbs should then make both carbs function the same.

This method seemed to work well for me with many miles of mostly trouble free driving.

Being an engineer, the somewhat subjective procedure of listening through a hose was not appealing so a mechanical route was explored.

Taking the mechanical route, the throttle linkage was first adjusted so that a pull on the throttle cable would move both butterflies off their seats at the same time. With the worn throttle shafts and other worn parts on my car, this process was tedious but then again, it didn’t take too long to complete. The idle screws were then positioned so that they both just touched the throttle linkages but didn’t yet move the butterflies off their seats. With the air cleaners off and the choke linkage loose, each piston can be lifted with a popsicle stick or similar “soft” object so that the position of the top of each jet can be viewed relative to the floor of the venturi section of each carb. By turning the jet adjusting nuts (seen below the spring in photos 6 and 7 on page 23 in the December issue), the top of each jet can be made flush with the floor of each carb.

I stopped each adjusting nut with a “flat” on each nut facing straight out from the throat of each carb. A reference line was then scribed on the flats with the sharp tip of my knife blade since I didn’t have a Sharpie handy to mark each flat. (The top of the jets should never protrude above the floor of the carburetors or the pistons will not sit tight on the floor allowing too much air flow at idle and just-off idle.)

At this point, each adjusting nut was turned three flats down to slightly lower the jets, and the idle screws were turned one turn in to just crack open the throttle butterflies.

The choke linkage was then connected and adjusted to allow a little free play where the pins on the cross rod meet each carb linkage but so both jets would start moving down at the same time when the choke cable was pulled.

These carbs are not “choked” by limiting the airflow as in typical American carburetors but by dropping the jets on the needles to allow a higher fuel flow into the air stream. The car was then choked, started, and run until the engine was warmed up so a final idle adjustment could be made. With the choke pushed in, the jet position seemed to be about correct so no further adjustment was made there.

(At this point in my learning curve, I didn’t really know how to make any further adjustments to the jets.)

Then the Atmospheric Pressure Changed…

Now comes the fun part where a trip taught me more about adjusting the jets.

One of my old college roommates was working in New Orleans and he invited me to come down for Marti Gras, 1980. I took a week off work and started out in my Sprite from Denver, the Mile High City at about 12 psi atmospheric pressure, for New Orleans which is right at sea level; 14.7 psi atmospheric pressure. Higher air pressure means a larger concentration of O2 per cubic foot of air AND more “force” to push that oxygen rich air through the air cleaner and inlet passages when the intake valve opens and the piston drops to create a vacuum in the cylinder.

The lower air pressure at a mile high means a lower concentration of O2 in the air AND less force to push that thin air against a vacuum; a double whammy.

As I headed out of Colorado and over toward the Texas panhandle, my little Sprite began running rough.

At first I didn’t realize that the information from the last paragraph was playing tricks with my engine and what I was feeling was a lean fuel problem. I was thinking that I needed to pull over and check my points and plugs but on a whim I reached over to pull the “choke” cable out a bit which dropped the jets, giving a richer mixture.

Wow! Now with a smooth-running engine again, my college studies suddenly came flooding back to me with the info related in the previous paragraph. As I drove along the vibration of the car and the tug of the choke return spring would gradually pull the choke cable back in creating the lean miss and I would again pull it out a bit.

Just before my next stop, I held the choke at the optimum running level for the engine as I pulled into a gas station. I cut the engine, popped the hood, and ran each jet adjusting nut down the same number of flats until they both were seated against the jets in their new optimum running position.

I made an additional adjustment going across Texas and did a final adjustment in New Orleans, each time turning both adjusting nuts the same number of flats to keep both jets at the same position on their respective needles.

Coming home I watched the map for areas where the elevation really changed. When I stopped for gas, I would run each adjusting nut up the same number of flats then run with the choke still partially out until I had climbed high enough for the car to run with no extra choke.

After I got back to Denver, the adjusting nuts were run up until the scribed flats were forward indicating that the tops of the jets were flush with the floor of each carb. The car was then run locally while using the choke to find a smooth running position for the jets with no lean miss. The adjusting nuts were then brought down equally until they were again seated against the jets. If I remember correctly, the nuts were turned two and a half flats, not quite the three flats I had initially used but very close.

As was said previously, the tops of the jets should never be positioned above the top of the carb floor. If a car will not get a lean miss with the jets set flush with the carb floor, then fatter needles are probably needed to restrict the fuel flow. If the jets need to be lowered more than about 1/16th to 1/8th of an inch below the carb floor, then smaller diameter needles are needed. If extra needles of the correct size are not available, this second adjustment could be made using a small fine file to take a little material off the side of the existing needle. For dual carb setups, the needles might need to be measured with a micrometer to get them the same size after filing.

Remember to Monitor the Carb’s Oil

SU carburetors have another peculiarity. Recently a friend of mine bought a Triumph TR-6. He indicated that it ran a little rough so I asked if he had checked the oil level in the carbs. The questioning look on his face was priceless.

Basically, the damper rod that screws into the top of the carbs goes into a cylinder on the top of the pistons. This cylinder needs to be filled with oil to within about 1/4-inch of its top, not to within 1/4-inch of the top of the “top hat” suction chamber A light oil is recommended and I was told over 30 years ago to just use ATF (automatic transmission fluid) and that advice has worked well for me. The type or brand of ATF doesn’t matter, mix and match doesn’t matter; we are not running transmission gears in the oil, just a little metal damper valve.

I hope my experiences will provide a good addition to Mr. Hoyt Childers’ wonderful articles and might help other SU owners get their cars running better if they are having problems.

As a final note, in pictures 26-28 on page 13 in the January issue, a third return spring needs to be added from the throttle linkage to the center hole in the heat shield between the two springs shown in the pictures.