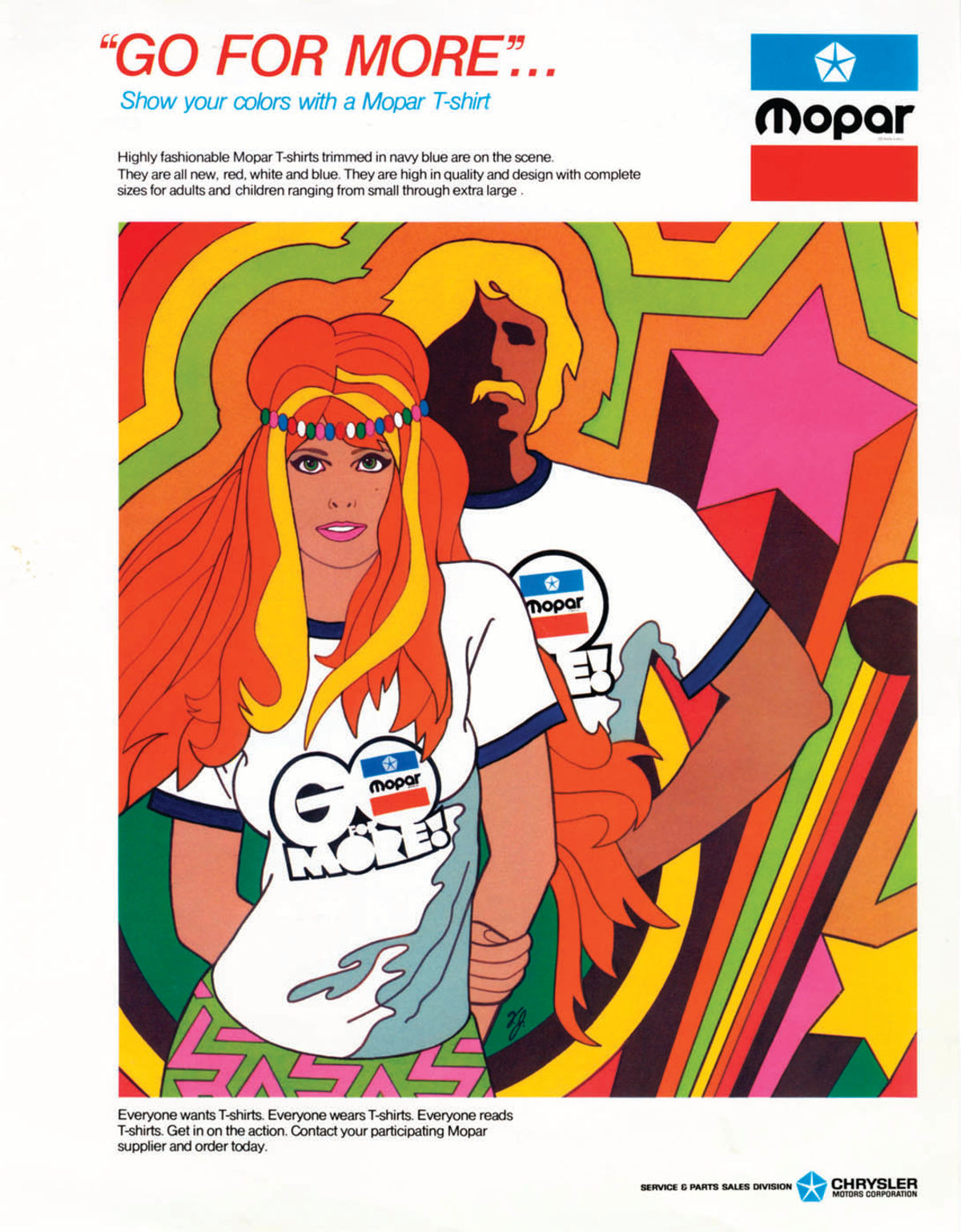 The Brand Started Out In a Small Way and Has Grown Into a Global Enterprise. Let’s Take a Look at Its Evolution Over the Decades.

When someone mentions the word “Mopar,” quite possibly the first image that will come to mind is a late-’60s, tire-smoking muscle car such as a Plymouth GTX or a Dodge Charger R/T, each with a 440 cid V-8 stuffed under its hood.

Or maybe your initial Mopar vision goes back a few years further, to the 1955 Chrysler C-300 with its 331 cid Hemi V-8, the first of the Chrysler “Letter” cars that went on to become known as “the Beautiful Brutes.”

If images of performance cars, some of them painted in bright hues such as Plum Crazy purple or the vivid green known as Sublime or flashy orange called Vitamin C, race before your eyes, it’s not at all surprising, because with the ’60s the term “Mopar” became synonymous with performance. And it was about that time that it became common to hear a Chrysler-products enthusiast greet a kindred spirit with the phrase “Mopar to Ya!”

But along with the many memorable vehicles produced by Chrysler (and now Fiat Chrysler Automobiles or FCA) over the years, other images should come to mind when you hear someone mention the word “Mopar” which, by the way, was introduced to the public 80 years ago.

For instance, you should think of… antifreeze. That’s right, the Mopar brand, launched on Aug. 1, 1937 as a contraction of the words “Motor Parts,” was first applied to a line of antifreeze products and it’s grown from there.

“The Mopar brand holds an unparalleled place in the automotive world, possessing name recognition, scope of service and passionate enthusiasts unmatched by any other service and parts organization in the industry,” said Pietro Gorlier, Head of Parts and Service (Mopar), FCA–Global. “From humble beginnings as a simple name for antifreeze products, now the Mopar brand reaches customers in over 150 markets offering parts, service and innovative care throughout the whole customer journey.”

Since this is the 80th anniversary of this well-known automotive brand, it seems like a good time to take a look at how it’s evolved over the years and the influence it’s had on generations of car owners. So let’s go:

The Brand Is Born

In 1937, six years after the Chrysler Motors Parts Corp. plant was opened in the company’s complex in Highland Park, Michigan, a company marketing group was formed to develop a name for the antifreeze used in Chrysler cars. Mopar was the name they chose.

Interestingly, one of the first presentations of the Mopar name to the public involved a figure not generally associated with cars. It seems that Chrysler was asked to provide a float for a parade that opened the 1937 Shriner’s convention in Detroit. The company built a 10-foot-tall camel, made entirely of automotive parts. Signs on both sides of the desert animal read: “Mr. Mopar.” A small “mechanical man” named ACCY (for accessories) was placed on the float as if he were leading the camel.

The World War II years saw Mopar and Chrysler, like all of the major automotive manufacturers, shift production to military parts, weapons and vehicles.

After the war, Mopar moved into a building on Jefferson Ave. in Detroit, and soon after in 1947, the Master Tech program was launched to train Chrysler auto technicians.

By 1953 Mopar had grown in both the number of its facilities nationwide and the number of available parts. The sprawling Mopar Parts Depot in Center Line, Michigan, a few miles north of Detroit, opened that year and it’s still in operation. Today the facility houses some 1300 employees and more than 16.5 million parts are shipped out annually from the Center Line complex.

On the product development side, with the birth of the Chrysler Hemi engine in the ’50s, Hemi-equipped race cars drew immediate attention on the tracks and launched the highperformance theme that would set the tone for the familiar “personality” of the Mopar brand.

The ’60s and ’70s Brought an Accelerated Interest In High Performance

As the 1960s progressed, electrical items and glass products were added to the Mopar parts line, and performance became a key factor in the brand’s parts and operations. Among the Chrysler introductions at the time were the 1962- 64 Max Wedge engines as America’s love for horsepower took off.

Meanwhile, a group of Chrysler engineers known as the Ramchargers had been working nights and weekends to make their project cars faster at the drag strip.

The high-performance parts the Ramchargers developed led to the Mopar Direct Connection brand of racing parts. Direct Connection parts were first available only to professional racers, but the line later became open to the public.

One pro who definitely took notice of the product line was the legendary “Big Daddy” Don Garlits who became what the company has termed “a lifelong brand ambassador for Mopar.”

The 426 Hemi was unleashed on the race tracks in 1964 and became just as notorious on the streets when the 426 Street Hemi came out in ’66. And as the number of Dodge, Plymouth and Chrysler performance enthusiasts grew, they adopted the word Mopar to describe their vehicles. Quite often the term Mopar was the first reference and the make came second, as in “He drives a Mopar; a ’68 Road Runner.”

Industry Changes Were In the Works

The 1970s and ’80s led to many changes in the auto industry with more emissions controls, gas shortages and climbing fuel prices...and the end of the ground-pounding Motown muscle cars.

The Direct Connection line of Mopar performance parts was later changed to Mopar Performance to capitalize on what was by then a strong Mopar brand recognition.

By 1987, Chrysler had purchased the assets of American Motors and the Jeep brand came into the corporate family, resulting in the addition of Jeep parts and accessories for the expanding Mopar portfolio.

More Technology… and a New Hemi

By the 1990s, cars had become quite complex and manufacturers’ increasing use of technology called for additional training for automotive technicians. With that, more emphasis was placed on initiatives like the Mopar College Automotive Program (CAP) introduced a few years earlier. In concert with community colleges around the country, the two-year training-internship CAP program supported by Mopar continues to produce skilled automotive technicians.

By the time the new millennium rolled in, training and technology were key words at Mopar while performance also was making a comeback. Indicative of the return of a need for speed was the introduction of the new Gen III Hemi engines.

Vehicles With a Mopar “Package”

In 2008, with an eye toward its performance heritage, Mopar introduced its first factory-built “package car” in 40 years, called the Mopar Dodge Challenger Drag Pak. The 100 package cars sold out quickly, and new Drag Pak models have sold out in subsequent years.

In 2010, the brand produced the first of an ongoing series of limited-edition factory performance vehicles, the Mopar ’10 Challenger. Production was limited to 500 of the vehicles, modified at the factory with Mopar parts and accessories. Other low-run, factoryproduced Mopar rides would follow: the Mopar ’11 Charger, Mopar ’12 300, Mopar ’13 Dart, Mopar ’14 Challenger, Mopar ’15 Dodge Charger R/T and Mopar ’16 Ram Rebel.

In recent years, customers have been given the option of adding Mopar accessories during the ordering process and having their vehicles delivered to dealerships with accessories installed and included on the window sticker. This optional work is done through a network of 11 Mopar Custom Shops worldwide. The newest Mopar Custom Shops, in Mexico and Brazil, opened in late 2015.

Construction began in 2016 on two new Mopar Parts Distribution Centers in the United States, soon to join the current network of over 50 PDCs in more than 20 countries, established to service owners and dealers across the globe.

While expanding globally, Mopar has not lost sight of its performance roots by supporting drag racers in National Hot Rod Association (NHRA) competition. The brand saw back-toback NHRA Pro Stock championships in 2012- 2013. Mopar-sponsored Dodge Charger R/T teams fielded by Don Schumacher Racing have led in the NHRA Funny Car class, claiming four championships in the last six years and spearheading the capture of the NHRA Manufacturers Cup by the Mopar and Dodge brands in 2016.

Off the track, Mopar continued to create parts and accessories to help owners design rides that suit their individual lifestyles. The brand introduced a Jeep Performance Parts line to deliver trail-ready parts to offroaders and, in late 2016, brought new Mopar Crate Hemi Engine Kits to market, enabling enthusiasts to install current Hemi engines into vintage vehicles from 1975 and earlier. (For more on those Hemi installation kits, see the January issue.)

Overall, Mopar now serves customers in some 150 markets with more than 500,000 parts and accessories and it continues to grow. That’s quite a ride for a brand that started out with just a can of engine antifreeze.