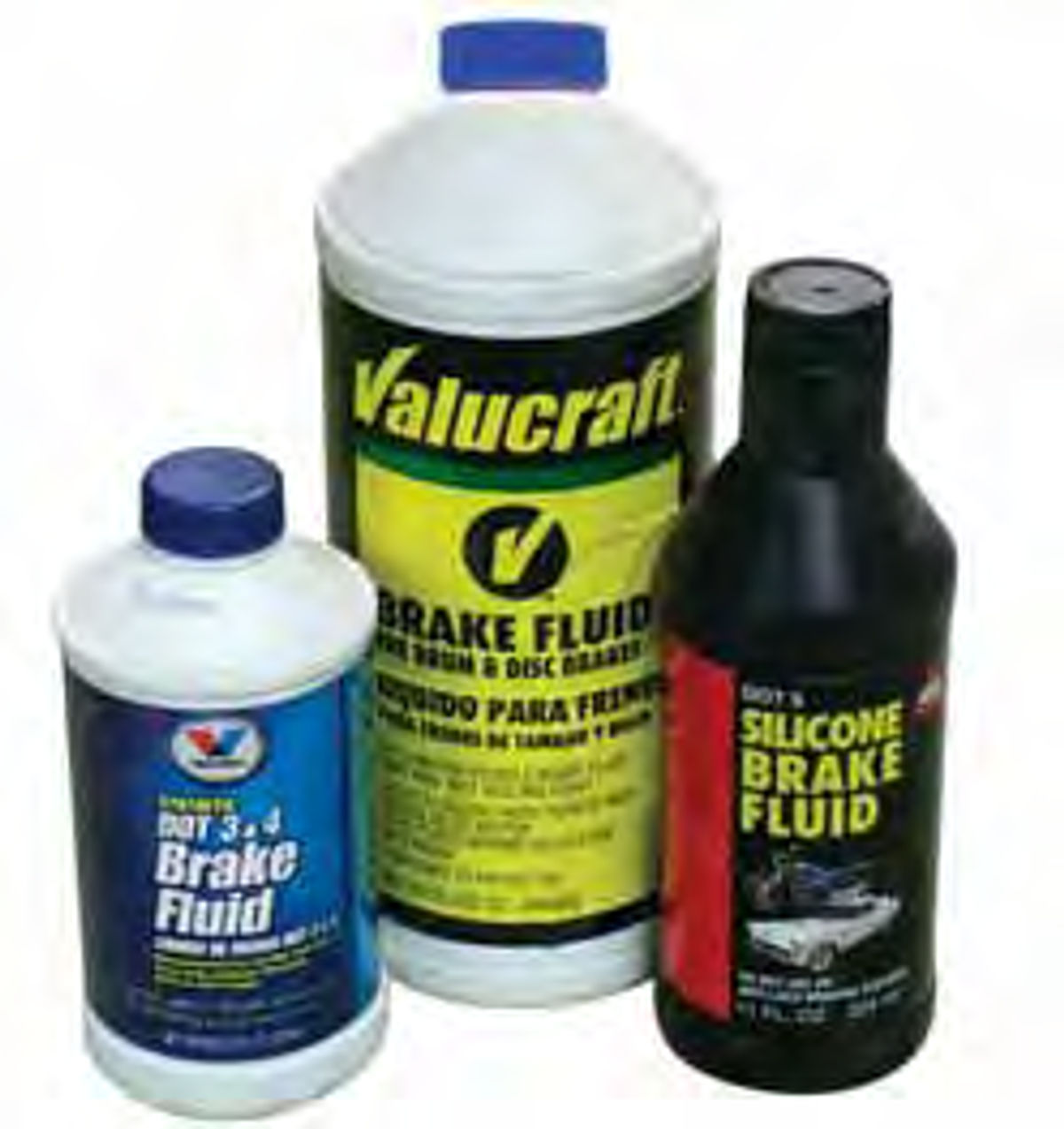 How -to A Follow-Up Forum On Disc Brakes

Our Braking Series Generated Reader Questions & Comments. So We Asked the Restoration Pro/Author to Join In.

Pick the Master cylinder for Your System

I really enjoyed your recent disc brake articles but I have a few comments to pass along concerning the selection of master cylinders.

Is There Room for a Two-Bowl Master?

I have a mostly original 1955 Olds 88 that has power brakes. I like the idea of swapping the front drum brakes for discs and have found disc brake kits and 15- inch wheels to fit my car.

As I recall, things are packed pretty tight under the 88, but there should be enough room to SQUEEZE a larger master cylinder under there. The only way to be sure is to purchase a master cylinder and do some eyeballing.

Street rod builders make this swap all the time and quite often they find enough room to include a small booster with the master cylinder. This is something I definitely would consider since the 88 is a very heavy car. Look for a7-inch-diameter booster/master cylinder combination. These units are set up for and large enough to accommodate disc brakes. If you just want a master cylinder under there, go with a unit for the 1980 Corvette and add an adjustable proportioning valve to the rear brake line.

I’m also wondering if your 88 came with a fender skirt-mounted brake booster. (Ford did this a lot.) If so, you can retain this unit and simply route the front brake line from the master cylinder through this unit, then out to the car’s front disc brakes.

A Tip for Using a Vacuum Bleeder

While reading your follow-up article on disc brake conversions I recalled a problem I had while trying to bleed the brakes on my car.

When I try to use the vacuum pump I never seem to get fluid without some air in it. I think the air is coming around the threads on the bleeder. Does this sound right to you? Ifso, do you have a trick to stop this from happening?

That’s the problem with using a vacuum bleeder. They do a great job of pulling fluid from the master cylinder out to each of the wheels but I rarely get enough of a vacuum to rid the clear vacuum tubing on the bleeder of air bubbles. My trick is to loosen the bleeder and coat it with axle grease.

It isn’t foolproof, but it definitely helps seal the bleeder threads and the rubber fitting on the vacuum pump.

How can I clean the DOT 5 fluid out of my brake system prior to changing to DOT 4?

If it’s DOT 5, which is silicone-based, you will need to completely disassemble the system, then flush the lines and clean the individual components with naphtha. You can find naphtha at your local home improvement center on the paint thinner aisle.

I Had Problems With DOT 4

I restored a 1946 Dodge Pickup and used DOT 4 in the brake system. In about a year the pressure-style brake light failed. I replaced it and everything was fine. Later, I restored a 1948 Diamond T and filled that brake system with DOT 4. Eventually the brake light on that system failed. I removed the DOT 4 from both brake systems and replaced it with DOT 3 and have not had a problem with the pressure-style brake switches since. Have you ever experienced this type of brake fluid problem?

This Is a problem I’ve not experienced. All of the older brake systems I’ve restored have DOT 3 in them. I checked with a truck restorer friend of mine and found that he has experienced the same problem with DOT4. I Told him about your remedy.

A Racer’s Take on Brakes

I enjoyed your article on disc brakes but I couldn’t help but approach this subject from the viewpoint of a long-term SCCA road racer. For example, what you called “shims” we refer to as “wheel spacers.”

It is worth noting that not only does the use of spacers require longer studs, they can also cause sheer stress on the studs. The studs are designed for strength in tension and longer studs with spacers have higher loads in both bend and sheer, which can sometimes lead to failure. Any time you need longer studs you also need stronger studs. That often calls for a step up in stud diameter.

You also stated that glycol-based brake fluids provide some rust protection by absorbing moisture in the system. In severe services, such as autocross racing, the water in the fluid can actually boil and turn to steam. Steam is highly compressible, not something you like to see in your brake system. I use Motul RBF 600 for racing applications as this fluid has an unusually high boiling point. Motul DOT 5.1 has similar characteristics and is ABS compatible. Both are synthetic fluids.

In the January article on disc brake tips you state “Glycol-based brake fluid absorbs moisture in the braking system, preventing rust from forming in the lines and master cylinder.” Since this is pretty much the opposite from what we have been hearing for years, this statement needs some clarification.

I imagine the explanation will include that DOT 3-4 absorbs and holds moisture and that the wetted fluid will be flushed out when the fluid is changed. I guess that means the fluid must be changed when it gets discolored, and not ignored like most of us do. If left too long, the fluid will cause the corrosion we have been warned about. This is my conjecture; you must put out some extensive clarification.

I’d also like to know how to flush a brake system with DOT 5 since this fluid does not absorb any of the moisture that might accumulate in the low spots of the system.

I’m not sure what you have been hearing about brake fluid that is opposite from what I wrote in the article unless it is the lack of brake fluid information in the owner’s manuals on new cars that leaves you to assume brake fluids should never be changed.

As I said in the article, I’ve never changed brake fluid just for the sake of changing the fluid. Never thought there was a need. I’ll definitely be rethinking that position now that my shop truck is older than my dog and he’s old, very old. Which, of course, brings me back to the basic idea of the disc brake articles, ensuring stopping power on vintage vehicles. That would be any vehicle 25 years old or older.Those are the vehicles focus on and the vehicles most likely to be in dire need of a brake fluid flush and a fluid change.

Asfor how best to change fluid, including DOT 5,I’m sure there are many ways to accomplish the task, but for systems with anything but DOT 5 I’d lean toward opening all four bleeders at the wheels and pumping the brake pedal to force the fluid out of the system. Be sure to use catch pans at all four wheels.

Keep an eye on the master cylinder and as the fluid drains down keep refilling the unit with clean DOT 3-4. I’d flush a full quart of new fluid through the system and when each wheel bleeder produces clean fluid, I’d call it good.

If the system has DOT 5, a silicone based fluid, I would disassemble the system, like I do in a restoration, and clean the lines with naptha.

I’d also use air pressure to force the naptha through the lines to help with the system cleaning.

Is Water Absorption Bad or Good?

I must disagree with your conclusions regarding brake fluid. I believe that the fact that glycol brake fluid absorbs moisture is bad, not good. (I know people use the term “hydroscopic” because it sounds right, but the correct term is “hygroscopic.”)

The water in a brake system is not encapsulated or altered by the brake fluid and, therefore, remains capable of causing rust even after it is absorbed by the fluid. What do you think?

Note: A question of this type came from several readers.

My dictionary doesn’t have “hydroscopic”, but it does have “hygroscopic,” which means “attracting or absorbing moisture from the air.”

As For Whether The ability of brake fluid to absorb moisture is good or bad,I’ll Still stick with good

That’s qualified with the fact that I now know glycol-based brake fluids should be changed on occasion. It’s like motor oil turning thick and black. One look and you know it needs to be changed. The same thing applies for brown, sludgy brake fluid. That indicator is telling you the system contains moisture and the fluid needs to be changed.