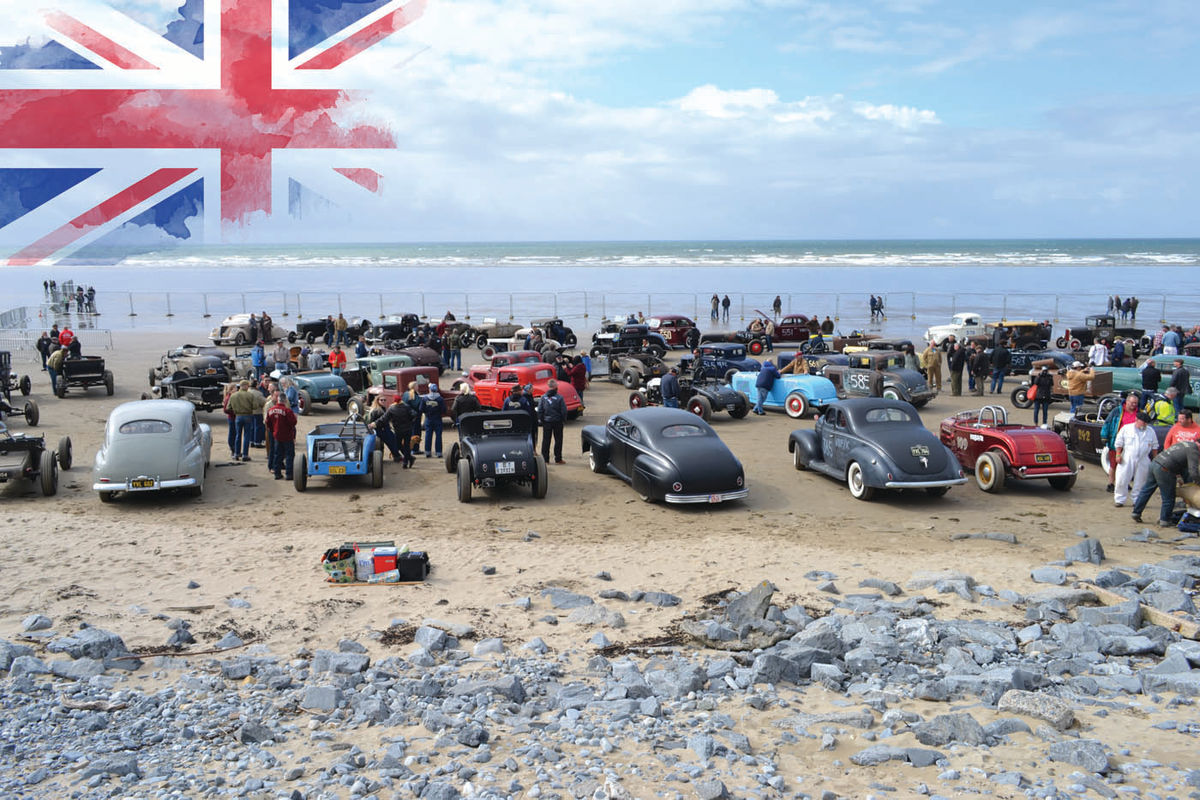 BEACH RACING With Detroit Iron... In the UK

Editor’s note: We’re all familiar with the sight of modified domestic rods racing in the U.S., such as the yellow 1931 Model A featured in our November issue, but the sport isn’t limited to our beaches and tracks. For example, reader Kevin Flood, who often reports on the state of the restoration hobby in the UK, recently took in a weekend of vintage beach racing at Pendine Sands on the south coast of Wales. The annual event is sponsored by The Vintage Hot Rod Association, a very interesting UK group that’s focused on American rods from decades ago.

Here’s how the organization describes itself: “The Vintage Hot Rod Association is all about old cars that look like they may have caused havoc at a dirt track in the thirties, roared across a dry lake bed back in the forties, maybe tore up a drag strip in the fifties, or perhaps just cruised the streets of Southern California taking their owners nowhere in particular.

“We are now creating our own history, by hosting some of the most revered events in hot rodding. We support, promote and represent hot rodding throughout the UK.

“To become a member of the VHRA, you need to own a car of pre-1949 US manufacture, built in the style of a traditional hot rod or custom. We’re not just talking period perfect recreations, but cars that evoke the true spirit of a bygone era. Old cars modified using old parts is our mantra, and from mild customs to race cars, they’re all welcome at the VHRA.”

Now that we know something about the sponsoring group, let’s head across the Atlantic for a weekend of beach racing with Kevin…

The Vintage Hot Rod Association held their 7th annual Hot Rod Races on the famous Pendine Sands over the weekend of the 15th/16th June 2019.

The weather in the UK at that time had been damp to say the least, earning the nickname of “Monsoon June,” so fingers were being crossed all round weatherwise as we headed into the weekend.

Most of those visiting the event stayed local to the sands and this gave the Pendine Sands Holiday Park a real 1950s flavor with a lot of American iron on display outside the caravans. (That’s a camper, RV or trailer in the U.S.)

The Vehicles Started Lining Up…

Tech inspection began on Friday, and this was where you could see the sheer variety of vehicles that were taking part in the event. From speedsters, to stock cars, to family saloons the full range arrived for inspection. As you would expect, the dominant make was Ford and in particular Model A- and T-based vehicles, which was to be expected at a Hot Rod event.

Friday night saw the predictable overnight downpour but the early start on Saturday saw a really nice sunny, if a little breezy, start to the day. An enjoyable preracing bonus was watching the parade of cars making its way onto the beach and into the pits.

Lots of Planning and Work Involved In This Sport

Upon reaching the pits and race areas it was plain to see the sheer amount of hard work it had taken for Neil Fretwell and his VHRA team to have the course and all the various safety and timing equipment required in place for racing to commence.

The pits area was well laid out and could be accessed via prepurchased pit passes. This, however, did not discourage the casual spectator as the event has really great viewing options from the main beach area—but for the serious geeks amongst us the pit pass is the way to go!

After a few test runs by the VHRA staff, the racing was ready to commence, albeit a little earlier than planned due to tidal and weather conditions.

The Race Classes Are As Follows:

B – Blown: Supercharger or Turbo

F – Flathead: ALL valves in block; no OHV conversions

The cars are marked with the class that they are competing in, as can be seen in some of the photos.

Underway With No Rain

Racing began and ran flawlessly into the afternoon with somewhat of a breeze, but thankfully no rain to speak of.

As you can see in some of the photos, one of the downsides of beach racing is the clean-up, but I’m pretty sure that was the least of the competitors’ worries in comparison to the sheer joy of blasting down the course in search of that elusive record time, or just out for the fun of it all.

Saturday night again brought heavy rain and an early start on Sunday, once again the pre-racing parade down to the beach added to the spectacle…even the Police turned up! (Well, actually it was one of the contestants in a black-and-white Oldsmobile decked out to look like a Highway Patrol cruiser.)

The VHRA team did an excellent job in getting the course and pits set up for Sunday’s racing despite the adverse weather conditions. As you would expect, the pits were once again a hive of activity with all the usual pre-race tweaks being carried out.

The rain kept away on the whole during the early part of the day but the wind was considerably stronger than Saturday. This, however, did not discourage the competitors from attacking the course with the same gusto as on Saturday. From a spectator perspective, traction appeared to have improved.

Then the Rain Really Hit…

The full racing program was just about complete when the worst rain of the racing days hit the beach, but everyone put a brave face on it and all runs were completed.

All that was left was for all the cars that had congregated at the end of the track to drive back down the beach in “run for home” fashion.

Even though it was raining this was a fitting spectacle to complete an excellent event. Roll on next time!