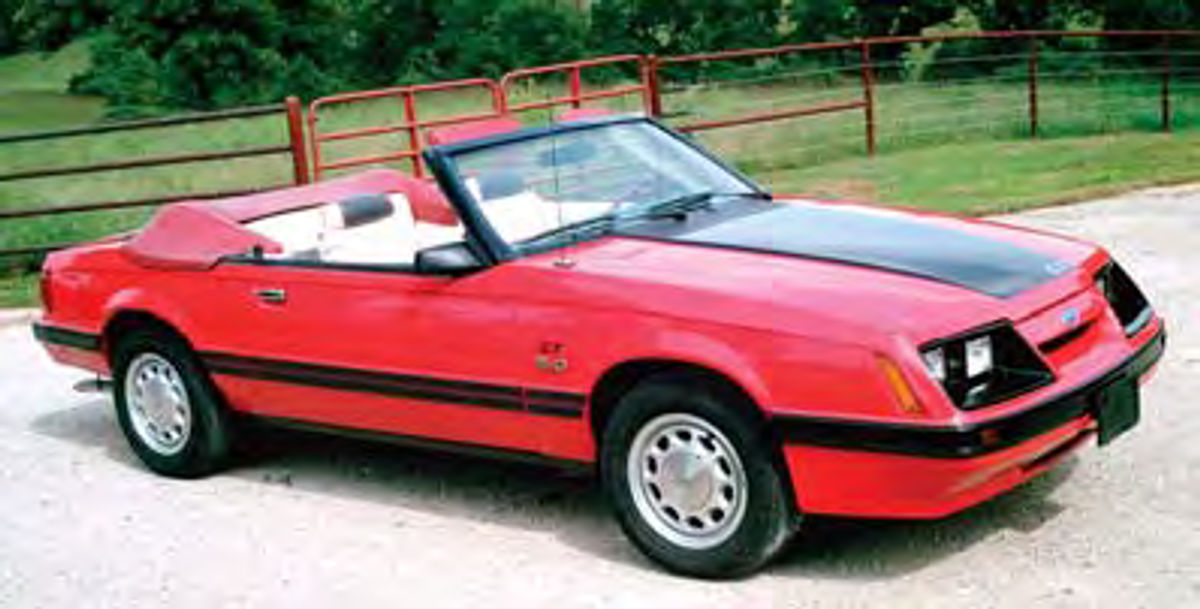 I WORKED ON this car for 11 months to revive it. Actually, I first bought a 1983 Mustang GLX Convertible and was going to bring it back, but when I got into it, there was far more than I bargained for.

The ’83 Mustang was rust-free, but everything needed work. The car had been a 6-cylinder, but had a 289 in it when I got it home, and the motor mounts were welded in, the engine sat too high in the bay, and it tilted to one side—without an air cleaner.

Also, every hookup in the ’83 Mustang’s engine compartment had been patched up to work, but was just a disaster. Furthermore, the transmission leaked out all of the fluid during the first night here, the top had been punctured, and the upholstery was unfixable.

I obviously did not look carefully enough at that one; I have no explanation for it.

Then, the 1984 convertible dropped in my lap. A local guy had bought it for the 302 HO engine, and was going to scrap the rest of the car. I made a deal for it, took out the engine and gave it to him, and had a much nicer car to start with. The 1983 then became my parts car.

I used the 289 from the parts car; it was bored and the crank turned. I installed roller rockers, a new cam, and new rings and bearings.

The radiator was re-cored and all the ancillary stuff replaced (the starter, alternator, water pump, distributor, carburetor, fuel pump and exhaust). I used brackets that I commandeered from an old LTD 302 salvage yard car.

All components of the AC system except the condenser were replaced; it now has a rotary compressor.

I had to switch the top frames, hydraulic pumps and top cylinders. (The 1984 frame was bent and the top cylinders blown.)

I also went to a 1985 front bumper cover; I like it better and the fog lights meant nothing to me. I also did not like the luggage rack and the ’87 LX taillights looked better to me, so those things were swapped. (Parts such as the bumper cover and the GT taillights that I removed weren’t discarded. I sold them on the Internet to other people doing the stuff we do.) I also went to the 1985 rear bumper cover; that allows the use of the short bolt-on body side moldings in the front and rear. The 1983 steering wheel is more appealing to me, so it was used but I had to put a horn button in the wheel center since the 1983 had the horn switch on the directional signal stalk.

I switched the dash panel and the console to the ’83 components, since the ’84 plastic was brittle and broken through in several places. Fortunately, both cars were red, with red/white interiors. I refurbished the dash pad, repairing and repainting it.

About That Convertible Top…

I replaced the top on the car, my first and last attempt at putting on a convertible top. I also replaced the pads, cables and the curtain. The video on that operation made it look a lot easier than it turned out to be.

The 1984 car originally had all four power windows, but there were lots of problems with making them fit and work (the rear windows had broken and were badly mangled—obvious problems with alignment and fit), so I left the power windows in front and put crank windows in the rear, as the 1983 car was equipped.

All of the weatherstripping on the doors, windows, trunk and top was replaced, since I pulled off all of the trim for painting. Obviously, the red/white interior was redone in white/charcoal with red trim, but I cannot take credit for that. I just chose the colors, took it out and put it back.

A purist will question what year the car really is, and whether it really is a GT now. It still has the GT dash, 15” wheels, limited-slip differential and the doo-dads that the GT had (the remote gas door and trunk release, the premium radio— which I replaced because it had problems—and the fairings under the front bumper that match up with the later bumper covers). It is titled and licensed as an ’84, and my wife and I both like the changes. Since both cars would have ended up at the crusher, maybe it is OK to personalize the survivor.

My appreciation of old cars is for them as they were, not some hacked-up version of the original with a wild paint job. I don’t mind bolt-on changes or changes made for safety reasons, like radials or dual-piston master cylinders, but cutting and welding should be to replace rotted metal. The old cars were styled and built in one condition, and those of us of that era know what should be there and how it looked.

That was a time when there was style, but it looked a certain way, and that is how I want to see it. Just one guy’s opinion.