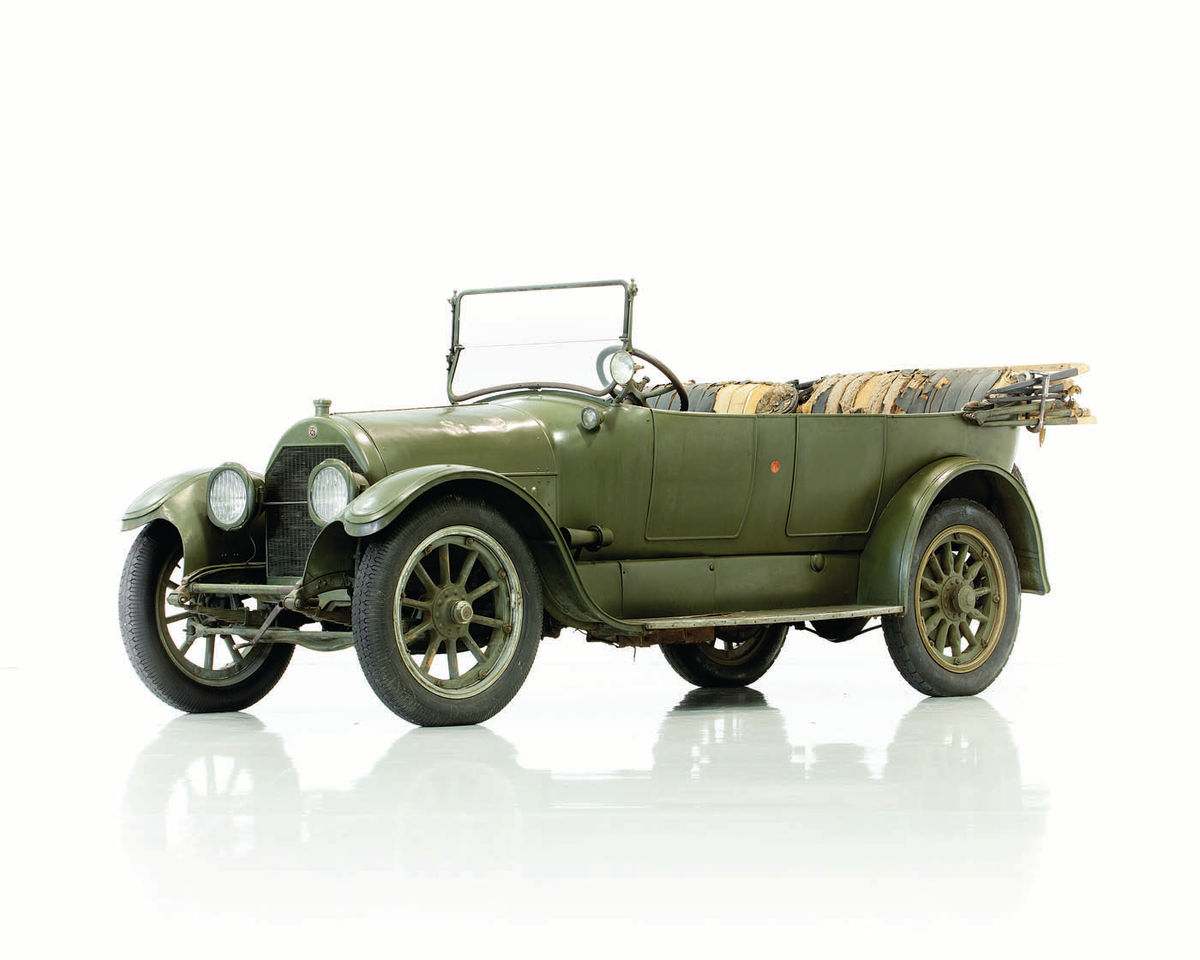 WITH THIS BEING the centennial of the start of World War I, it’s certainly appropriate that we should pay tribute to the many veterans of that conflict…including a 1918 Cadillac Type 57 touring car that arrived in France ahead of Gen. John J. Pershing and the American Expeditionary Force.

Today the car is largely unrestored, as you can see from the photos on this page, but if you’ll note the photo taken a century ago, you’ll see that it looked much better in its early years.

The Cadillac, U.S. 1257X, was originally purchased by the Rev. Dr. John H. Denison from the Cadillac distributor in New York City. Dr. Denison joined with the Y.M.C.A. in August 1917 and turned the car over to them along with his services as a driver to support America’s war effort.

The Cadillac was used to transport soldiers during the Great War and was active near the front during the Second Battle of the Marne, the turning point in the conflict that led to the Allied victory some months later.

At the end of the war the U.S. sold its motor pool equipment to France and other European buyers but somehow the Cadillac was returned to its homeland.

Decades passed before the car’s current owner spotted an ad for the Cadillac that piqued his interest. “When I first came across a used car ad describing the vehicle, I thought it might be special, but its history had been lost to time,” said owner Marc Lassen. “Researching and reuniting U.S. 1257X with its Great War provenance has been an experience of a lifetime, and an honor.”

Assisting in the detective work regarding the car’s war record was the Historic Vehicle Association (HVA), an organization founded in 2009 by Hagerty Insurance to promote “the cultural and historical significance of the automobile…” Based on the research performed by the HVA and the car’s owner, the Cadillac has been added to the organization’s National Historic Vehicle Register along with the U.S. Dept. of the Interior Historic American Engineering Record. The listing has been archived in the Library of Congress.

“The Cadillac Type 57-U.S. 1257X is a great example of a rare survivor…a vehicle that saw extraordinary use during its active life yet has survived to the present day,” said Richard O’Connor, chief of Heritage Documentation Programs with the National Park Service, U.S. Department of the Interior. “Recognizing the Cadillac military vehicle at the 100th anniversary of WWI commemorates America’s participation in the Great War and illustrates one of the many contributions the automobile has made to U.S. history.”

Added Mark Gessler, HVA president: “U.S. 1257X may well be the only complete and largely unrestored example of a WWI military Cadillac known to exist. As we approach the 100th Anniversary of WWI, the historic significance of this particular Cadillac should be recognized and memorialized as a national treasure.”

In addition to its military service, the car also is important in that it’s powered by an early example of a mass-produced V-8 engine. In fact, a century ago Cadillac became the first manufacturer to mass produce V-8 powered automobiles with the first engines being built in 1914 to be used as standard equipment on its 1915 vehicles. The V-8 in the 1918 car is a 314.5-cubic-inch L-head that was rated at 31.25 horsepower.

It also should be noted that along with its battlefront experiences, the Cadillac was afforded time for some R&R and an opportunity to work closely with a celebrity visitor from the States. It seems that sometime after the car participated in the Second Battle of the Marne, it was used by Eleanor Butler Roosevelt, wife of Theodore Roosevelt, Jr.

Mrs. Roosevelt, aided by the Cadillac, conducted a two-month mission in France “to find and create locations for soldiers to enjoy their time off.”