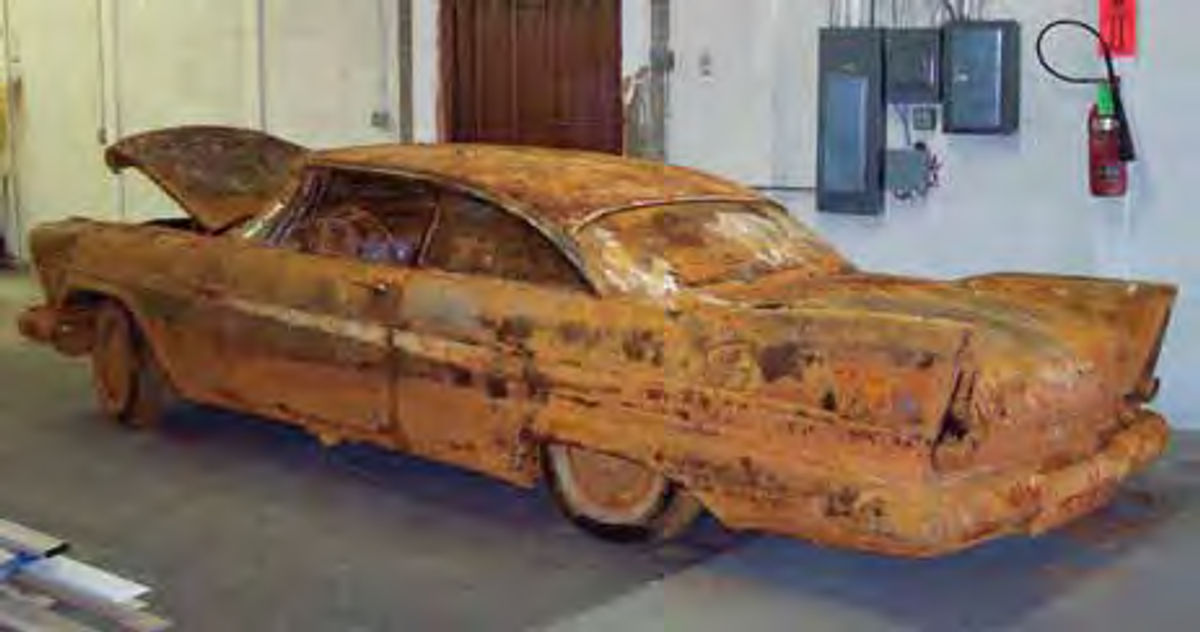 The Time Capsule Plymouth Once Resembled a Petrified Object. It Can’t Be Restored, But It’s Looking Better Now.

IN 1957, THE Chrysler Corporation offered Tulsa civic leaders a spanking new Plymouth Belvedere to stash in a time capsule as the main attraction of their Tulsarama celebration. That gift, in honor of Oklahoma’s 50 years of statehood, was accepted without question.

What no one could anticipate was the anguish that would ensue half a century later when the Belvedere was removed from its crypt. Long after most of those originally involved with the Tulsa time bomb had passed away, the world at large discovered the depths of Mother Nature’s dark side.

As Reported in AutoRestorer’s August 2007 issue,mankind was Mother Nature’s unwitting accomplice. The combination of an imperfectly sealed concrete tomb, a ruptured water main, and five decades of burial turned the brand-new Plymouth nicknamed “Miss Belvedere” into a monument to misfortune.

When the once pristine white and gold Plymouth Belvedere emerged from its watery vault as a rusty, crusty mess in June 2007, hearts were broken and tears flowed. Several old souls who had waited decades to hear the engine start and a 50-year-old car drive away were profoundly disappointed.

But an unexpected silver lining emerged from the dark cloud that hung over Tulsa Summer centennial celebration.

Dwight Foster, a New Jersey car enthusiast and president of Ultra One, a firm that markets chemicals to restoration hobbyists, flew in to help wrest Miss Belvedere from Mother Nature’s dastardly grasp.

Foster encouraged Robert Carney, the Maryland retired electrician now in charge of the hapless Plymouth’s fate, not to abandon hope, even though the experts who examined this car counseled that restoring it back to driving condition would be a fruitless pursuit since such a small percentage of its components were salvageable. Foster’s wise suggestion was to preserve the remains for future enjoyment.

By way of background, Carney is a relative of Ray Humbertson who entered a contest to win the Plymouth while traveling through Tulsa in 1957.

Humbertson’s prediction of Tulsa’s 2007 population came within 0.6-percent of the actual figure, earning him ownership of Miss Belvedere. However, he had died in 1979 and the closest living heir the Tulsarama committee could locate was a sister, Catherine Humbertson Johnson of Bowling Green, Maryland. Ms. Johnson traveled to Tulsa to accept her prize and then assigned the responsibility of deciding what to do with it to her nephew Carney.

Foster had Miss Belvedere shrink wrapped for security during its trip from Tulsa to his Hackettstown, New Jersey, headquarters in December 2007. Since its arrival, he’s invested hundreds of hours in inspecting, cleaning and preserving the remains.

Among his initial findings were: Major sections of the frame were missing. Three out of the four suspension springs failed, lowering the car deeper into the flood waters that invaded the Tulsa tomb. Parts of the carburetor and distributor were virtually dissolved, suspension components were frozen solid, one steering tie rod was broken, and the doors and windows have resisted opening attempts. Most of the interior trim had rotted to oblivion. The glass was etched by the corrosive clay that had coated every nook and cranny for years.

And as the moisture was removed, deposits inside the engine and body panels turned rock hard.

Doing What They Could

Foster obtained a donor car for the parts he needed to bring Miss Belvedere back to an even keel. The broken rear leaf springs were replaced and the front suspension was disassembled to free up frozen brake drums, wheel bearings and suspension arms.

The broken tie rod was replaced and the drive axle was immersed in Ultra One’s Safest Rust Remover to allow the rear wheels to turn again.

The steel rims were too badly corroded to maintain an airtight seal,so new tubes were installed inside the original tubeless white-sidewall tires.

The component that did the best job of surviving half-a-century of entombment is, ironically, an item that’s often troublesome in classic car service: the battery. According to Foster, no debris invaded this Plymouth’s battery; he believes that replenishing the acid and a recharge might revive its energy-storing ability.

While restoring Miss Belvedere’s ability to roll, steer, and maintain a proper ride height, Foster contemplated replacing the severely compromised frame with one from his donor car.

“I decided against that repair,” he reported. “The cage-nut attachments between the body and frame are seized and disturbing them would surely inflict further damage. Thisis, after all, a preservation effort. Since backing up from a mistake is not an available option, our goal is to make Miss Belvedere look presentable. In addition, we want it sturdy enough to withstand the rigors of a possible car show and museum tour.”

Removing Miss Belvedere’s hardened mud and rust overcoat was Foster’s most heroic accomplishment. The car arrived in New Jersey with a layer of red clay and scraps of aged protective coverings—layers of treated paper, cotton scrim, metal foil and polyethylene plastic—enveloping every surface. To soften that outer shell, Foster began with a gentle steam bath.

That set the stage for his chemicals— Ultra One Degreaser and Safest Rust Remover—to do their work.

Foster never intended to get into the chemical business. Fifteen years ago, while he was involved with an experimental engine project, a liquid solution was formulated to cleanse exhaust pipe and smokestack emissions. Penn State engineers who tested the experimental elixir found that it was effective as well as benign from health and environmental standpoints.

Later, it occurred to Foster that, if this solution could rid exhaust streams of noxious sulfur and carbon emissions, it might be suitable as a general cleaning agent. A sample was supplied to the New York-New Jersey Port Authority for evaluation in the Holland and Lincoln tunnels where a steady stream of cars and diesel trucks wreak havoc with wall surfaces. The results were far better than expected and Foster was soon in the business of supplying chemicals to the Authority in support of their scheduled tunnel cleaning efforts.

Impressed by the abilities of Larry Novack, the chemist on Foster’s payroll, Port Authority personnel then asked Ultra One to brew up something suitable for removing the rusty scale from their work equipment.

The result was another success story: Safest Rust Remover. For convincing evidence illustrating how well these liquids work, visit ultraoneusa.com. (We tried it ourselves and our results are reported later in this article.)

The Degreaser has been on the market for a decade while Safest Rust Remover entered commerce in 2004.

Both work best when a steady stream is flushed over the soiled or corroded object for a period of time. They are water based and biodegradable. Neither is flammable and they contain no petroleum solvents, acids or alkalis. Both have earned the EPA’s DfE (Design for the Environment) label. These chemicals cost $20-25 per gallon, depending on the quantity purchased, but they can be used repeatedly.

Safest Rust Remover’s pH is 5.25 according to Foster, about the same as rain water. After rust is removed, a quick dip in Safest Rust Remover followed by air drying keeps bare metal rust resistant for a month or more, he said.

Following Miss Belvedere’s steam bath, Foster used his Degreaser to return the vinyl covering the dash and upper portions of the driver’s side door to almost new-looking condition.

The car’s exterior posed a tougher challenge. Any pressure blasting or heavy scrubbing would have compromised what remained of the paint-to metal bond.

Instead, Foster used a submersible pump placed in a child’s swimming pool to direct a steady stream of Safest Rust Remover onto the Plymouth’s surface one panel at a time. Each area received a 48-hour rinse.

From a distant perspective, the Sand Dune White and Sierra Gold Belvedere looks reasonably intact and presentable considering its ordeal. But up close, the surface complexion is mottled with bumps and blisters. Clearly, the paint is barely hanging on. Were it not for the dried mud reinforcing the body from the inside, the remaining metal might fail to maintain its original shape. Because the stresses of hinging the doors open are too much for this old gal, Foster intends to leave them permanently latched.

When the right opportunity arises, Carney would like to return to Tulsa with the Plymouth and his partner Foster for another coming out party. Carney feels that everyone with an emotional stake in Miss Belvedere should have the chance to see this piece of the city’s history cleaned up and ready to resume the fight against Mother Nature’s dastardly aging process.

His long-term goal is to sell the car to the right collector or museum.

Considering what she’s been through, Miss Belvedere definitely deserves a few decades on display in some warm, dry…and publicly accessible environment.

Some Personal Experience With the Product

To put Ultra One’s Safest Rust Remover(SRR)to the acid test,I obtained a sample from the manufacturer for hands-on experimentation.

Actually, scratch the word “acid” because, as noted above, this liquidis no more caustic than normal rain water. The words “hands-on” may stay because I dipped and rinsed nine steel and one aluminum part with no rubber-glove or eyeshield protection and lived to tell my tale.

Most of my steel parts in this test had been chrome plated in the 1960s and were showing the usual pitting and rusting caused by neglect (the previous owner’s, not mine). One steeltest square had lived its life with no coating to ward off corrosion. The aluminum brake shoe entered this test with light corrosion and its friction material still bonded in place. The spring-damper unit had rubber bushings and a painted-steel dust shield; I purposely chose this specimen to see if those materials would suffer any collateral damage.

During four full days of immersion, the clear SRR liquid gradually turned dark green. Small solid particles settled at the bottom of my container while the occasional tiny gas bubble rose to the surface.

When I called a halt to the procedure and rinsed each part with warm water, the results were mixed. The bare steel plate surface changed from thick rust to dark gray speckled with small black spots, and some rubbing with a Brillo pad was necessary to remove residue still coating this specimen. That same procedure revealed specks of rust at the bottom of the pits in the once-chromed brake pedal. On the other hand, a lock assembly emerged looking brand-new. The rubber and paint on the spring-damper unit suffered no injury and the brake shoe’s friction material was also unscathed.

Overall, I’d say this product works as advertised. However, patience and a little elbow grease are necessary to achieve decent results.

Consider SRR a good alternative to— but not necessarily a replacement for— the old standby methods such as chemical dipping and media blasting.

If you’ve got a fragile or partially painted item, small parts such as springs or fasteners, or a major component— such as an engine—you’d like to de-rust without disassembly, SRR is a smart way to go. Also, Ultra One’s Heavy Duty Degreaser is convenient for prepping seriously dirty parts for the procedure.