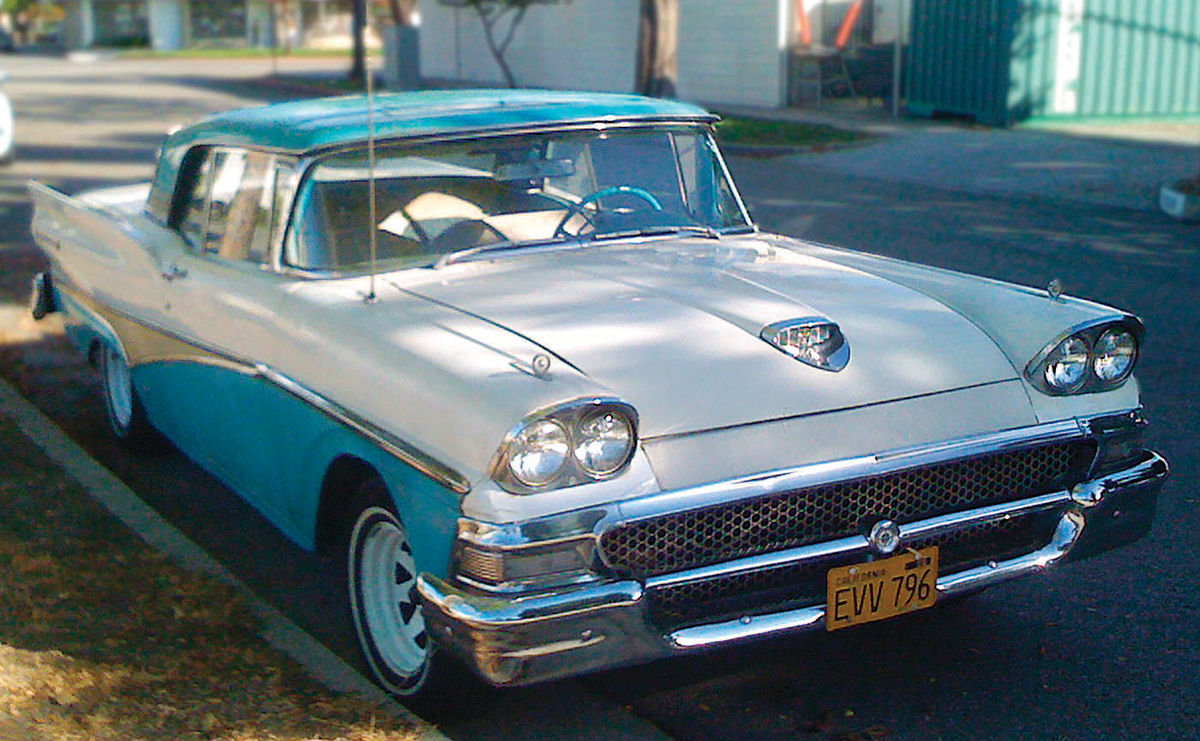 A Number of Our Readers Took Sunday Drives...Years Ago. And There Are More Thoughts on “Roadsters vs. Convertibles.”

Sunday Drives with the Family

Editor’s note: Our April Rearview Mirror, titled “No Particular Place to Go,” spoke to the Sunday drive of decades ago and how cars, roads, urban areas and families themselves have changed to all but preclude that simple pleasure. As it turned out, I wasn’t the only one with memories of that former tradition, as these letters demonstrate.

Ted, just wanted to tell you how much I enjoyed your Rearview Mirror column this month. It brought back memories of when my parents would pack a picnic lunch and pile us into the back of our 1967 Dodge Polara station wagon and just drive until we saw someplace (often a roadside picnic table), eat lunch and then head back home. I loved it.

Before we had kids my wife and I would often take road trips, but with all the activities kids are involved in, often on the weekends, it’s hard to plan these kinds of outings. Even so, we do take a couple of good road trips every year. But while we refuse to have any sort of DVD player in the car, it’s hard to stop the kids from using their iPods.

But when I travel I often take roads other than the Interstates, and then I make them look out the window when we pass through an old town so they can see how cool the old houses and buildings are.

Anyway, just wanted to say you wrote a great column and I thoroughly enjoy your magazine.

Thanks for the note on your experiences and the kind words. You can’t tell now, but having the kids look out the windows from time to time may plant a seed that someday will turn them into back roads drivers themselves.

Just a short note to tell you that your “Rearview Mirror” piece in the April issue put me in the front seat with my grandpa & grandma taking a Sunday drive from home in Kingston, New York, to Ellenville (I think) and a stop for an ice cream cone.

I was around 10 or 11, the car was a 1949 Plymouth, all the windows were rolled down to “beat the heat,” and I still can smell the new car smell and feel the fabulous sponge rubber seats. Thanks for bringing the memories back.

Ted, Boy I have to say you triggered some childhood memories with your editorial on Sunday drives.

That was routine in our family as far back as I can remember…1958 and beyond. We lived in Massachusetts and that Sunday drive took place often. We had our big meal of the day for lunch on Sundays. Once the dishes were done we often piled into the car for a Sunday drive. Usually only on sunny days. Quite often it was just a short ride with a stop at the ice cream place and back home.

But while we refuse to have any sort of DVD player in the car, it’s hard to stop the kids from using their iPods.

Sometimes my dad would announce “let’s go to the country.” That meant to Granddad’s house in southern New Hampshire. That was about a three hour ride. We’d get on the 128 which ran around the west side of Boston and connect with the 3 where the little green house was and head toward Milford, New Hampshire. I-93 didn’t exist yet. We usually would stop in Milford so Mom could check out what was for sale in the White Elephant Store. Used stuff and antiques. After that we’d head north for Mont Vernon where Granddad lived. We’d stay a couple of hours and head home, often in the dark.

We’d also, at least twice a year, take a day trip up to Franconia Notch to see The Old Man of the Mountain, which sadly fell off the mountain in 2003. (The Old Man of the Mountain, also known as the Great Stone Face or the Profile, was a series of rock formations that appeared to be the jagged profile of a face. Weathering over time eventually caused it to collapse.)

My first memory of these “rides” were in the 1954 Chevy Bel Air station wagon, then the ’59 Parkwood until that was replaced with the black with red interior ’63 Bel Air sedan. By the time the ’66 Bel Air wagon was on the scene those Sunday rides were getting few and far between. Us kids were all teenagers by then with my older brother and sister having graduated from high school. But by this time my Dad had a 1949 Jeepster as a second car and occasionally we’d get a ride in that on a Sunday for a slow drive for ice cream or to Mont Vernon for a quick visit.

Those were great memories and a tradition my wife and I did not continue with our twins. I’m not sure why as my wife’s family did the same on Sundays. I don’t have grandkids so I don’t think I’ll pick it up again but now I’m often on the road on weekends for car shows.

For those folks living in New England who haven’t done so, please make a point to take a Sunday drive on the Kangamangus Highway in New Hampshire. It runs from Conway on the east end to Lincoln on the west end. It’s a beautiful scenic drive.

Thanks for the memories.

More Regarding Roadsters vs. Convertibles

The question in your April issue from another 74-year-old gearhead regarded the definition of convertible and roadster, and the difference between the two.

I have owned both and my definition is that a roadster is a two-seat soft top; a convertible is a soft top but has room for four or five adult passengers.

Regards and keep up your much-enjoyed terrific effort.

The opening discussion in the April Special Report attempts to define the difference between a “Roadster” and a “Convertible.” Perhaps ironically, the example and image used in the article is a 1958 Chevrolet Corvette. (Or is it a 1959? Hard to tell without a clear view of the deck lid which had chrome trim on the 1958 model only.)

I say “ironically” because the Corvette began life in 1953 as a true Roadster, having only side curtains for windows and lacking such amenities as exterior door handles or a radio, among other things. I believe it was the 1955 model that introduced roll-up windows, thus making the car a “Convertible” by your definition. This may have contributed to the blurring of the line between the two definitions. In closing, I have used “two seat convertible” as my definition of a “Roadster,” which I now affectionately apply to my 2007 Mazda Miata!

Actually, the car in the photo is a 1960 Corvette which on the outside is much like the ’59 model. In addition to the removal of the chrome strips from the rear deck lid for ’59, another difference between the 1958 and 1959 Corvettes is that the ’58 Vette has faux louvers on the hood. They were gone in ’59. Yes, we used the image of a Corvette because of its transformation over the years and as noted above, roll-up windows debuted on the Corvette in 1956.

Your recent article “A Vintage Vehicle as a Daily Driver” served notice that perhaps I tend to take for granted my daily-driver vehicle, a 1958 Ford Skyliner. The car was an eBay purchase about six years ago, and since it apparently lived its entire life in Ohio, it’s a candidate for some meaningful bodywork. Luckily, for some reason the previous owner parked it for good in 1964, so the road salt didn’t have a chance to eat away everything.

Several years ago I went through all the mechanicals and made sure things were up to spec, since this car has to get me safely to and from work. It’s not modified in any way, still clocking its ever-increasing mileage on the original 332 FE-series motor and Ford-O-Matic transmission. No power steering, no power brakes, vacuum wipers and an entertainment system consisting of the original AM radio.

Long-distance drives are dreamy, with the living-room pillow-soft ride that defines most ’50s cars. At 15 mpg on the highway, I’m still in the neighborhood of some 50-years-newer trucks, SUVs and family haulers. Even the Skyliner’s overall length is still in keeping with some of today’s oafish truck-based guzzlers, so finding parking spots isn’t usually as difficult as one might think.

While my daily commute isn’t far by Southern California standards, I’ll admit to being amused when I read articles that quote some vintage car owners as mouthing such phrases as, “I wouldn’t hesitate to drive her 50 miles to a car show.” Why, that’s barely getting the motor warmed up!

This past weekend my wife and I jumped into the Ford’s cushy bench seat and took a trip into the Mojave Desert for a little rock-hunting adventure, a roundtrip distance of over 200 miles. The Skyliner may not have been the best vehicle for the few miles of dirt tracks included in the adventure, but it was great worry-free fun. I brought just enough tools for very minor repairs, and along with a couple jugs of vital vehicular fluids and a spare and a jack, we were off and running. Other recent jaunts in the old Ford include a couple roundtrip runs to Fresno, at almost 500 miles each (on those I didn’t even have a spare…whoops!).

I’ve had an unbelievable amount of fuel system issues with cars that don’t get driven much, including stuck tank sending units, rotted rubber hoses and plugged carburetors. These seem to be very recent and very prevalent maladies in my little vintage fleet, and I’m pretty sure modern, less-stable, alcohol-laced fuels are largely to blame. My admittedly anecdotal evidence surrounding today’s gasoline has me pretty well-convinced that the government has stuck us with some truly awful compromises in fuel technology. That said, keeping a vintage vehicle on the road and regularly driven seems to alleviate a lot of those problems, simply because you’re refreshing the fuel supply and not allowing it to sit and degrade.

Sure, your vintage ride as a daily driver usually necessitates getting “regular” insurance, which is a whole lot more costly than a typical collector-car policy. But driving the old beast and collecting endless thumbs-up in your travels is sure a fun way to enjoy the drive. To me, that’s what these cars were built for: to be driven.

Thanks — as always — for a great magazine!

That’s Bruce’s Skyliner at the top of this page. At the time the photo was made, the car was about to be driven to the nearby Disney studios for background use in a Tom Hanks movie.

We’d like to share your vintage driver with the readers as well. So send us a high-resolution image or a good photo and tell us about your ride.