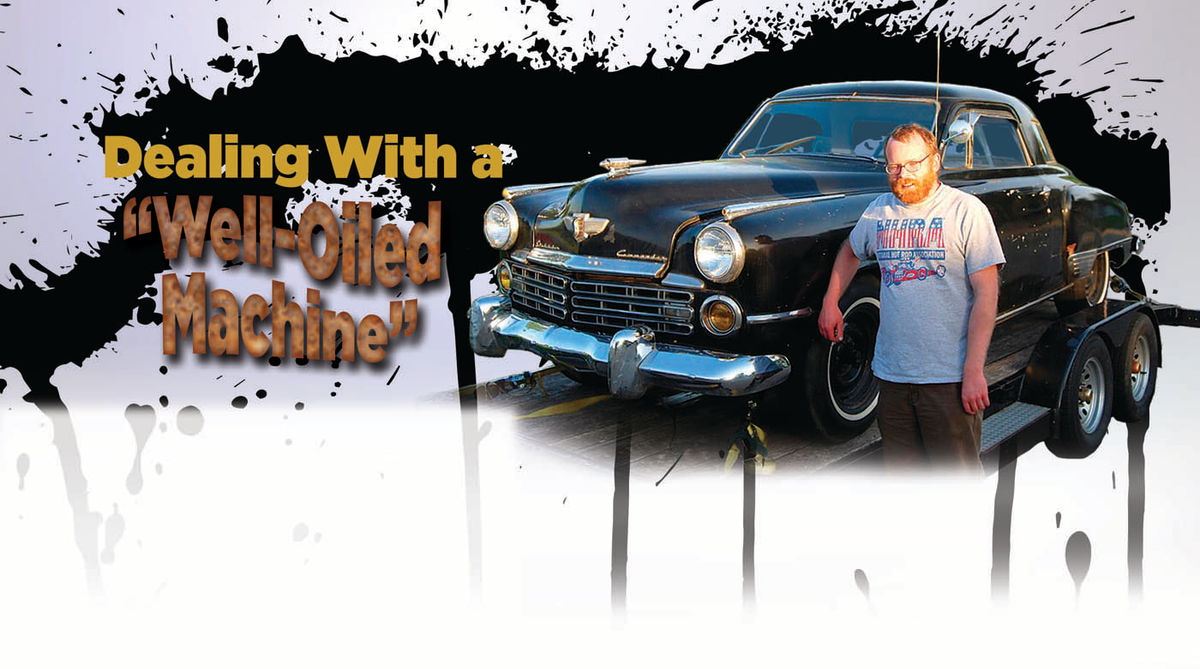 Dealing With a ''Well-Oiled Machine"

The Undersides of Older Cars Often are Coated With Layers of Caked-On Road Crud. That Actually Offered Some Protection, But Now It’s Time to Remove the Stuff. Here’s How…

“Why would you want that car?” asked my friend Jim. “It’s covered with grease and oil underneath. You’re going to be scraping crud off of those frame rails and steering linkages for months. You’ll never make those A arms look good unless you take them off and dip them or blast them and that’s a lot of work!”

Jim was absolutely right. The ’49 Studebaker Commander Starlight Coupe was what you might call a “well-oiled machine.” But he didn’t realize that its grease-caked chassis was one of the things I liked about the car (in addition to its milestone body design, its innovative engineering and its “something different” character). It comes down to this: Where there’s grease, there’s usually solid metal underneath it.

The Cause of Those Crud Coatings

When you look at a car like this Studebaker you realize how much cleaner the cars and roads of today actually are. Think of it. When was the last time you drove down the highway behind a car spewing blue or black smoke from its tailpipe? If you grew up in the ’30s, ’40s or ’50s you saw that type of thing a lot, but it’s rare to see a smoky car today. What made that smoke years ago eventually landed on the ground before rolling tires flung it up against a chassis where it mixed with fluids leaking from the vehicle itself.

My first cars were mid-1950s models that had road draft tubes carrying unburned engine emissions toward the ground. There were no PCV valves or Exhaust Gas Recirculation systems on those cars.

My 1940 Indian motorcycle is even worse. It has a Total Loss lubrication system that constantly drips oil on the ground. The S.U. carbs on my MG TD have overflow pipes that do the same thing with excess gasoline. We lived with such things until the ’60s.

Do you have any doubts that this is why cars like the Studebaker collected so much road crud on their bottom sides? If you work on cars a lot, you know there’s a distinct difference between the undercar condition of a vehicle manufactured through the ’60s versus a ’70s, ’80s or newer car. Lift the hood on one of these newer cars and all you might find is a kind of greasy, dry dust on the engine and chassis. You rarely see the caked-on junk that coated these parts several decades ago.

My theory is that as anti-pollution systems were phased in the roads themselves got cleaner. It didn’t happen immediately after PCV valves became mandatory, but little by little the evertightening emissions requirements gave cars cleaner roads to drive on. However, a negative consequence of this change was the development of more undercar rust because there was less grease and oil on chassis to fend off the tin worm. That’s why you see ’60s cars and muscle cars with good-looking outer sheet metal…but totally rusted-out frames and no floor pans.

The good thing about a greasy chassis is that the caked-on crud on the bottom of your old car keeps moisture and grease away from chassis parts that were originally left unfinished or that got scratched and therefore became susceptible to rust because the factory paint barrier was compromised.

Some years ago we decided to clean up the chassis of a “survivor” ’36 Pontiac sedan that we owned. The car had a Dubonnet-type “open knee-action” front suspension as used on Chevrolets and Pontiacs for several years. This system was known for being a great suspension when it was new, but a problem child when the oil inside the Dubonnet units started leaking out.

The units were sealed with lead washers and the washers would “squish” when tightened up. Eventually, the units would start leaking and then the front end of the car would bounce wildly up and down. This action would eventually wear out the parts. No wonder the open knee-action concept was first replaced by a “closed knee-action” (lever shock) system in the ’40s and eventually by the conventional coil spring front suspension with “airplane” type shocks.

The Dubonnet units on our car leaked like sieves and the oil drips added to an impressive build-up of road grime everywhere you looked. We chiseled a lot of the buildup off the car with screwdrivers and paint scrapers, but it seemed impossible to really clean things up until we happened upon a spray-on solution that cut through grease like there was no tomorrow. This was sold at Fleet Farm stores around central Wisconsin and we have never come across anything quite like it. When you sprayed it on a chassis part, the grease ran off as a liquid and where the spray hit the part it immediately became bare metal.

Needless to say, this aerosol spray product is not available today and is not ever coming back on a store shelf. We thought that its efficiency outweighed its hazards. After all, you only had to use a small amount to get the job done. Today you wind up using massive amounts of “green” products that don’t cut grease as well. But there’s no use crying, since the stuff is gone forever, period.

We have tried a variety of grease removal products (and tools) in more recent years. Eastwood’s Undergone, which is made for removing undercoating, is pretty good. Some of the “orange citrus” sprays work a little bit. An air tool called a Needle Scaler can be helpful in some cases, but vibrates like crazy, make lots of noise and needs constant lubrication when in use.

When the Studebaker project came along, we wondered if there wasn’t some good information about cleaning a greasy chassis on the Internet. After running through a bunch of advertisements and other useless information, we came across a posting that read:

“These are expensive solutions. Another is a bit messy, but still rather harmless from my experience. You can spray the entire chassis with cooking oil, regular vegetable cooking oil! It will penetrate and soften up the tar or grease. We use it on our hands when we penetrate a roof and tar and cloth the gaps in the penetration. If you smear it around it will actually work instantly.

“We also use Karnak Orange cleaner when really old dried tar gets on our tools. It’s powerful and also rather harmless. They have it at Home Depot. This stuff is awesome for removing road grime on cars and trucks, but it’s expensive.

“I learned the vegetable oil trick from Spanish roofers. One day, we were working on the same building and they were just getting off the roof and they were covered in tar. I was kind of laughing to myself, thinking: ‘Wow, they will never get clean.’ Three minutes later, I saw one of them all clean. So I asked them what they were using and they said vegetable oil. I had to go over and see it to believe it. Sure enough, regular store brand vegetable oil.”

After reading that post, we were anxious to try his suggestion on the ’49 Studebaker. We purchased a gallon jug of Great Value vegetable oil at Walmart for $6 and also bought a cheap plastic spray bottle to use as an applicator. Instead of going in the kitchen cupboard, the cooking oil went out to the garage where the car was raised on a four-post lift.

Although it seems almost illogical, the vegetable oil does cut through grease rather easily and quickly. It seems to start working as soon as you spray it on…you actually will hear the vegetable oil and grease begin to drip. We had the floor covered with plastic, so the drips didn’t create any big problems. You just have to avoid stepping in the really dirty stuff so you don’t track it around the shop and into the house later.

With the amount of crud on the Studebaker, the vegetable oil worked very well. After you spray it on an area, any normal coatings of grease will clean up with a light scraping or a rag. Dried, cakedon crud may require a few applications. The vegetable oil is slippery, of course, and has its own odor, although it is not noxious. Wearing gloves is a good idea, but we didn’t at first and had no problems. In fact, the vegetable oil made it easier to clean our hands.

Once It’s Clean, Protect the Surface

So, if you’re faced with the job of cleaning the chassis of a car that was driven during the “dirty roads” era, you can hope that it is a “well-oiled machine” that has little rust underneath the crud because the grease and dirt protected it from moisture. You can then turn it into a “well-oiled machine” of a different type by using vegetable oil to remove the road debris buildup.

Keep in mind that after you have it all cleaned up, you’ll be driving the car on cleaner roads. With the limited use that collector cars get, you may not see the crud buildup that happened in the good old days, so your chassis may have less moisture protection. You’ll want to be sure to protect it with paint or one of the modern anti-rust products or by having it powder coated if you’re doing a body off frame restoration.

Dealing With a ''Well-Oiled Machine"

Is It “Goodbye” to Pontiac?