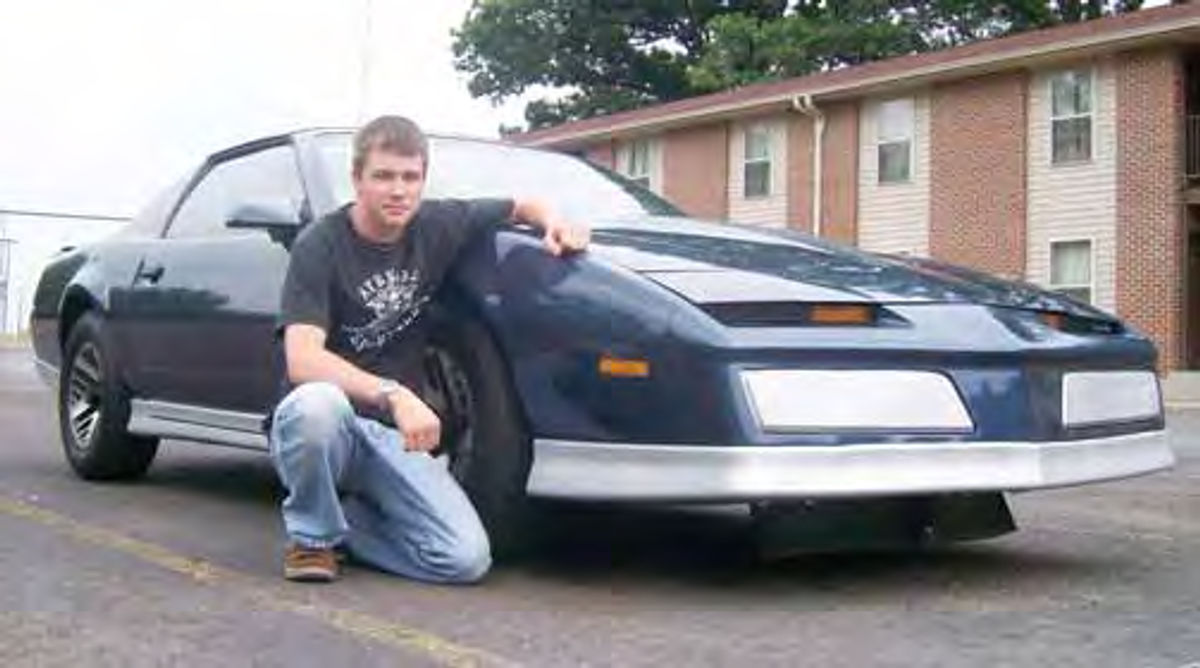 This 19-Year-Old Restorer Is Rightfully Proud of His ’84 Trans Am. He’s Come a Long Way Since He First “Helped” His Dad.

Editor’s note: In an effort to get more young people involved in the vintage vehicle hobby, Auto Restorer has introduced its GU30—Gearheads Under 30—program.

We’re inviting young restorers to tell us about their projects, and if we feature them in the publication they’ll receive a two-year subscription to AR.

So here’s our first GU30, and we’ll be featuring more young restorers on these pages in the months ahead. For more on the program, see the notice at the bottom of page 11.

MY NAME IS Carl Feeny and I’m from Charlotte, Michigan. I’m 19 years old and the proud owner of a 1984 Pontiac Trans Am—my own restoration project car.

I started working on old cars when I was just two years old when my dad (Paul Feeny) gave me a piece of 80-grit sandpaper and told me to sand on the quarter panel of his 1965 Corvair.

It was a bad idea to teach me how to sand at such a young age because at three years old I found a piece of 80-grit sandpaper on the shop floor and decided I would help daddy polish his freshly restored 1961 Corvette.

Yeah…that was not approved of. But sorry dad, I was only three and just wasn’t smart enough to know any better.

Getting Started In the Hobby

Since then, I have always helped my dad—in a much more productive way, I might add—in the shop during the winter with his body-off restoration projects. These have included 1952 and 1955 Chevy 1 ⁄2-ton pickups, a 1958 Chevy Biscayne, 1968 Pontiac Firebird, 1942 Ford 8N Tractor, and currently a 1951 Willys Overland pickup.

I have always enjoyed the wide variety of work in the shop whether it is an engine overhaul, body work or the general cleaning up of nuts and bolts and body parts.

It was always the idea of doing something with my hands and seeing a good end result that made me feel like I had accomplished something.

Tracking Down a Project Vehicle

Ever since the age of nine, my goal was to find a 1968 Camaro to restore myself and have done by the time I was 16. That, unfortunately, did not happen.

So as time went on, I just wanted an older vehicle of my own to put all my work into and have something to take to car shows and actually say, “Yeah, that one is mine.”

I knew nothing of what shape it was in, but the car was eight miles from home so I decided, why not go look at it. The car belonged to a friend of a friend’s brother and he was the original owner.

When I heard that the car did not run but had been stored in a garage for 15 years, I was even more interested. I showed up at the guy’s home and he told me to meet him around back by the garage and he would open the door.

Now, I was thinking what everybody else would think when you hear of a car that has sat in a garage for 15 years. I was thinking all flat tires, shoved against the wall with boxes of junk piled on top of it.

Well, in this case, what I found was the complete opposite.

He opened the door and what I saw was a car in the middle of a cement floor with no dust on it, nothing within six feet of it, and it even had air in the tires! I was amazed!

I started looking at the car, noticing it had plenty of rust around the wheel wells and side skirting. He told me the car had overheated and he just parked it and never did anything with it after that.

The interior was the upside of the car; it was very clean and I could see it needed very little attention.

I was very interested at this point so I asked the famous automotive question: “How much?”

I looked him in the eye and asked if he had the title, and he did.

Working With the Engine

The very next day I picked it up on a trailer and brought it to its new home.

I pulled the dipstick when I got the car home and realized there was coolant mixed in with the oil. This car had sat for 15 years with that in the oil pan!

The next two weeks were spent getting the Trans Am’s 305 V-8 engine flushed and freed up, the old fuel cleaned out of the tank, and I gave it eight fresh spark plugs.

With some patience, I finally got the motor to turn nice and freely. I fired it up and let it run just enough to know where the water leak was and to make sure the motor was going to run. I now knew the leak was in the intake gasket, so I tore the top end of the motor down and gave it a new gasket.

When I got the engine all put together I did a brake job all the way around and put a new set of tires on it as well as a rebuilt carburetor. I drove the car for two weeks as a daily driver, but then I spun cylinder #6’s rod bearing…go figure.

I only had enough money to do a stock overhaul of the engine so that is what I had to do. I just wanted to make the car run.

When I got the motor back together again, I drove it another several weeks, but then I was having fuel delivery problems. I was going through a fuel filter every 600 miles! With the help of my dad, we pulled the fuel tank and pulled out the pickup unit. The pickup unit looked like stalactites in a cave and the gasoline in the tank was orange. In addition, the tank was clogged with rust and dirt. We put a new tank in and cleaned out the fuel lines and made the good old blue monster run once again.

Going After the Rust

In early 2008 I decided I had enough money to restore the back half of the car. That’s where I had found most of my rust. I had to rebuild my fender lips and just about everything from the body line down to the pinch weld. That process took me about four weeks to accomplish. When I got that done I stored the car for another month waiting for spring to start. It was in May of 2008 when I had enough money saved up to finish the rest of the car from the doors all the way to the front clip.

But when I brought the car out in the spring, I discovered that when the motor got up to running temperature, the car would lose power and act like it lost three to four cylinders. Sometimes it would even die and I would be unable to start it for five to 10 minutes.

I tried everything that I and others could think of until I came to my last resort. I got rid of the emissions pump, Quadrajet carburetor, electronic spark advance distributor, computer, and the 700 R-4 transmission.

When I deleted the computer from the car, my transmission did not want to shift very well and I lost the overdrive so I pulled it out and bought a 350 turbo with a shift kit and 2200 stall converter for $100…hey, you can’t beat that!

Little did I know at the time that there is a torque converter lock-up kit for the 700 R-4 to bypass the computer controlled shift solenoids.

Anyway, after all that, I was still having the same problem. And yes, in the middle of all that, I did consider vapor lock. I insulated my fuel line from the mechanical fuel pump to the carburetor.I even put a new OEM fuel pump on it to see if my previous new pump was faulty. Both of those ideas did not work.

Some Help From Friends

After all that I talked to some more people about my situation and my dad’s friend, Randy, told me to put a single line fuel pump on the car and get rid of my return line.

I figured, what else do I have to lose? Nothing else has worked.

I took his advice and what do you know…it worked!

I believe the problem I was having was vapor lock. It would run great until everything was up to running temperature, and then I could see my fuel sputtering in my fuel filter right before the carburetor and I did not have a good flow of fuel anymore. I believe it was vapor locking after the mechanical fuel pump on the side of my engine. The pump was sending most of the fuel back through the return line rather than up to the carburetor because fluid takes the path of the least resistance…and in that case, it was my return line. So I got rid of the return line and got a single line fuel pump so there was only one path for the fuel to go.

Ever since then I have not had another problem with it, and I drive it every day! I am currently studying automotive and high-performance technology at the University of Northwestern Ohio in Lima. I drive my Trans Am back and forth from there to Michigan when I need to go home on the weekends.

You may ask, “Is it true that T-tops leak when it rains?” OF COURSE THEY DO! But the funny part is that I managed to get the only third-generation Trans Am that I have seen with an after-market T Top! Oh yes, it’s aftermarket. The seals and the glass from an OEM T-top car do not work on mine.

I have yet to figure out what I have to do to fix that problem.

All that aside though, I love my car, I love driving it and I love it when I drive by people on the street or on the highway and watch their heads turn, because I know what they’re looking at…they’re looking at my car, the one that I spent my time on, the car that I worked my butt off to make it look the way it looks today.

And to me, that’s the greatest feeling in the world!