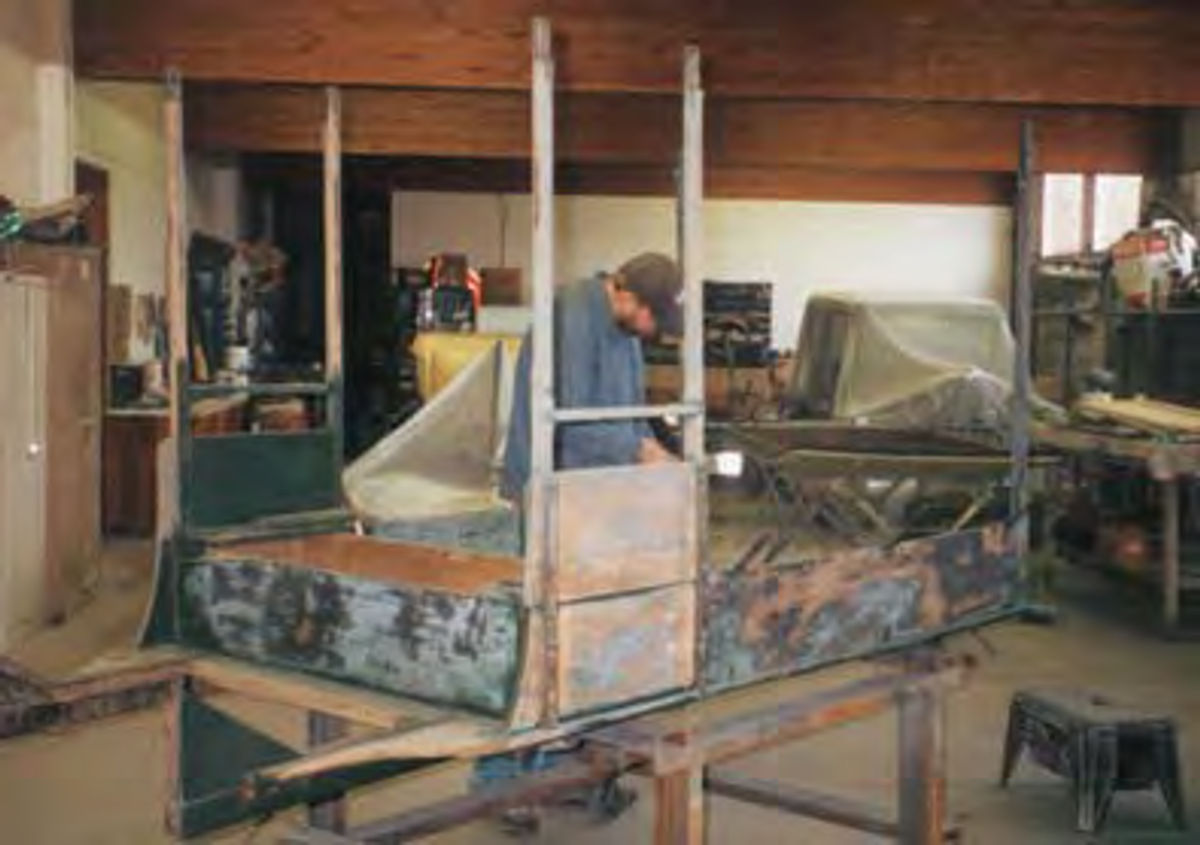 Some 92 Years After It Was Assembled, This Ford Is Back Home. It Also Has a New Job and Is Doing Well.

Editor’s note: This being the centennial of the introduction of Ford’s Model T, we thought it only fitting to end the year with a feature on a Lizzie that still serves a useful purpose some 92 years after its assembly. Although it no longer has to haul people or cargo, this T can now be seen in New York’s Finger Lakes Region southeast of Rochester—in the town where it first hit the road some nine decades ago.

EVERYBODY LIKES A happy ending and the 1916 Ford Model T canopy express now displayed in Geneva, New York, is a case in point.

The truck has come full circle from its initial build in Geneva, ownership by various parties in different parts of the state, and then home again to Geneva for restoration and its current “job” as a greeter at Rose Hill Mansion, a local historic structure built in 1839 and now owned by the Geneva Historical Society.

The T’s restoration proved to be not as difficult as one would expect for a nearly 100-year-old vehicle.

David Teets, owner of Country Valley Collision in Geneva, has restored more than a dozen Ts and this one really caught his eye.

“To find one that had all the original wood was totally unbelievable,” he said. “I’ve never seen one in all my 30 years (of restoring) in such good shape.”

In fact, he didn’t have to replace any parts. The only difficulty he encountered involved restoring the original fenders, as the Historical Society requested.

“They were in pretty rough shape,” he said. “They had a lot of holes and some dents, so we had to section some pieces in there.”

Teets painted the wooden parts of the T in flat black and the fenders glossy black, in keeping with the T’s original appearance. He also reupholstered the four seats and seat backs.

“We checked everything and it really didn’t need a lot mechanically,” Teets said. “There weren’t many miles on it and the man that owned it before took really good care of it.”

Teets disassembled the engine and transmission and put all new bands in the transmission.

Beyond the truck’s connection to Geneva, it stands out because it sports a brass banded radiator, a trait of a 1915 model, and headlights styled like those of the 1915 T; however, this T’s registration states that it’s a 1916 model.

Charles Bauder, a vintage car buff who recently retired from heading the Geneva Historical Society, explained that Ford occasionally used leftover parts on their trucks of this era. Furthermore, he said the seat in the truck bed was an after market addition, but he believes that the leather canopy sides were original.

“I have a photo of a similar vehicle in 1916 and it has those same rolled-up sides so it must’ve come with it,” he said.

The restoration cost approximately $15,000, which the Geneva Historical Society raised through community donations that were boosted, no doubt, by enthusiasm resulting from the vehicle’s close ties to the city.

The Ford assembly plant in nearby Buffalo, New York, built the T’s chassis. The Geneva Wagon Co. purchased the chassis and built a wooden body for it.

“They would build them per the customer’s request,” Teets said. “When it came from the factory, it was fenders, hood, frame and the engine and transmission. There was no body of any sort.”

After installing the mostly wooden body, Geneva Wagon sold it to a local family, the Hutchins, likely for use as a commercial vehicle. The T was handed down within the family for years until they garaged it in 1932. That turn of events helps to explain the truck’s excellent condition—after 16 years of service, no one drove it for nearly 30 years.

In 1960, Charles Mellen, also of Geneva, bought the T at the estate sale of Margaret Hutchins.

Five years after he bought the T, Mellen sold it to his friend and former business associate Warren Hay.

Hay eventually moved out of the area to Haines Falls, New York. He restored the vehicle and enjoyed showing the T in the Hudson Valley and New York City areas. But the T was garaged once again in 1996, where it would sit untouched for 10 years.

In 2006, Hay donated the truck to the Geneva Historical Society because of the T’s link to local history.

“Ordinarily, we wouldn’t accept a large donation like that,” says John Marks, the curator, “but this had such ties to the Geneva area.”

The Historical Society also has a 1913 catalog from the Geneva Wagon Company that advertises their truck bodies. Like many companies’ creations of the era, their truck components are not unlike regular wagon bodies modified slightly for horseless carriages.

In July of this year, the historical society moved the T to Rose Hill Mansion, a National Historic Landmark that is considered to be one of the finest examples of Greek Revival architecture in the United States. In another local connection, Waldo Hutchins, Jr., a member of the family that originally bought the T in 1916, played a major role in the restoration of Rose Hill Mansion in the 1960s. Moreover, Hutchins’ grandfather, Robert Swan, owned the mansion from 1850 to his death in 1890.

So far, in its role as greeter, the T has proven to be an asset to the site in an unexpected way. It seems that the Ford has been a big hit among husbands who otherwise may have been less than excited about touring a historic mansion with their wives.

“The men immediately light up when they see the Model T,” Marks said. “We have 2500 visitors each summer (it’s open to the public from May through October) and we’re hoping that the Model T display will increase that number.”

Visit www.genevahistoricalsociety.com or call to learn more about the T’s new home.