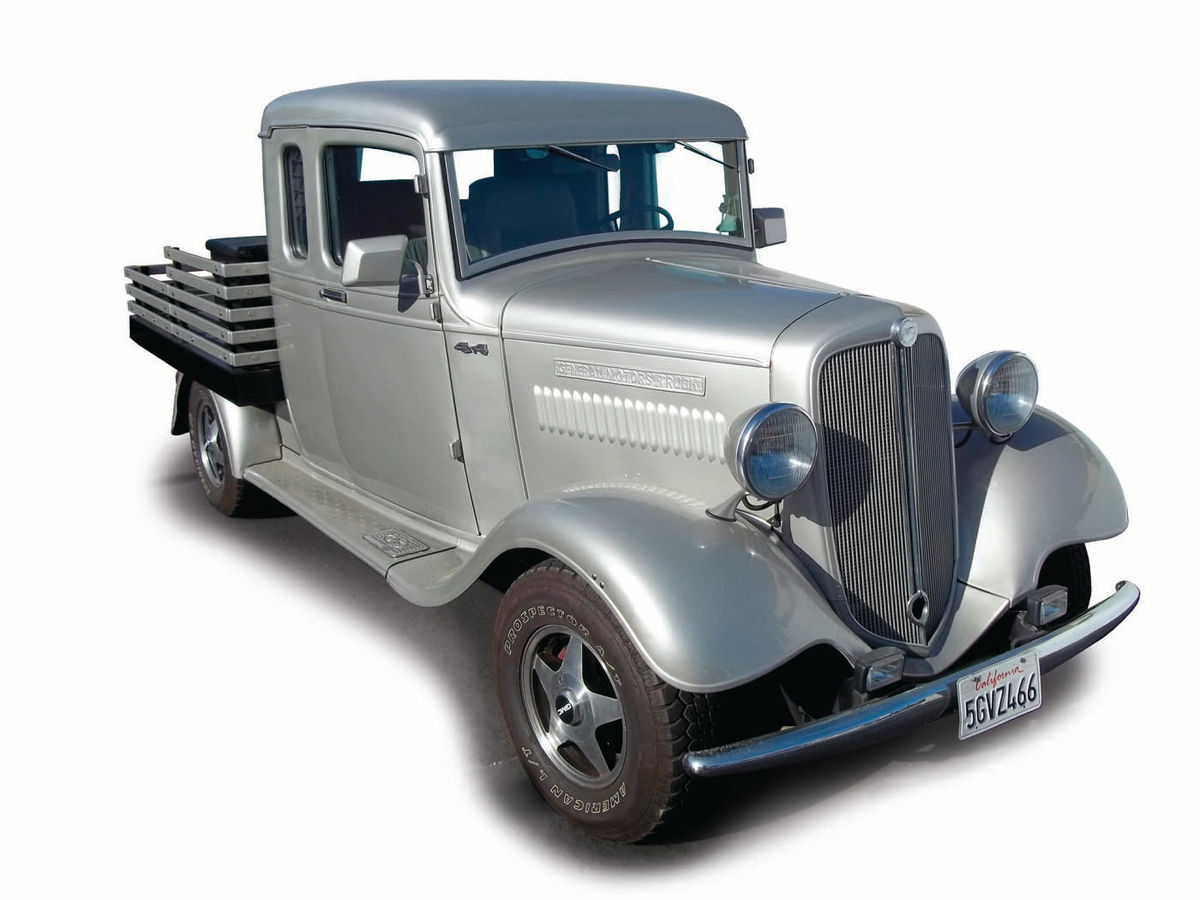 I Needed Something That Would Pull My Trailer and Not Get Stuck When I Went Exploring. Plus I Wanted the Looks of a ’35 Truck. I Knew I’d Have to Build It.

When I decided to retire in 1994, my goal was fulltime RVing. So I loaded up the trailer, hooked it to my Ford dual-wheel and headed out.

After covering some of the U.S., I thought that heading north to Alaska and then afterward going south to Mexico would be fun. What great journeys those would be.

But I needed something new to make those types of trips. During my earlier journeys I had a consistent problem. After I parked the trailer, I’d tour in the truck solo! Well, wouldn’t you know that in traveling the back roads I frequently got stuck either in soft sand or marshlands. I needed to do something different.

That’s when I hit upon the idea of a 4x4 pickup. The problem was that I didn’t want to just buy a newer truck that could handle the job.

In fact, I looked around but found nothing that was what I really wanted.

So I decided to come up with an idea of what I’d like to drive and then try and find that truck. First and obviously, it must be a pickup. It could be a classic but it would need the power to pull my trailer. I was checking around to see what sounded good for me when I found a 1935 GMC pickup in Colorado.

After speaking with the owner, it seemed to be in really bad shape. Still, I drove over to take a look. It was OK and the price was right. Besides, I liked the idea of a 1935 because that’s the year I was born.

Now that I had located and bought the truck, the really big job was ahead. What will I do with this thing to make it right for me?

After some searching, I found a 1985 Chevrolet Blazer 4x4 in a local paper. The body was shot, but it should be OK for my purposes even though it had a bad transmission.

Having the Best of Two Very Different Automotive Worlds

The project started with months of planning with both vehicles in the yard. It was nice to be able to look things over on both vehicles as the plans began to mature.

During this time my wife noticed that the tires on the ’85 were Firestone; the ones that were being recalled then. This was in mid-2000. I checked with the local Firestone dealer and he said to bring them in for an exchange. This effort resulted in four new tires for the ’85 junker. We were off to a great start!

In the meantime, I sat in the ’35 and found that because of my height, 6’ 3”, when sitting behind the steering wheel my knees were up almost to my chin.

Back to the drawing board, so to speak.

But then the plan started to come together quite well. All I had to do was enlarge the cab on the ’35. (Build what’s known as an Extended Cab in today’s market.)

However, after some serious measuring on both the ’85 and the ’35, I determined that, unfortunately, the two vehicles basically were incompatible.

Where There’s a Will…

Here was my solution: start with the ’35 chassis and the ’85 front clip and rear suspension and see what I could pull together.

Things were turning out quite well until I encountered the steering. The ’85 had a steering box, and in order to use the box I’d have to fabricate a big bump on the left front fender of the ’35. That definitely was not a good idea. So I checked around and was told that I shouldn’t even think about trying a rack-and-pinion system that I figured would work without the fender bump.

With more research on my part I found that I could get that steering system to work but the pinion had to be small because of the clearance between the front differential and the chassis. Because of this, I couldn’t have power steering. Well, I guess you can’t have everything.

Things progressed somewhat smoothly, boxing the ’35 chassis so it could handle the stress of a 350 engine and 4x4 activities.

But at this point, I basically had a rolling vehicle without a body.

I then started on the cab extension. It took lots of time and effort but as things go, it turned out OK.

I put ’85 outside handles in the doors along with the inside handles and used the ’85 power tinted windows and door locks. I also used the ’85 steering column, dash gauges and most anything else I could think of.

The cab extension was another challenge. I found another ’35, a bigger 1 1/2-ton truck. Using the doors to handle the extended windows and the top gave me the length I needed.

With the tilt steering column and modified dash of the ’85, things were coming together quite well.

I installed a 1992 350 V-8 with a 4L60 transmission hooked to the transfer case in the drive line. Because of the bigger engine, a larger radiator was needed. A Walker unit fit really well and still had room for a trans cooler (walkerradiatorworks.com).

The flatbed came together after a local steel supply did all the bending. The rear fenders were too narrow to allow for the 235R15 tires. Adding a 1½-inch metal spacer in each fender solved that problem.

Inside I have adjustable bucket seats with armrests, a dome light and under-dash lights, a multi-speed heater, turn signals, dual-speed wipers and cruise control.

By this time, several years had passed, (interesting that when you’re having fun, time truly does fly).

With a lot of body work, using lead and plastic filler plus sanding and priming it was time to license. I did that in June of ’08.

We’re Back on the Road

The truck handles fine, even when pulling the 17-foot trailer. The mpg is not as good as I thought it would be. But then consider that it has a 350 motor and a low gear ratio, 4.11, and then there’s the truck’s substantial weight. Besides, it has the aerodynamics of a brick! Given its size, it sure would be nice to have that power steering, but all things considered, it’s OK.

All in all, it’s been an exciting project. It kept me out of my better half’s hair for more than eight years. I know I’ve jumped a bunch of stuff in this report; however, it would keep me punching these keys for weeks to describe all the fun I’ve had.

Eight years later, everything seems good. All I’ve needed has been general maintenance to keep it running! I enjoy this truck and pulling the camping trailer. So far, I haven’t been stuck anywhere with my GMC 4x4. I don’t get out as much as I used to, but that is to be expected with passing time.

What a great project…fun all the way through. And now, what a joy to drive around both on streets and campgrounds.