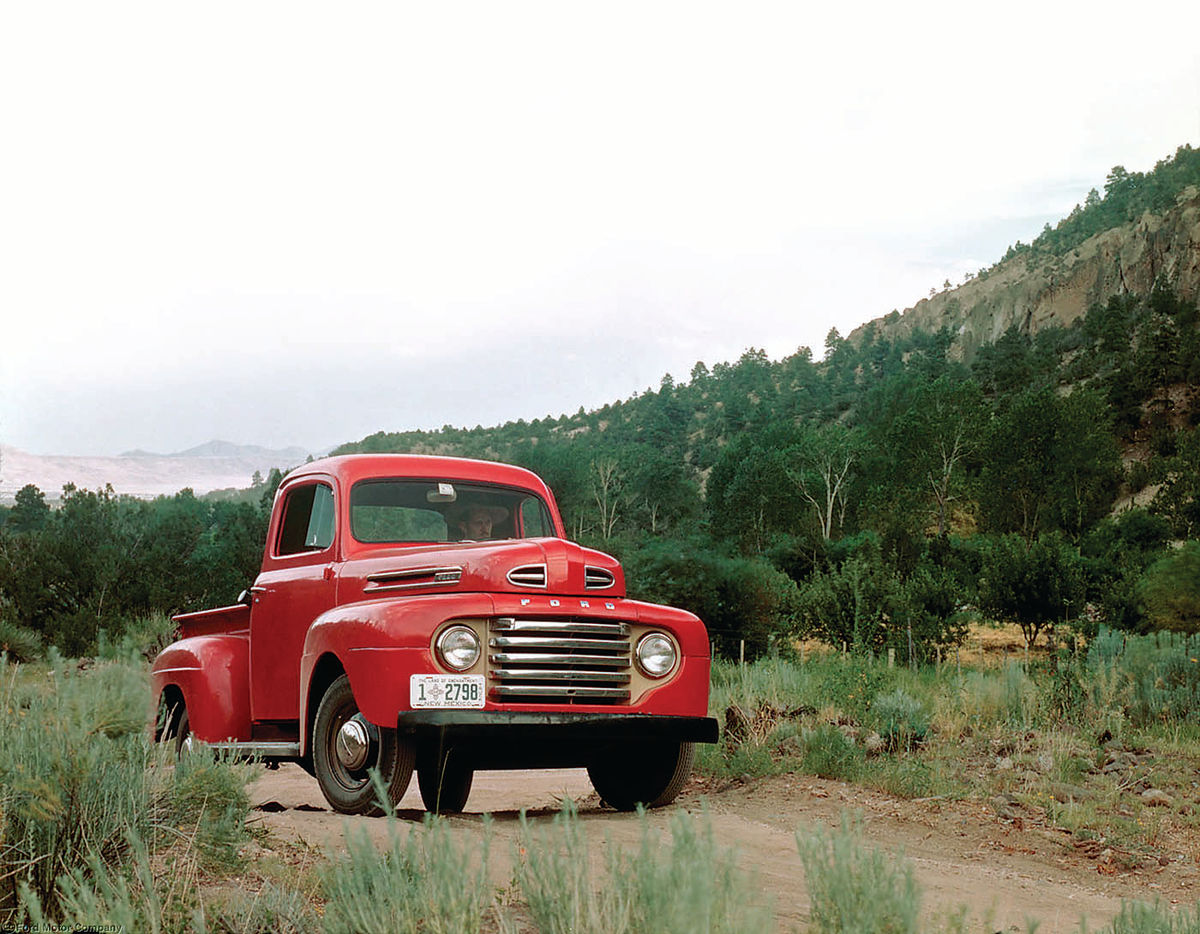 THIS MARKS THE 65th anniversary of the introduction of the 1948 line of Ford Trucks, heralded by the automaker as “The First New Post-War Products of the Ford Motor Company.” Included in that product line was the F-1 pickup, the first in the popular F-series of trucks that has continued to this day and repeatedly has been among the best-selling vehicles in the nation.

To commemorate this occasion, we thought we would let Ford Motor speak to the attributes of these trucks through the press packet that was released to the media when the trucks first entered dealer showrooms some six-and-a-half decades ago. The release date on the press material is January 16, 1948, so we don’t have to be concerned about jumping the company’s embargo on the following information:

A new line of Ford trucks is being shown to the public for the first time today by Ford Motor Company dealers throughout the nation. The streamlined 1948 models, completely new from the wheels up, represent the first post-war product of Ford.

J.D. Ball, director of the truck and fleet sales department, said the new trucks are notable for an unprecedented range of models and capacities as well as many engineering changes.

Driver comfort and efficiency were among the primary considerations of engineers and designers who created the 1948 trucks.

Cabs for the new trucks have been redesigned to assure living room comfort. They provide seven inches’ greater width as well as increased headroom. The door opening has been moved forward three inches, providing greater clearance for entering and leaving the cab.

The doors extend well below the floor and are weather-sealed for protection against moisture, dust and drafts. Interior and exterior hardware is more rugged.

A one-piece windshield which is two inches higher gives drivers clearer vision forward. The rear window has been enlarged to increase visibility.

Seats and cushions give passenger car comfort to driver and helper. The adjustable coach-type seat has individually wrapped coil springs and a rubberized hair pad. The cabs also have a large ashtray, dispatch box and sun visor. Provision for radio installation includes a grille opening in the instrument panel.

The new trucks are attractively styled without losing ruggedness necessary for good performance and long life. The radiator grille and headlights are recessed in a functional pattern in the modern front end which contributes to a massive appearance and gives added protection.

Greater front end strength has been achieved through improved sheet metal suspension and heavier construction. Fenders are heavier, wider and of a new design which provides greater tire clearance. Another design advancement is a heavy channel-steel front bumper attached directly to extended frame side rails. The bumper is, in effect, an extra cross member, providing greater rigidity and impact strength.

Three new power plants have been announced for the 1948 trucks. These engines are the Rouge 226, a completely new six-cylinder, 95-horsepower engine; the Rouge 239, an improved V-8 100-horsepower engine, and the Rouge 337, a new heavy duty V-8 power plant developing more than 145 horsepower for the largest trucks ever built by Ford. (Those are the F-7 and F-8, two new series that have maximum gross vehicle weights of 19,000 and 21,500 pounds, respectively.)

A feature of the new Ford six-cylinder engine is the aluminum alloy pistons which are longer and plated to resist wear. The compression ratio, 6.8 to 1, produces more power and a new high lift camshaft opens valves wider and faster, resulting in more efficient intake and exhaust.

The 100-horsepower V-8 engine now has accessories conveniently grouped on top for easy servicing as well as many other new features.

Features of the 145-horsepower V-8 include hydraulic valve lifters which automatically compensate for valve wear and ensure quiet operation.

Sili chrome exhaust valves are faced with one of the toughest metals known.