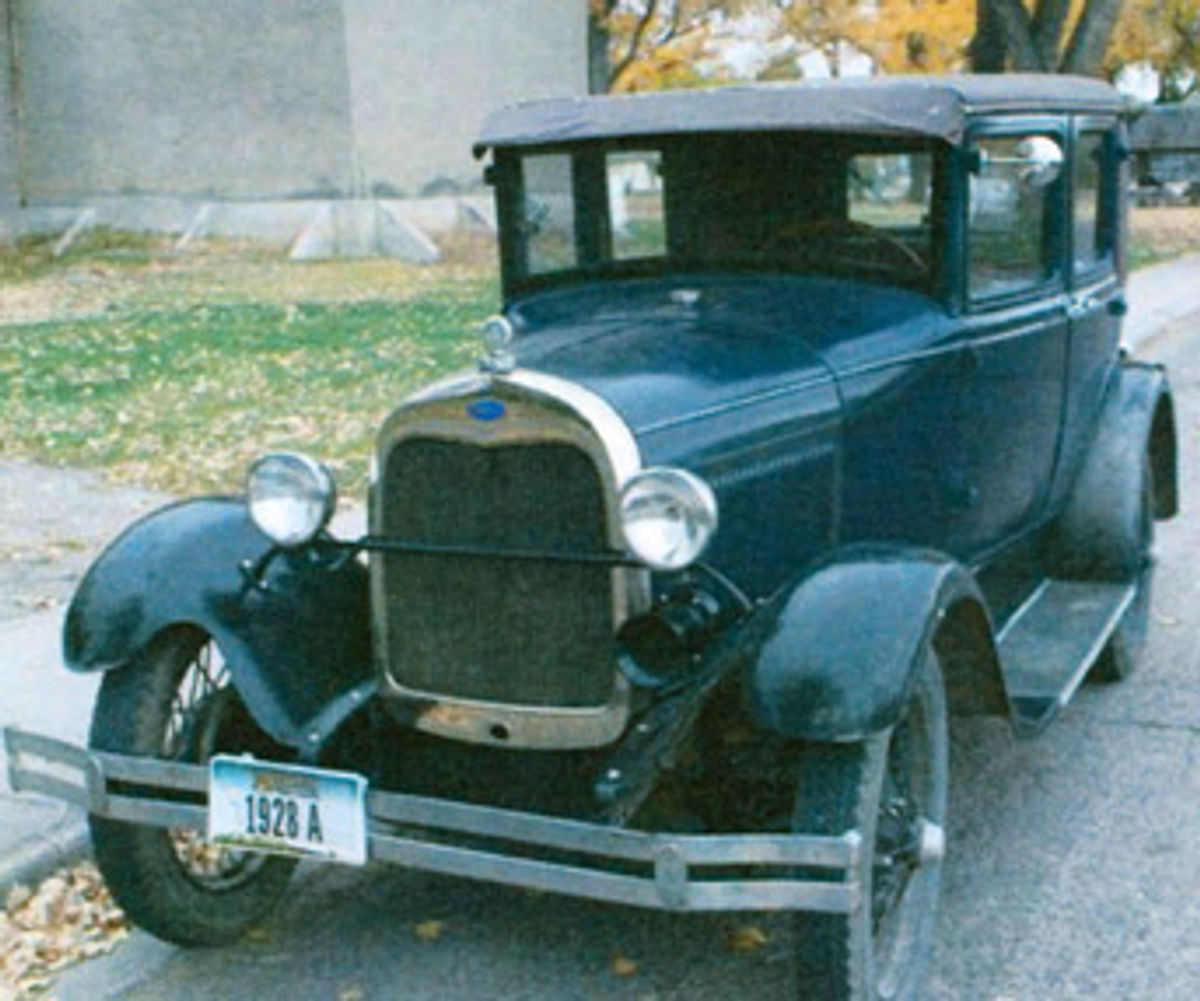 He’d Wanted One Since They Were Everywhere.

BY WAY OF introduction, I am 81 and have been an old car enthusiast for about 75 of those years. It started when I wished I had any kind of wheels as a youngster—which was at a time when lots of Model As plied our roads. Oh, how I craved one of them.

Learning With a Generator

I spent my youth on a ranch near Glacier National Park in northwest Montana. My granddad, who owned the ranch, could do anything with a horse or a rope but was stymied at anything mechanical beyond turning a key on an automobile.

We had a 32-volt generator for lights and water. The 16 batteries backing up the generator were supposed to just need occasional charging but with a big family house, a cook house and a bunk house with a half-dozen men, the power drain was always at a maximum. That little old two-cylinder plant huffed and puffed all day long and by the time I was 10, granddad would encourage me to try fixing it. It was 100 miles to a competent mechanic, so he would say, “It isn’t working now, Sonny, so you can’t really hurt it.” By the time I was 12, I was re-ringing it, grinding the valves with valve grinding compound, a small suction cup on the valve head and a stick to spin it. I also was tending to points and carbs on various ranch vehicles and tuning up the Hart Parr 18-36 two-cylinder tractor.

Those days only rich folks went to doctors or took their cars to shops. Baling wire, better known as Montana Buckskin, and used parts were the norm.

From Ranching to Farm Machines

After an unsuccessful try at sheep farming and a highly successful turn as a salesman at a farm equipment store, I opened a Case Farm Dealership here in Fort Benton, Montana. For 20 years I fixed new and old Case machines, some by the book and more than some by ignoring the book. With time, the machines got too big and too expensive so I found a way to get out of the business with a whole hide…and I ran.

Drawn to an Auction

It was 1980, I was 50 years old, no longer working and I had a 5000-square- foot shop building, a magnificent tool collection and time on my hands. A collection of Ford Model Ts and As came up for auction and I recalled my craving for a Model A. At the sale I wound up with two cars.

One of my purchases was a “Depression Pickup.” This one had the back seat portion of a two-door sedan hack-sawed out and the back end of the body attached to what was left of the front section. A few boards for a box and there you have it, the original F-100. There was little of use to me in the pickup but the state agriculture museum craved it so I donated it to them and they’ve given it excellent exposure.

I knew little about Model As other than they had a tinny ring in the exhaust and I wanted one. At the sale, beat-up coupes with a rumble seat were bringing $4000 and up. Late in the day my four-door came up and I got it for about $1100. The top had fallen onto the seats and doors hung open. Some wheels had rubber— none had air.

At the time, I had no idea exactly what I had bought other than it said Ford here and there and it was a shambles. As it turned out, it is a 1928 Brown Leather Back, Briggs Body Sedan, Model 60-A. They were first built in May of 1928; mine has a stamping on the firewall saying 10- 28-28. She beats my age by two years!

I got a reproduction brown top from LeBaron Bonney way back in Massachusetts (lebaronbonney.com). The early As had a red steeringwheel, including mine. It’s said that Ford changed to black as the red dye wiped off on shirt fronts of gentlemen with pot bellies. The replacement red one I have does not mark my pot belly.

Building One for the Road

I had the time and the facilities so I tore the car down to a bare frame and started over. I put myself under a bit of pressure as my golfing buddy suggested I would never get it running. I had bought it in 1980 and we wound up with a bet to drive it to dinner in Great Falls (40 miles) on April 1, 1981. The wife and I got free dinners out of that one.

I found the seat covers and matching material for door panels and the interior at JC Whitney (jcwhitney.com). Our local shoemaker did a fine job of sewing the material on for the door panels with the filigree and storage pockets.

I went cheap and painted anything need- ing chrome with spray-can paint. It doesn’t have the sparkle, but it looks OK and has survived 30 years without deteriorating.

With time I came to believe you could make a whole darn car like this with reproduction parts. Engines, transmissions and rear ends are all available. I bought brake linings and a $10 riveting gadget and relined the brakes. I can’t speak too highly of Bert’s Model A Center in Denver. Excellent parts and excellent service (modelastore.com).

I went to an old car show where a gent had a “restored” Model A engine for sale—it was late in the day and he was in a dickering mood. I bought the engine for $500, not the $800 he was asking.

But then I learned that it couldn’t even be turned over with a pipe wrench and it had a cracked head. It had new parts in it but the machining was too tight and the babbit needed some scraping. No problem—I tore it down, honed the cylinders, fit the rod bearings and used the head from the old engine…and now I have a perfectly good unit. It uses not a drop of oil and starts like Milt Webb says it should in his Auto Restorer Model A series (July-September 2010).

It also took 30 years and Milt Webb’s advice on brakes to get the old girl to stop properly.

In the past, you nearly had to drag your feet to help it stop. Now you actually can make a person’s head jerk if you brake hard! I couldn’t believe two brake rods were too long and a short one was too short.

Working With the Body

From the days of wagons to all the early cars, bodies were built around good old solid oak. However, most of the oak in my car was rotten.

So I sawed and routed and drilled and glued and screwed many pieces together and eventually it took shape and looked like a car again.

As for the sheet metal, there were some dings here and there but I set out on this project to build a road car and not a showpiece, so I left them in place.

I used lacquer primer first and then dark blue lacquer on the body and black on the fenders. Now, 31 years later, I must admit that I find no chips or cracks. I also bought one of those little bottle stripers from JC Whitney. It looks great if you don’t get too close.

It’s reported that Ford’s suppliers were required to ship parts in wooden crates of specific dimensions. Ford then used the crates as floor boards for the front end of the cabin—the back floor is steel. That was a magnificent savings for the company. I had a beautiful 16-foot spruce board left over from a new Case combine so I used that for my replacement floor.

My car had a cabin heater consisting of a two-foot cube box over the muffler. It had a flex-pipe with funnel behind the engine fan for forced air and a square 4x4” tube up to the floor. It seemed pretty good so I reinstalled it. But the exhaust was so hot it started to burn the floor board. The car now sports a cast aluminum heater box over the manifold.

I suppose all the cars in those days leaked oil. My Ford’s transmission actually had a hole on the back. It didn’t leak a lot but it left a puddle when parked. Bert’s Model A Store had a fix: it was a 2x1x1⁄2” drilled chunk of steel that took a little grinding and bolted into place. It works great!

My perennial and unsolved problem is with the steering—the early sector is a total pain. You can’t buy the seven-tooth shaft machined to fit. The catalog says, “requires some filing to get a perfect fit.” I spent days and lots of patience with a Dremel tool going tooth by tooth. It turns tight but there’s still enough slack that I’m not comfortable driving it over 45 mph. Henry Ford solved the problem in 1930 with a two-tooth sector, but that unit is somewhat longer than mine. I’d install a two-tooth if it would fit.

I bought a set of sealed beam lights from the get-go. I like to see where I am going at night—those original lights just warned oncoming traffic that you were there. However, at the time my car had a Powerhouse generator which proved unable to support the high amp head- lights and keep the battery up. I switched to a later model generator and that didn’t do any better. A six-volt alternator actually looks like the Powerhouse unit and provides ample juice for any and all needs.

Granting a Model A Favor

Recently a 92-year-old man came into my office and said that he had a terrible yen to once more ride in a Model A. I offered to let him drive but he declined— he just wanted to go for a ride and listen to the sounds of his youth.