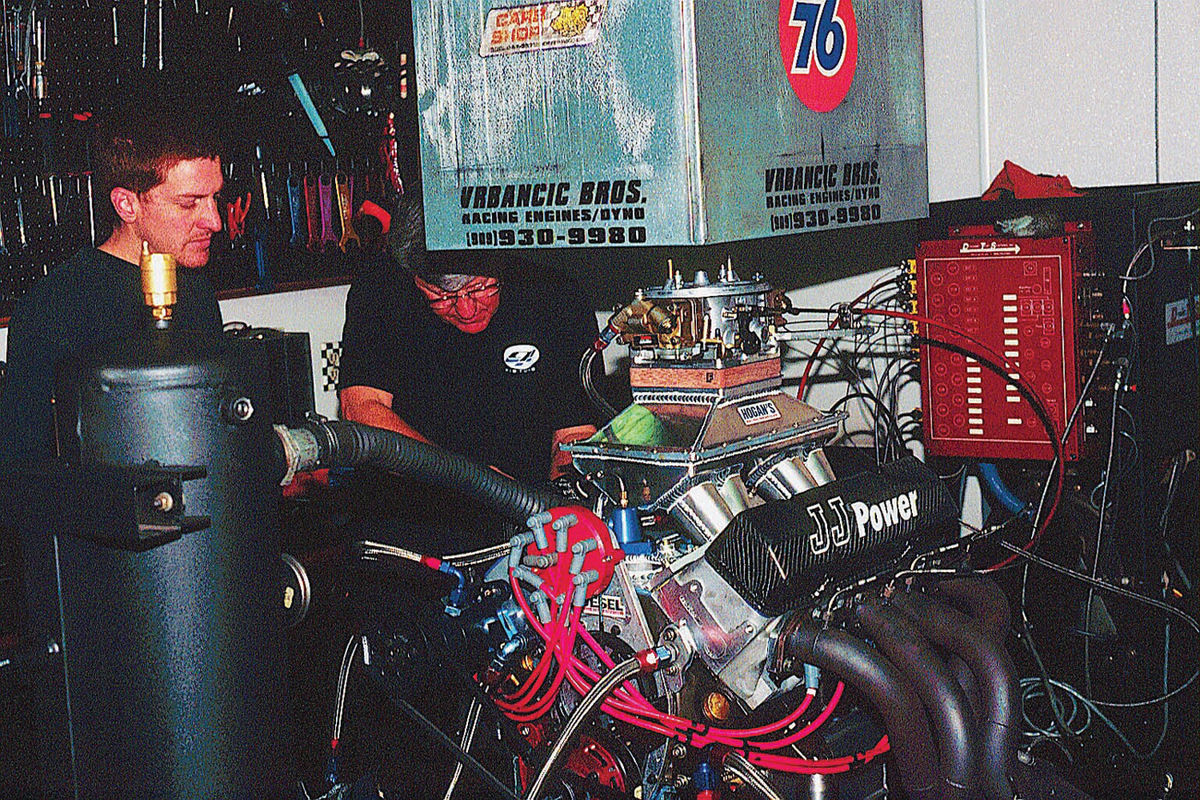 What you can learn from engine and chassis dynamometers

I have built a 383 stroker small-block Chevy V-8 to put in my 1967 Camaro and have added an Isky cam, roller rockers, Scat crank, and Edelbrock Performer intake manifold with a 750 c.f.m. four-barrel and Hedman headers. A friend of mine who builds hot rod engines says I should have it dynamometer tested before I install it. Is that worth the trouble?

Is putting it on an engine dynamometer worth the trouble? The answer is emphatically “yes.” Like lots of aspects of engine building, if you can afford to get your engine dynoed, it’s well worth the $500 a day it might cost to have it done. Here is an excerpt from my book:

First your engine is set in a test jig and its flywheel bolted to a device that looks like a pair of heavy-duty torque converters. Attached to them is a torque arm and strain gauge that measures torque. Horsepower is extrapolated from the torque figures. The engine attempts to overcome the resistance that is in the stators. Water under pressure is used to create the resistance. There are also dynos that use your car’s engine to drive a big electric generator, but they are less common.

Most people think of engine dynamometer testing solely as a way of establishing horsepower, but it can do much more than that. Putting a fresh engine on a dynamometer before installing it is a prudent safety measure because it allows you to break it in correctly, fix any oil leaks, and most importantly, get the timing and carburetion set up exactly as they need to be. And yes, you can do all of that with the engine in the car, but it is much more difficult.

The first few minutes of any engine’s life are critical to its longevity. Lifters can eat up a cam in a hurry if they don’t get a healthy oil supply. And poor ignition timing and a lean mixture can damage a piston in no time if undetected. Lack of oil pressure to bearings, and oil leaks from mating surfaces can be dangerous too, and are hard to spot on an engine installed in a crowded engine bay.

All of these problems are easily remedied on an engine dyno because you can get to everything easily, and you can hook the engine up to sensors that can monitor everything including exhaust gas temperature, rpm, fuel/air mixture and ignition timing. Lambda (oxygen) sensors can also be tied into primary exhaust tubes and tell you which cylinders are running leaner and hotter. And they can be fitted further down near the collector tubes to let you know how the engine is performing overall.

You can also try various components, such as intake manifolds, carbs, headers and even camshafts to see which ones perform best for your needs. For example, you can see first-hand what kind of torque and horsepower a dual-plane manifold makes, versus a single plane at any given rpm, and what kind of power your engine puts out with tri-Y headers versus four-into-one collectors or stock, cast iron manifolds.

A day on the dyno will allow you to tune your engine to its utmost before putting it in your car. Then you won’t have to wait in long lines to make those runs at the strip and then somehow factor in shifting errors, ambient temperature, cold tires and all the other variables that can render your performance figures invalid.

On a dyno, the first moments of life for your new motor will be presided over by trained technicians who have had lots of experience breaking in engines so their cam lobes don’t get galled and their lifters damaged. They will also make sure that oil pressure is up to where it needs to be before they even start the engine, and that the operating temperature is kept within strict parameters once it is running.

In the unlikely event that anything breaks on the dyno, it most likely would have broken anyway, and fixing an engine out of the car is much easier than trying to deal with it once it is installed in the chassis.

Then there are the bragging rights. At the end of the day you’ll have a printout proving exactly what your carefully crafted engine can produce. And you’ll be able to tailor you engine’s performance to your particular ride too. When you set it in the car, you’ll know everything is as it should be, and that it will perform as you intended it to.

If you are interested in testing different cams, an engine dyno is really the way to go because changing cams with the engine in the car is time-consuming and difficult to get right. Of course, you’ll be expected to bring along any components you want to try, and you will also need to bring your own tools. It is unprofessional— not to mention uncool—to borrow tools from the dynamometer shop. Besides, when it comes to custom components, the shop is not likely to have them on hand for you to try.

The ultimate setup for tuning is to have a set of headers with an exhaust gas temperature sensor or an oxygen sensor in them as well—that is unless the dynamometer shop has headers to fit your engine. The Chevy small block is easily the most popular engine to race tune, so they might just have what you need. Exhaust gas temperature can be important because engines make the most power when running very lean–just before they melt down. It is very important that internal temperatures don’t get too high–or too low for that matter.

It may even be possible that your dyno shop could hook up lambda (oxygen) sensors at each exhaust port to really get an accurate picture. These tests aren’t critical unless you are a serious racer because you aren’t going to be seeking ragged edge performance, but if you’re the type that likes to take things to the max, this is one good way to do it. However, for the street, as long as your ignition timing is right all through the advance curve and your carb is set up properly for the secondary’s to kick in when they should, and the mixture is optimum through the rpm range, you’ll be fine.

An engine dyno will tell you what an engine can do in terms of brake horsepower with no accessories hooked up to it. That means no clutch, transmission, driveshaft or differential. But it won’t tell you what your car can do out in the real world because an engine dyno only tests one component: The engine.

To test what an entire car can do, you need a chassis dynamometer. A session on one of them is less expensive than an engine dyno; depending on how much time you spend on it. The average session runs about $100 plus labor for an hour, and can do many of the things an engine dyno can do.

There are two kinds of horsepower figures commonly quoted. The first is brake horsepower, which is what a totally unfettered engine can produce on an engine dyno, and the second is rear wheel horsepower which is less impressive, but more critical to your success on the strip. Accessories such as fans, pulleys, air conditioning compressors and the like eat up more horsepower than you might think. And then there is all that heavy driveline to turn. And on top of that there is the weight and diameters of your tires and wheels.

Not only can you figure rear wheel horsepower, but also you can easily determine what rpm you’ll be turning at your favorite cruising speed if you don’t have a tachometer, and even calculate your likely mileage. And you can do most of the engine corrections that you can do on an engine dyno, though perhaps not quite as accurately. And of course, fixing things can be a lot more trouble with the engine in the car.

Chassis dynos are less expensive and more commonly available, so I recommend that anyone who is building a small-block for the street have the engine checked out before you put your foot in it at the local drag strip. All those expensive components and all that hard work could come to a tragic end if something isn’t right.

Also, if you’ve built a bottom-end torque engine for a big, heavy car, you will most likely want a differential with slightly taller gears than you would want if you had a high rpm screamer in it. Gearing is as important to speed as the engine, and your stock gearing may be all wrong for the engine you’ve built. Check it out on a chassis dyno.

Larger than stock diameter tires have the same effect as higher gearing, Smaller diameter tires mean your engine has to spin faster to go the same distance in the same amount of time. Also, fat heavy tires create more rolling friction and eat up more torque, so you will want to work with various combinations here too. And if you are running an automatic transmission you will want to establish its stall speed and its shift points. Setting your car up based on data from a chassis dyno can make all the difference to its real world performance.