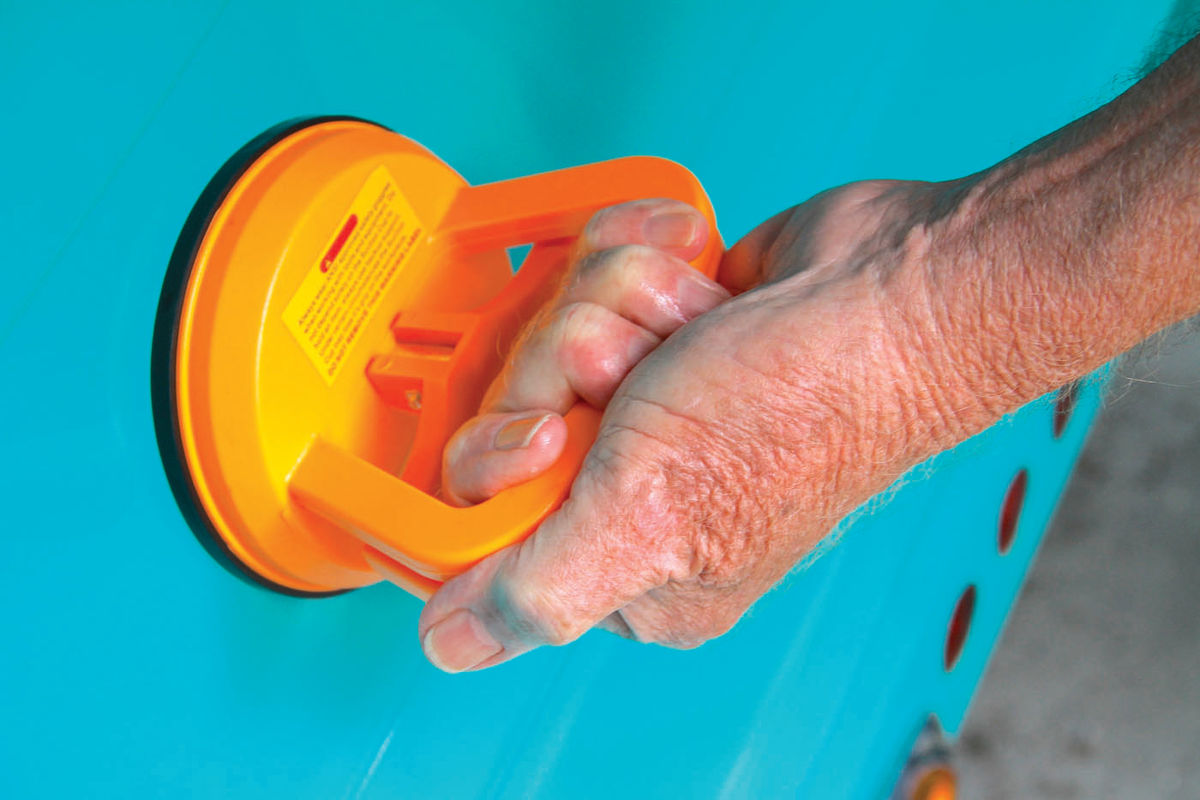 Suck out those dents

I have a 1987 Pontiac Grand Prix that has a few minor dents in it from people setting things on it and from hail damage. A friend told me that you can use a rubber plunger to take out dents without damaging the paint. Have you ever heard of that? Will it actually work, and is there any downside to it?

Suction cups can indeed be used to pull dents out of cars and, in fact, there are cups made especially for that purpose. Often as not, dents only amount to stressed metal and can be popped out completely with no ill effects to the paint. But if the panel has been hit by something and stretched by a point load impact, the suction cup won’t help.

To pull out a fairly broad dent in which the paint is still intact, start by wiping the area clean with water and a little dish detergent. Now smear a little of the soapy water on the suction cup. Push the cup into place and press the handles together to create a vacuum. Pull gently but firmly until the dent pops. You may have to repeat the process two or three times to get the dent completely out. If there are any slight high spots, you can use a soft wooden dowel and a hammer to gently tap them flat.

An ordinary plumber’s helper will work if you have nothing else, and they come in small and large sizes. However, as noted, there are special suction cups made just for body work that are easier to use. I picked one up at Harbor Freight for $4, and while I was there I also bought a kit that uses hot glue for popping out smaller dents such as those hail dimples you mentioned. That kit cost about $13.

The idea of using hot glue may sound crazy but it works quite well, provided the car has its original finish on it, or a high-quality paint job. The glue holds very securely and can easily allow you to pull out small dents and dings. It won’t damage the paint unless it is a cheap paint job, and the kit includes a release agent that will allow you to easily peel the glue off after the dent is pulled out.

To use it you merely insert a glue stick into the back of the heat gun, heat up the glue, and then smear a gob of it onto the puller and stick it onto the middle of the dent. But don’t press down. Give the glue 10 seconds to set up, then attach the cross bar with the rubber pads to the support puller and tighten its adjusting nut a little at a time until the dent pops out. It will usually do so with an audible thump.

Finally, shoot a little release agent onto the gob of glue that is left and scrape it away with the plastic scraper. If there are any slight high spots, you can gently tap them with the plastic dowel included in the kit and a hammer. But tap gently. You don’t want to push the metal back in or damage the paint.

Frequently you will be faced with very shallow dents that can only be seen from certain angles. In that case one of those tubular florescent trouble lights can be used to play a highlight along the surface in order to see the dents clearly. Look along the edge of the highlight for any irregularities. When you find them you can pop them out using either method described above.

Also, in cases where you can get behind the dent, you can use the dowel and hammer to gently tap out any slight low spots.