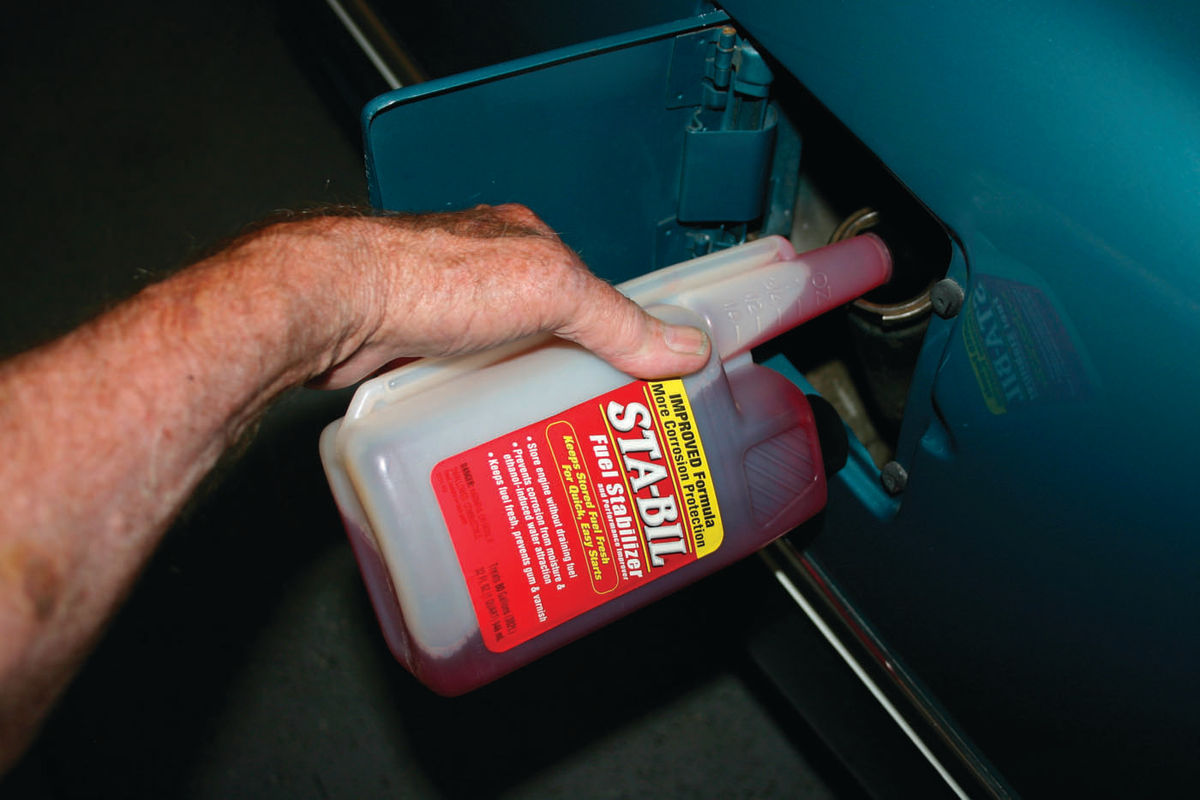 The cold weather is arriving in northeast Pennsylvania and we are putting our cars and trucks away until springtime. My question is: What is your opinion regarding the amount of fuel we should leave in a car’s fuel tank: A half-tank or little-to-none? Also, how about an additive to the ethanol fuel? I add Marvel Mystery Oil to prevent fuel tank corrosion.

I divide my time between the U.S. and New Zealand these days in such a way that I don’t spend winters anywhere anymore. But my cars do, and I have a storage ritual that I use that pays off for me.

As regards fuels for classics, I only need premium gasoline for one of my vehicles, and that is where you find the most alcohol. So only use the high-octane stuff if you need to avoid pinging in a high-compression engine.

Just before putting the car up for the winter I put in the requisite amount of a fuel stabilizer called STA-BIL that is available internationally, and then fill the tank to over-full by topping it off using a gas can when I park the car. I want the tank completely full to the bottom of the filler neck so there is no broad surface of gasoline that meets the air in the tank. That way the only place where the lighter elements in the fuel can evaporate out is the tiny surface exposed in the filler neck of the tank.

I would only do this if the car is going to be stored in a garage with no direct sun or big temperature changes because if the fuel heats up it could run out on the garage floor. My garages are not heated, so it works well for me. The Marvel Mystery oil is a great idea too because it would help keep corrosion under control. Tanks rust out from the inside because as fuel is consumed, moistureladen air is pulled in to replace the fuel.

I take things a couple of steps further though, and change the engine oil and filter to prevent acid in the dirty oil from ruining the rod and main bearings. And because I put so few miles on my cars I only need to change oil once a year. I lube the chassis and do a general service too. Every other year I change coolant because it too will lose its alcohol through evaporation, and lose its cooling ability as a result.

One other trick I use on my classics is to install an electric fuel pump at the rear near the fuel tank to turn on when I need to start a carbureted car with a mechanical fuel pump that has been stored for a while. The pump will fill the fuel line and carburetor float bowl quickly so the engine only needs to turn over a couple of times to start. Otherwise, when you try to start a car that has been inactive for a long time the mechanical pump will only produce one squirt of fuel per engine revolution. That means that the starter has to turn over the engine a number of times before it gets any fuel. This wears out the starter and runs down the battery.

The electric pump can be mounted up inside the frame where even the starchiest show judge won’t bother to look. And then you can mount a simple toggle switch under the dash to turn it on and off. An electric fuel pump also is good to have in case the mechanical one fails, and helps if your engine develops vapor lock on a hot day. But don’t use it all the time unless you install a pressure regulator to lower the pressure.

Finally, I go over all the chrome on my classics with a thick coat of car wax and leave it on. And then when I get the car out in the spring I wipe off all of the wax. I do this because chrome is porous and moisture gets into the little openings and causes pits. The wax fills the pores, so your chrome stays pristine for much longer, especially in a damp environment. I also clean and wax the paint, and then cover the car with a car cover. This process has worked well for me for many years.