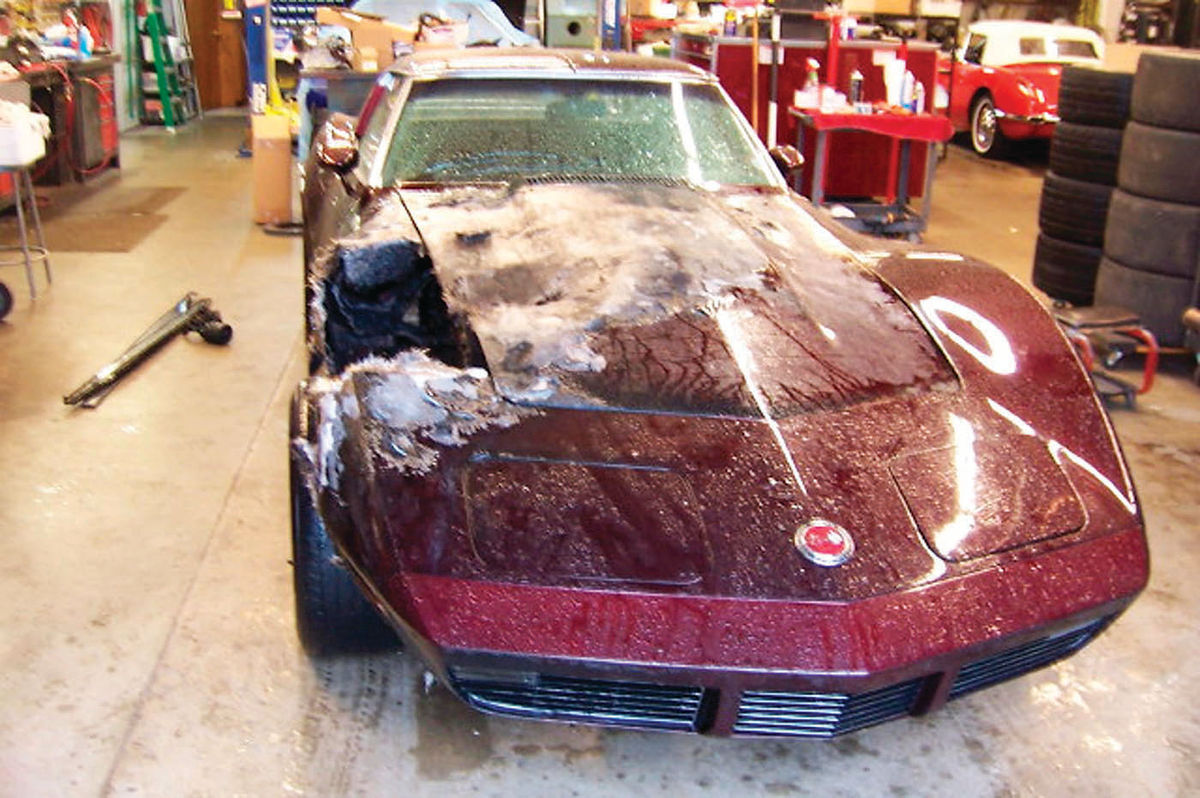 The Tale of a Comeback Car

This “Football Corvette” Looked Like a Candidate for the Salvage Yard. Instead, It Was Restored With Some Special NFL Touches.

Editor’s note: Since we’re in football season, it seemed like an appropriate time to recount the story of a Corvette with ties to the National Football League that seemed to be out of the game for good… until its owner decided that there was still time on the clock for this sports car.

AT F I R S T , GREEN Bay Packers head trainer T. Burris Pepper couldn’t believe what he was hearing over the phone… The 1973 Corvette that he’d spent years restoring had burned as it was being trailered to his home from an alignment shop. By the time the fire department got to the scene, the fiberglass sports car had been extensively damaged.

The fire had burned a hole through the fiberglass right front fender and damage extended back to the cowl. The car’s hood was badly charred, the engine compartment was damaged and the aluminum valve cover on the right cylinder head had melted along one side. (It was later determined that a worker at the alignment shop had laid a rag on a tire near an exhaust header. The heat from the exhaust eventually caused the rag to burst into flames.)

At the time of the fire, Pepper’s Corvette had just over 20,000 miles on its odometer, but the fire left it looking like a salvage vehicle. Given the car’s condition, some owners no doubt would have taken an insurance settlement and bought another car. But this Corvette had a long history as a “football” car, so Pepper decided to restore it yet another time. Fortunately, he had the determination to see the project through to completion, because as the image at the top of this page clearly demonstrates, anyone seeing the car after the blaze might have thought that the idea of restoring this Corvette was an impossible dream.

Saved By the Gridiron

Today, Pepper’s Corvette is known as the “NFL Phoenix” car. The NFL part comes from the fact that it’s been owned by three long-time members of the National Football League. The Phoenix, of course, is a part of Greek mythology where it was portrayed as a long-lived, colorful bird that is cyclically reborn by rising from the ashes of its predecessor.

Pepper had worked for the New York Jets before moving to the Packers in 1993 and it was the Jets’ general manager, Ron Wolf, who sold him the slightly customized Corvette in 1999 when it had clocked 19,875 miles. Wolf, in turn, had obtained the car in 1997 from Oakland Raiders personnel director George Karras who had bought it new and put 19,232 miles on it.

Interestingly, Wolf had bought the car for his son who didn’t like it and therefore put only 643 additional miles on the Corvette during its two years with the Wolf family.

The car originally was white. Its custom touches included a modified T-top, custom striping and side pipes. At some point it’s believed that Karras changed the wheels. These modifications were still on the car when it was delivered to Pepper in July of 1999. The following winter he decided to quickly refurbish the car with help from members of the Corvettes of the Bay car club (www.corvettesofthebay.org) in Green Bay. This quite possibly will sound familiar to you, but what started as a quick project turned into an “unintended frame-off restoration.” The car was completely refinished top to bottom, including a switch to Black Cherry paint, and it wasn’t until May 2010 that the work was nearly complete.

The Football Connection is Evident

The Corvette club members decided to have the seats done with genuine football leather inserts as can be seen in the photo on the next page. This material is made exclusively by Wilson Sporting Goods Co. in its football factory in Ada, Ohio.

While waiting for the seats, the car was trailered to the wheel alignment shop where the fire occurred on May 18, 2010.

Fortunately, the alignment shop had good insurance coverage and after a settlement was worked out, the car was taken to Corvette Sports, Inc., a shop in Sheboygan Falls, Wisconsin, (corvettesports.com).

“Maybe it should have been left for dead,” Pepper said. “But I was determined not to let a car with 20,260 original miles be scrapped, so it was restored into the ‘arisen from the ashes’ car you see today.”

At Corvette Sports the car underwent its second complete restoration. Since the front end and firewall were very heavily damaged, a donor front clip was obtained. Around mid-July 2010, that clip was attached to the rest of the original body. Since the car had already been semi-customized back when it was Classic White and further modified when it was restored in the Black Cherry color, it was decided to restore it in a “personalized” state the second time as well.

What followed over the course of nearly a year was a total restoration with virtually everything about the vehicle being redone or replaced as needed. New front and rear springs were installed along with a 1 1 ⁄8-inch sway bar to stiffen the suspension. Gas shocks were installed, along with adjustable rear struts.

A new front air dam was added to the car along with a new chrome rear bumper. Outside rearview mirrors from a 1975 Chevelle were selected and new tires were mounted on Cragar S/S wheels with 1964 Chevrolet center caps. Hooker side pipes with spiral–turbo baffles carried spent gases from the engine.

A General Motors ZZ4 350 cid crate motor rated at 355 horsepower was installed. It had a Holley 750-cfm carburetor, a March serpentine belt system, a DeWitt aluminum radiator with dual electric fans for cooling and Hooker headers. A Hurst Competition Plus shifter also was installed.

Pepper decided to have the car done in a candy apple red color using a CZZ 307 Green Gold base coat, a CZZ-400 Candy Apple Red mid coat and a Glasurit 923-450 Baking Clear on top. During the body work a removable rear window was added.

As you might expect, the Corvette’s football-themed interior received a lot of attention and work. The seats — that had been redone with the Wilson football leather centers and large NFL emblems just below the integral headrests — had never been put in the car, so they were now installed along with new door panels and carpeting. New floor mats and new door panel inserts were added along with an updated audio deck and speakers and a power antenna. A retro-fit air conditioning system from Old Air Products in Fort Worth, Texas, was installed as well (oldairproducts.com).

When you lift the gas filler cap on the car’s rear deck, you can see the shiny Green Gold basecoat. (The Packers’ colors are green and gold.) When you lift the car’s hood you’ll see the NFL logo on the underside, plus a deflated Wilson football distributor cover and lots of chrome. The intake manifold, valve covers, low-restriction air cleaner, brake master cylinder cover, generator, pulleys and other bits are all dressed up with bright paint or polished, plated metal. Bright-finished braided hoses complete a clean and brilliant underhood appearance.

On June 5, 2011 the car was photographed on the “tundra” (unfrozen, of course) of the Green Bay Packers’ home stadium, Lambeau Field. Normally this would be impossible, as signs warn visiting fans, “Welcome to Lambeau Field. Enjoy this special place, but please, please stay off the playing field.” However, some construction was going on at the time and Pepper was allowed to park his car there for a short time. (The fact that he’s part of the Packers organization probably helped him to gain access as well.)

Drawing Attention With a “Football” Corvette and a Super Bowl Ring

We first met Pepper when he displayed his Corvette at the Road America street car concours during the Kohler International Challenge in 2011 in Elkhart Lake, Wisconsin. (The article’s author is a judge at this annual event.)

We saw Pepper sharing his car — and his Super Bowl ring — with spectators at the Saturday evening car show. Families vacationing at Elkhart Lake’s many resorts had come out to see the classic cars and wound up taking each other’s picture wearing the platinum band with its 18-karat gold trimmings and a diamond for each of the Packers’ record-breaking 13 NFL championships.

But while Pepper enjoys going to car shows, the Corvette’s public appearances are pretty rare because his Packers job eats up much of his time.

However, one “appearance” he did make time for was a trip back to the alignment shop in Green Bay where the trouble had started. He had heard that the young man who left the rag on the car felt really terrible about the fire and Pepper wanted to assure him that he understood it had been an accident. Unfortunately, the fellow was no longer working there. So we’re hoping he’ll read this story and get to see how good the car looks today.