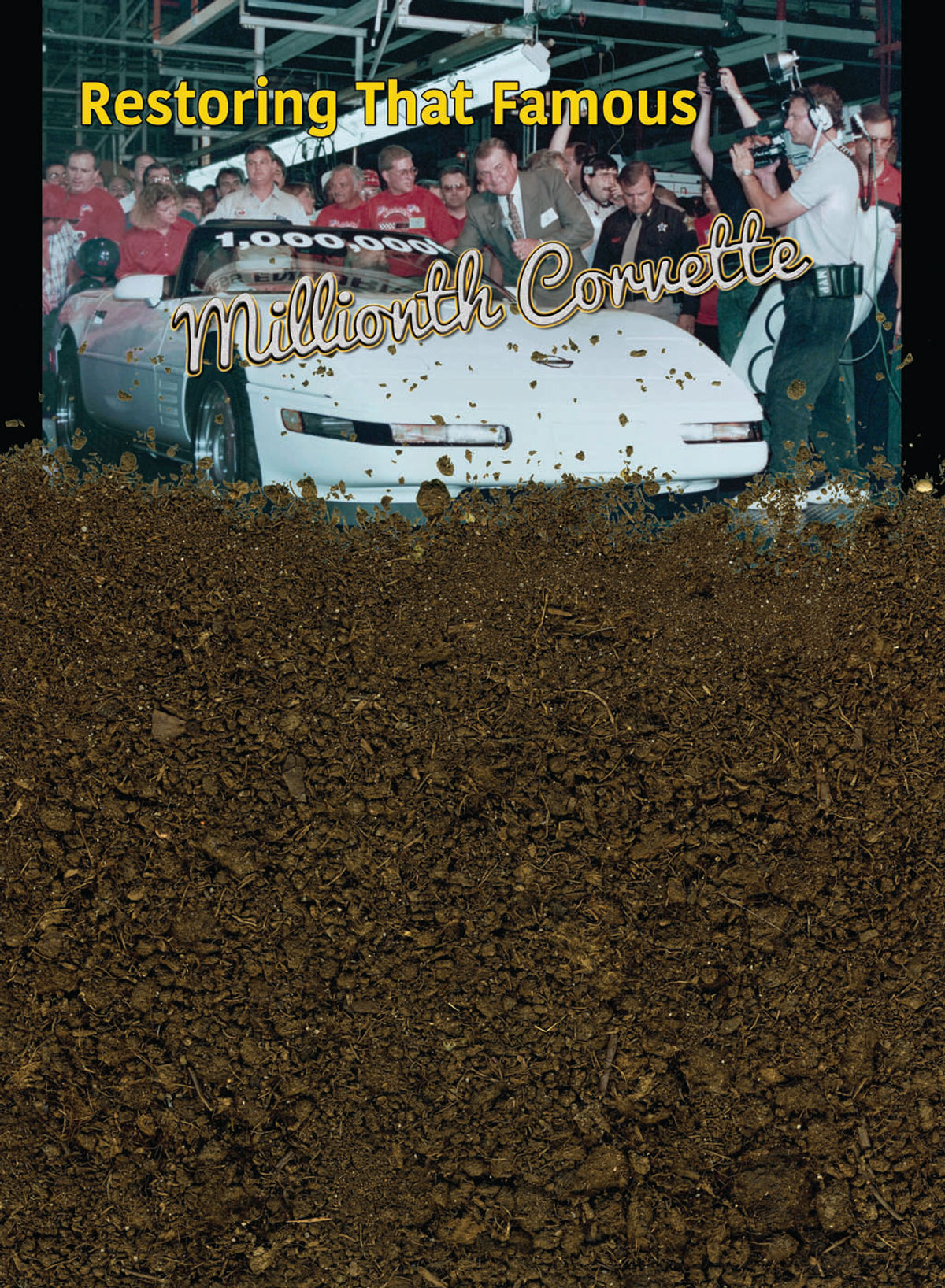 When the Kentucky Earth Swallowed This Milestone Car, It Became an International Celebrity. Now a Team of Pros Has Put It Back on Display.

Imagine that you came upon an extremely rare car that had suffered some extensive damage. I mean it had really been damaged…to the point where it looked like an angry giant had stepped on it, ground it under his massive foot and then kicked it around like a metal, glass and fabric soccer ball.

Well, that was the case with the onemillionth Corvette from Chevrolet. Only this unfortunate car hadn’t been abused by some marauding Godzilla; it literally fell victim to a large sinkhole, tumbling some 30 feet into the pit along with seven other rare Vettes.

You probably recall the incident that took place early on the morning of Feb. 12, 2014 at the National Corvette Museum in Bowling Green, Kentucky, not far from the current Corvette assembly plant.

Like something from a Hollywood disaster film, the incident was captured by museum surveillance cameras that showed the earth slowly opening wide under a car exhibition in the facility’s Skydome. The eight rare Corvettes on exhibit in that section of the museum slowly slid or fell from the cracking floor and tumbled into the sinkhole, most of them turning into semi-crushed classics in the process.

When the ground stopped moving, the freshly developed sinkhole measured some 60 feet long, 45 feet wide and 30 feet deep. Picture someone pushing these Vettes off the top of a three-story building and that will give you some idea of the fall that they experienced.

Fortunately, the incident occurred in the wee hours of the morning before the museum opened for the day, so no people joined the cars in their tumbling freefall.

What Do We Do Now?

Ironically, while museum officials debated what approach they should take to the situation, a surprising upside to the disaster quickly showed itself.

Just as many people can’t help but rubberneck when passing an auto accident or a burning building, lots of folks showed an immediate interest in the Corvette sinkhole. They watched the surveillance video on the TV news or the Internet and then many decided to see it in person, boosting museum attendance significantly.

Given this outcome, for a while museum officials even considered retrieving the cars and leaving the sinkhole in place as a public attraction.

But over time it was decided that the open hole could prove to be an attractive nuisance, luring people to get close to the edge for a dramatic selfie, potentially ending in yet additional sinkhole disasters. A tall fence around the hole was considered, and while that would deter most visitors, it certainly wouldn’t be a barrier against dexterous types who could and would climb over it with ease.

So the decision was made to retrieve the cars, fill in the hole and use the Skydome as an exhibit space once again.

A Well-Equipped and Well-Heeled Restorer Enters the Scene

As noted above, damage to most of the cars was extensive. However, one Corvette, a 2009 ZR1 supercharged supercar prototype known as the Blue Devil, was “lightly damaged” and General Motors restored that one as a six-week project last fall.

The museum’s Maintenance and Preservation Department determined that it would restore a 1962 Corvette and then GM turned its attention to a car of great importance to the corporation, a 1992 model that just happened to be the onemillionth Corvette. That commemorative car had even been built with a white exterior and red interior, just like the first Corvette was attired in 1953. Something had to be done, The General decided.

The company’s milestone Vette couldn’t be left looking like the worst loser in an extremely vicious round of demolition derby.

“As the one and only 1-millionth Corvette, its preservation was important to us as the designers of the vehicle—and as Corvette enthusiasts,” said Ed Welburn, vice president of GM Global Design. “The damage was significant in many ways; however we have one of the most highly skilled specialty shops and team of people in the industry, so they were fully prepared to take on the challenge.”

With that the special Corvette was moved from the museum to the Design Center at GM’s Technical Center campus in Warren, Michigan, just north of Detroit. Some 30 craftspeople and technicians from GM Design’s Mechanical Assembly group, along with GM Service Operations, took on the project. The Mechanical Assembly and the Fabrication Shops at GM Design build concept vehicles and maintain GM’s historic vehicle collection, so you know that the group had the tools, machinery, parts and know-how to restore even a heavily-damaged Corvette.

Once the car was in the GM shop, it was quickly decided to preserve and repair as many of the car’s original components as possible for two significant reasons. First, as with any restoration, a vehicle with original components is more important historically than one with reproduction parts. And second, once the disassembly began, team members found that under the skin, the car had been autographed by Bowling Green Assembly workers who had built the landmark vehicle.

“This…was fantastic and moving to see,” said Mark Reuss, GM executive vice president, Global Product Development, Purchasing and Supply Chain. “It brought the history to life, and reinforced the importance of the project.”

As it turned out, only three of the signed components couldn’t be saved. On two of them, the restorers had the autographs scanned, reproduced as transfers and affixed to the replacement parts. The third part, with a single signature from a Bowling Green employee, was too damaged to save or even scan for the signatures. So Chevrolet had the employee sign a replacement part, making the car “historically accurate down to the last signature.”

Certain parts did require replacement, including the hood, front fascia and the lower panels between the front wheels and doors. However, GM said the replacements “came from a vehicle of the same vintage and color, ensuring authenticity of the parts and materials involved with the restoration.”

A few other components, such as the rear fascia and front exhaust system, probably would have been replaced in almost any other restoration project, GM said, but the team repaired them because they also were covered with signatures.

Other tasks that went into the project included:

The front sub-frame was damaged in the fall into the sinkhole and required straightening.

The wheels were damaged, but reconditioned, with the original Goodyear Eagle GS-C tires.

Rather than replace the scuffed and scratched pad on the instrument panel, its soft cover was carefully removed and replaced to preserve the employee-signed structure beneath it.

The red leather seats, featuring oneoff “1,000,000th Corvette” embroidery on the headrests were damaged but deemed irreplaceable, so they were restored, including a few replacement patches of carefully matched hide.

The 5.7L LT1 engine, transmission and other drivetrain components were inspected and found to be damage-free.

Surprisingly, another component the team didn’t have to replace was the crushed windshield header. When the car first rolled into the shop, an overhead crane was used to raise it enough to make the car drivable. But in the process, the frame pulled up quite close to its original position, and the team decided to save it.

“The header restoration was a wonderful surprise for what everyone assumed would be the toughest aspect of the restoration,” said Bolognino. “With access to the original specifications, we got it spot-on—and even the new windshield glass dropped in perfectly.”

The final touch was replacing the unique “1,000,000th” windshield banner the Corvette wore when it rolled off the assembly line 23 years ago. The computer graphic file used for the original was still available, allowing creation of an identical banner.

Meanwhile, Back at the Museum

As work on the millionth Corvette progressed, the museum re-enforced the sinkhole walls, filled the hole and covered it with flooring. Now the millionth model and the seven other Corvettes are back in the Skydome in the places where they rested on the morning when the ground opened up.

Five of the cars have been judged to be too damaged for restoration but in another ironic instance, the museum has found that more people are circulating photos of the sinkhole-damaged Vettes than of the numerous sleek cars on display at the facility.

Folks also want a special memento of their sinkhole experience, and the museum’s gift shop has sold some 2500 jars of sinkhole dirt and rocks for $10 each.

In an additional effort to stoke this increased level of interest, “late this fall” the museum will open an exhibit called “Corvette Cave-In: The Skydome Sinkhole Experience.”

Through this “Experience,” the museum said visitors “will learn the particulars of sinkholes…as well as what happened, why it happened, details on the eight Corvettes and how they were recovered and restored, and how the building was structurally repaired.”

Summing it up, spokesman Frassinelli said: “…what could have been a really big negative for the museum turned out to be a positive.”

And while we’re summing things up, take another look at the “before” and “after” images of the millionth Corvette we have on these pages. The results almost seem to border on the unbelievable, don’t they?

GM says the job required 1200 man-hours of “painstaking craftsmanship” to achieve these results. However, given the company’s vast resources, the extensive restoration took just a little more than four months.

Feel free to be at least a bit jealous at this point. It’s OK…really.