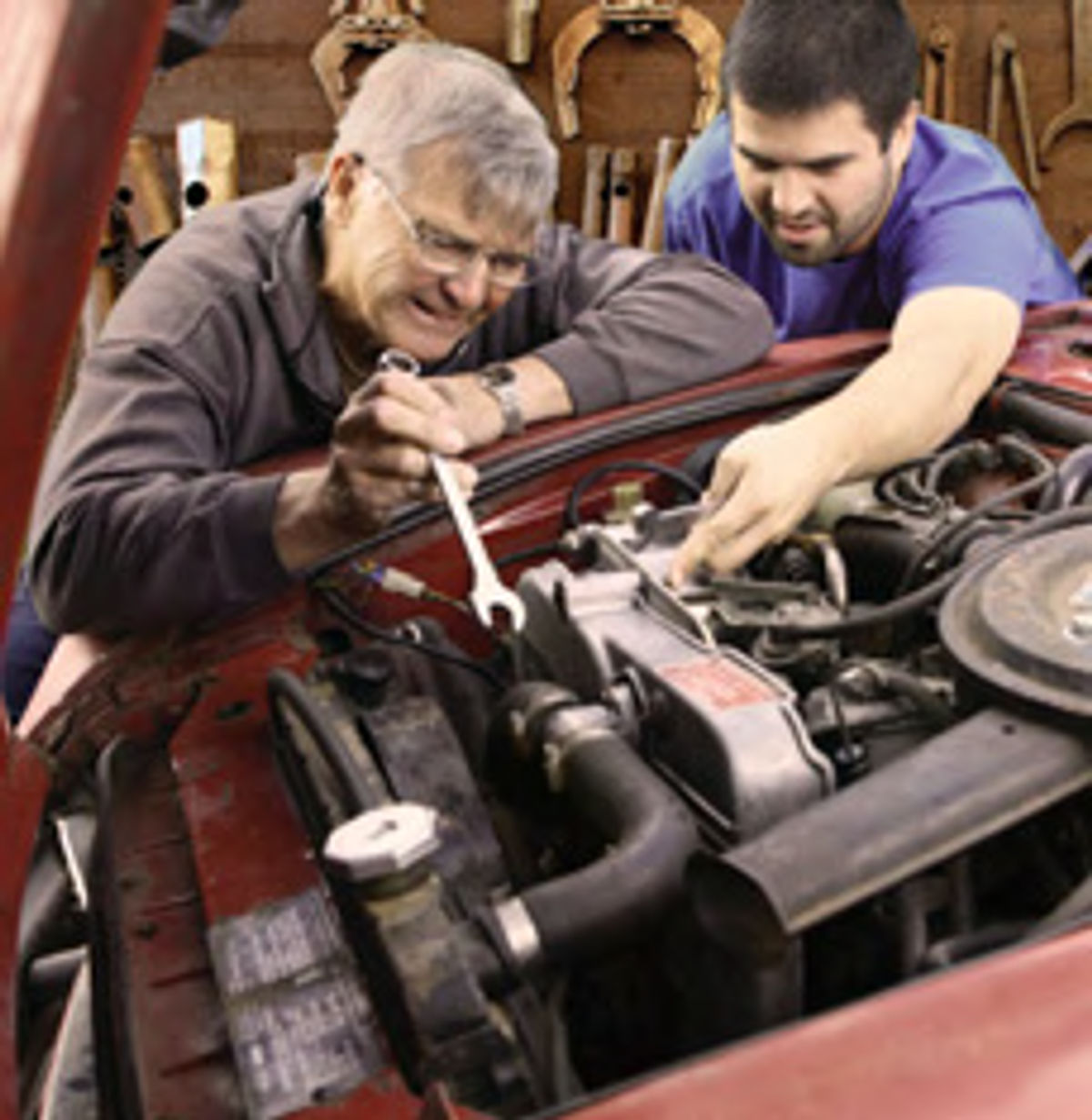 Readers Offer Their Insight Into the Car’s Potential Various Tests to Visual Checks Are Suggested.

In the February issue,reader Jim Nanos Told us that his 1950 Packard with a 288 cid inline eight-cylinder engine and Ultramatic transmission would run fine for a half-hour orso. Then the idle gets very rough, there’s a noticeable loss of power and if he keeps driving for a longer period it will begin to buck and stall out, even at 40-50 mph. Starting the car then requires another half-hour with the hood open.

He said the car warms up in about five minutes and once “everything gets nice and toasty it goes downhill.”

Our Mechanic on Duty writer offered his advice and afterward we received input from several readers including Auto Restorer contributor Milt Webb, a tune-up specialist.

My Packard Runs Fine… For a Half Hour!

In the February Auto Restorer Jim Nanos’ ’50 Packard consistently will not restart after 30 minutes, running rough at idle, and at a 50-mph cruise.

The symptom causes are often tough to cure on 62-year-old cars!

Question, does Jim’s Packard start easily and have good pep before it starts rough running?

Richard Prince, the Auto Restorer Mechanic On Duty writer, offered some excellent checks on tune-up components that could cause these symptoms.

Most of the time component repairs and replacement, service, and specified adjustments cure the symptoms.

My article, “Tuning Up a ’48 Packard” in the April Auto Restorer may offer some additional tune-up tests Jim could try on his ’50 Packard.

I recommend Jim perform all the above referenced tests to locate which circuit(s) are causing the symptoms.

After exhausting all of these measurements and tests, I can offer some differ- ent, more detailed methods to zero in on the symptom causes if they still exist.

The instrument approach: It may help to instrument the battery, ignition and fuel systems.

Then drive the car to record normal data; and then, watch for data anomalies to show up while operating the car at idle and cruise, especially after 30 minutes of operation.

This requires lots of time and perseverance with a helper, and with your available instrumentation.

Ideally, you want to plumb the instruments through the firewall grommets or under the hood back end and windings without pinching vacuum hookup hoses or wiring.

Battery and Ignition System: If equipped, do any fuses “blow” when the engine stalls?

On a 6-volt, positive ground car, hook up an analog (needle type) voltmeter to the coil minus (-) at the coil. Hook up a point dwell meter on the coil (+) distributor point side.

Look for point dwell or voltage anomalies during operation.

The voltage at the coil (-), ignition power side, should stay around 7.2.

Is the rotor gap greater than 1/64 inch? Fuel System: Hook up a vacuum pressure gauge teed into the fuel line at the carburetor. Tape the gauge to the wind-shield on the outside.

Carry a fire extinguisher in the car for possible fire control.

The specified fuel pressure on a ’50 Packard is 4-5 psi. Look for falling pressure during rough running.

Note: Did Jim check the fuel line pickup in the tank and replace the old flex line at the pump inlet? Old lines crack and can “suck air.”

Cooling System and Block Temperature: Jim mentions that everything gets “toasty.” There may be some causes for block overheating, even though the coolant temperatures are normal and the coolant distribution tube inside the block was OK.

Plugging Exhaust: Hook up a vacuum gauge to a manifold vacuum port. Run a long vacuum hose through the right window, taping the gauge onto the inside dash panel.

Measure the vacuum at idle and at a steady 2000 rpm (which is a 50-mph cruise simulation).

Then, measure vacuum during a 50- mph cruise on the road looking for anomalies during rough running.

If vacuums are lower or start to drop off during a 50 mph cruise, it’s possible the muffler system and/or the heat riser is plugging up or becoming inoperative in the “heat on” position, resulting in rough running.

Overheated spark plugs (even new ones) will break down and misfire caused by the extra exhaust heat build- up in the block.

Carbon buildup in the ports or behind the valves can trap heat causing the new plugs to break down.

In extreme cases the timing chain may be stretched causing retarded valve timing leading to an overheated block.

All these tests may only point to which system(s) call for continued analysis, component replacement, service and specified adjustment.

Please forward your good and bad data and let us know your results.

For the benefit of all collectible vehicle owners, all of these tests and measurements are generically similar from car- to-car and make-to-make.

Specified tune-up data will vary. Specifications are well outlined in all old tune- up manuals available from used book dealers and at swap meets.

Some Additional Questions for Checks After the Road Tests/Data:

Is the park-neutral switch working in P and N (no opens or shorts)?

Is the direct drive kick-down switch at the distributor working right?

Check/review wiring diagrams for possible shorts/opens/operation in between the engine and transmission.

All this may be a “stretch” for rough running.

I’m not this familiar with Packard Ultra- matic transmissions. The above comments are from reviewing a Motors manual from the era.

The last owner…poured a bottle of engine fuel additive into the tank while letting the little white cardboard under the cap also fall into the tank and he left it there.

A good resource for factory and/or shop manuals is the California Auto Museum located at 2200 Front St., Sacramento, CA 95818. Visit cal auto museum. org. This resource has a great reference library and the copy rates are reasonable.

Sound data measurements, like those outlined above, will usually lead you to the symptom causes. The trick is to record the anomalies during the operation failures, and then you can objectively investigate the possible causes. Good luck on finding the causes for this rough running.

Milt has done tune-up work on every- thing  from  a  1907  Model  N  Ford  up through various makes of modern gasoline-engine vehicles including some built as  recently  as  model  year  2003.  He’s also  the  author  of  “Tuning  Up  Autos and Trucks—a Guidebook of Solutions for Testing, Evaluating and Analyzing Computer Controlled Vehicles.”

For more on Milt’s book, visit his Web site, milttheinstructor.com.

Debris In the Fuel tank Stopped Me

I bought a 1965 Ford pickup from a neighbor with a similar problem. I’m a diehard Chevrolet man but I thought what the heck I’d chance the flack from all my friends and co-workers and drive this pickup to work.

About 20 miles into the 40-mile run to work, the truck lost power, shuddered and died.

I coasted over to the side of the road, popped the hood and checked for obvious problems. Nothing jumped out at me so I climbed back in, hit the ignition switch and it fired back to life and took me on to work without any incident.

On the way home the darn thing died on the other side of the road within 50 feet from where it had coasted that morning. This time I didn’t even get out of the cab. Thoughts ran through my head like “this is why I don’t drive Fords.” Then it just cranked right up and took me on to the house.

I drove my 1964 El Camino the rest of the week to work and back home. The following weekend I got down to troubleshooting the problem.

This is what I found: The last owner had replaced the fuel tank sending unit however he did not replace the pickup tube sock and as an added bonus he poured a bottle of engine fuel additive into the tank while letting the little white cardboard under the cap also fall into the tank and he left it there.

The cardboard eventually separated into about 10 round wafers. After 20 miles of sucking fuel through a wafer it would block the tube like a defective heart valve. No gas…no run.

Fuel Flow Resistance Was My Problem

A comment on Jim Nanos’ 1950 Packard that runs fine…for half an hour and the comments from the Mechanic On Duty writer.

I had a similar problem with a 1963 Ford 6-cylinder pickup truck that ran fine until it warmed up and then the engine started missing and finally stalled out. (This was reported previously in the June 2011 issue.)

I imagine that electrical resistance is likely to blame with Mr. Nanos’ Packard but the possibility of fuel flow resistance might also be evaluated.

In my case, an obstructed vent in the gas cap caused the problem and was relieved when I ran the truck without the gas cap and later when I drilled a 1/16” hole through the gas cap.

Thanks, I enjoy Auto Restorer.