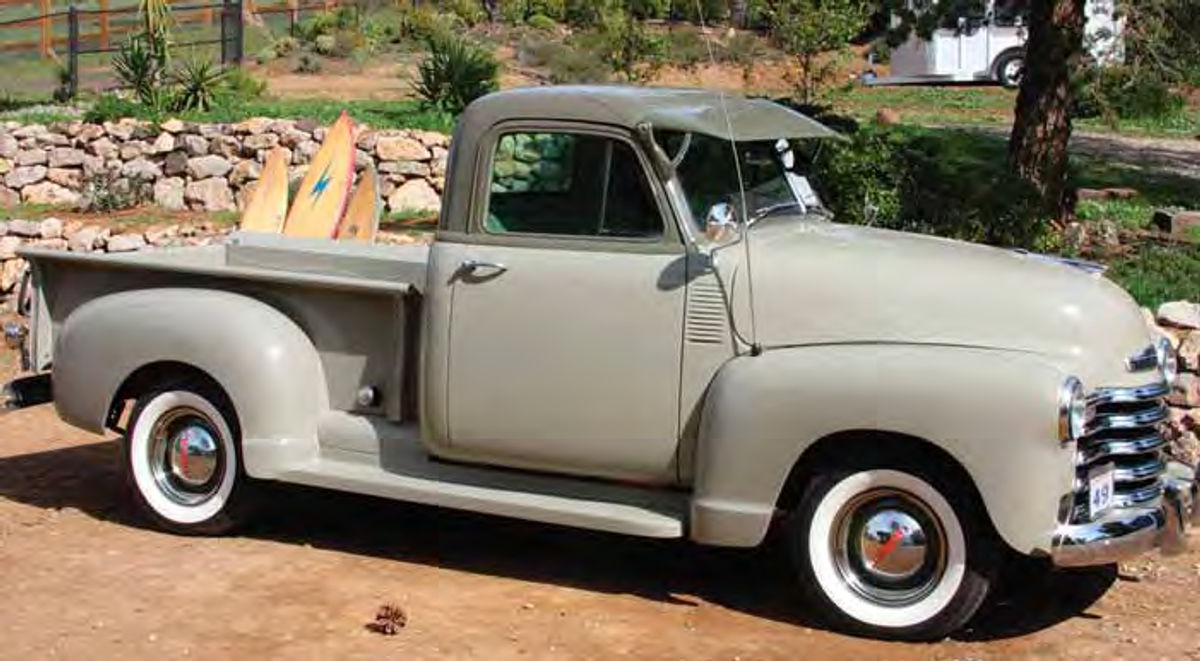 She Wanted a Nice Way to Drive to Work...

MY WIFE, JANE, didn’t want a new truck—she wanted a vintage truck that could be driven every day to work and back. She liked the classic look of the 1949 Chevrolet Pickup truck; its curved and smooth design, flowing from front to back, has left a lasting impact that can still be seen in today’s esthetics of design and engineering.

As luck would have it, there was a Series 3100 1 ⁄2-ton pickup for sale a couple of miles from our house in the Santa Monica Mountains above Malibu. (Since we are a stone’s throw away from the Pacific coastline, we must contend with salt air.)

Ironically, while rust is a problem, it’s not as big of an issue in these mountains as is Malibu mud. During the dry season, Malibu mud is a red-clay dust that can corrode a paint job, brake linings and other moving parts. Because of the abrasive effect of dust particles, rust can settle into the scratches made by the Malibu mud.

The Importance of Visualization

Fortunately, Jane’s vision and realization of what is necessary keeps the project alive. Her perception of the end product gives her the ability to describe in detail exactly what she wants at every stage. This is significant as the restoration is still in-process.

Turning an aftermarket piece into a useful, quality part and keeping the classic appearance is no easy task. And if it’s not done carefully, it can easily run up the cost of a restoration project.

Most often, the nuts and bolts packaged with aftermarket parts are steel or galvanized metal of some type and they rust quickly in our environment. Then we found a store that provides the necessary replacement stainless steel nuts and bolts we needed. So we replace them before, rather than after they rust. Because of the different thread patterns and sizes of both the heads and shanks of various fasteners, we found that the use of small containers, labeled properly with the pieces and locations of the nuts and bolts, etc., made for an easy swap at the store and then the parts were readily at hand when they were needed.

A Need to Chrome New Parts

We learned that the outside door handles and side mirrors we purchased rusted quickly due to the cheaper metal used in the reproduction process, so we chromed them immediately. The metal used in the truck bed is stainless steel.

Rust appeared after the first rain storm on other chrome parts as well. So the aftermarket parts such as the rear taillights surrounds, the grille and front and back bumpers were re-chromed. The added zinc and chroming process gave a utility strength to these aftermarket parts and over time would not rust. As odd as it sounds, to refurbish or chrome a new aftermarket part is normal for us.

Hey, That Brown’s Not Original

When the 1949 truck was new, customers could special order two-tone body color combinations or choose among four solid colors including Maryland Black, Live Oak Green, Monaco Blue or Grecian Gray. When we bought the truck, it wore a weathered metallic brown that was popular in the 1960s—so much for original colors. Furthermore, this thick coating of brown enamel paint covered rust spots well, to the point where rust was visible only by crawling underneath the truck and looking closely at the backs of the metal panels.

Along the way we found out that wing windows were a special order item. This was significant as we had assumed that the doors on the truck, with the wing windows, were from a different year, as most of the 1949s came without them. The new hardware for the wing windows, especially the clips on the swing-outs, needed to be MIG welded so they would not break off.

The Chevrolet Motor, a 216.5-cubic inch Thrift Master Six, was rebuilt. We replaced the radiator with a custom-built 4-row aluminum unit that could withstand the three-mile steep road into the mountains where we live. The fully synchronized manual 4-speed transmission, an option when the truck was new, was in excellent condition. The truck’s frame remained straight with no apparent damage or extreme rust.

She Kept the Project Fairly Stock

Jane liked the bench seat since it blended well with the truck’s classic appearance. She had the headliner done at a local shop along with having the seat upholstered and carpeting installed. The color and texture of the carpeting and headliner had to blend with the unique color of the truck and maintain a classic look.

One thing I’ve learned about working with my wife is that she keeps things centered on the result. The benefit here is that we’ve stayed within the parameters of the classic appearance, rather than it changing, no matter how moderately, to something bordering on a hot rod.

Choosing the colors for the truck did not come easy for Jane, so the paint shop used the time to repair rust spots while she kicked her decision-making process into high gear. Sections like the firewall, the main floor section and the cab area were all in good shape. The front fenders were OK but needed work. The truck bed and sides needed to be replaced due to rust.

The gas tank was frame-mounted underneath the truck bed on the passenger side. In 1949 Chevrolet had changed its gas tank position, placing it in the cab, in back of the bench seat. However, we have more leg room in the cab without the tank joining us, and the stereo speakers are set between the back wall and the seat instead of having the gas tank residing there. Along with moving the tank, the framework was reinforced with a couple of welds on each corner

A battery box is underneath the passenger side floorboard in the cab. Since we had kept the old wiring harness (which we’re now in the process of changing) there have been continuing electrical problems. The battery is inconvenient to jump-start when located underneath the floorboards, so completing the wiring has become a priority.

Modern Braking Was a Must

Jane travels three miles down a steep grade daily on her way to work. She turns onto Pacific Coast Highway and goes another 12 miles into Malibu, so decent brakes are mandatory. The truck doesn’t stand alone here as braking is a concern with all of our vehicles due to the steep grades combined with that troublesome Malibu mud.

So we replaced the pickup’s drum brakes with front discs. We’re also using synthetic brake fluid and modernized the braking system so it’s compatible with the newer type of fluid.

Now the brake system is much stronger and safer, and equal to its task.

It Just Keeps Getting Better…

Jane picked out a superb stereo system that will shuffle up to eight CDs.

The sound is great in the cab, but being an older truck the noise of the tires interferes a little with the sound. We hope to resolve this issue soon…

Now the truck is driven at least five times a week and we are still renovating and changing parts that cannot withstand the daily use, bad weather or rust that are ongoing considerations.

No, the renovation process is not complete yet…but because we see the process as incomplete, we continue to locate better parts and the truck becomes even more reliable than before.